Meet the artists - Introduction to Nicola and Sara

Once I understood that link, I realized that artists have their own contexts, relationships and personalities that influence the decisions they make when they work on their art. So now when I like a piece of art, I want to learn more about the artist who made it and often I find that it gives me new insights into their art. This changes my appreciation of that art, it makes it deeper and more satisfying. 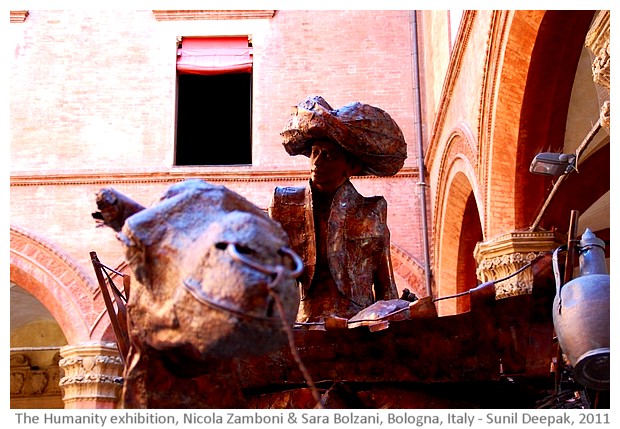 This post is about two of my my favourite Italian sculptors - Nicola Zamboni and Sara Bolzani. In May 2013, I went to meet them at their home in Sala Bolognese, not very far from Bologna (Italy). I am planning three posts regarding this meeting - this first post is about how I discovered their art. The remaining two posts will be about the discussions with them, where they talk about their art and give a glimpse into their lives.

I first discovered the works of Nicola Zamboni and Sara Bolzani at their joint exhibition called "The Humanity" in 2011. This exhibition was held in the inner courtyard of the Accursio Palace in the city centre of Bologna. This is a square-shaped space surrounded by medieval buildings that is commonly used for art exhibitions.

The exhibition was composed of different human-size figures in bronze, with medieval soldiers on horses, scenes of violence, women running away with their children in their arms and their belongings on their heads, horses falling down and persons dying, soldiers raping and abducting women. I was mesmerized by this exhibition and went back to look at it a couple of times. 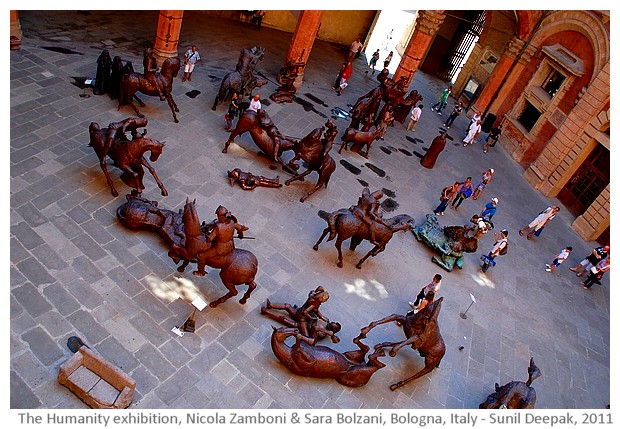 On one hand, I felt that some of the middle-eastern figures of this exhibition, such as the women covered in black chadors, were stereotypes. On the other hand, the unmistakable vitality of the figures had a strong emotional impact on me.

One of my favourite figures in this exhibition was that of a thoughtful angel waiting near a dying horse and a soldier. 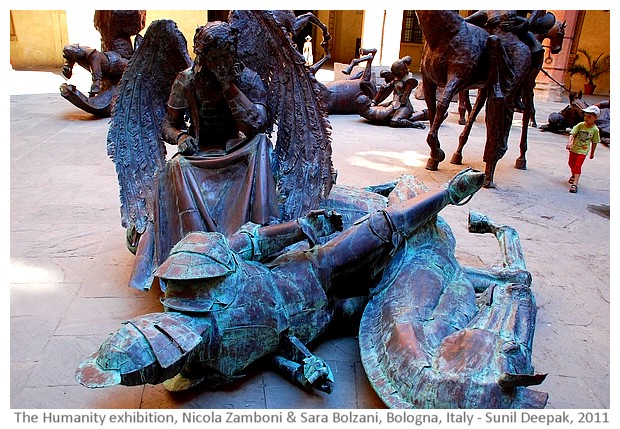 The 12 women of Villa Spada

A few months after the Humanity exhibition, I went to visit the textile museum of Bologna hosted in a 16th century building called Villa Spada. This villa had an Italian garden on a hill - a garden where plants are made to form geometric shapes, which had some medieval sculptures that were damaged. In their place, they had put 12 terracotta statues of women, each woman representing one month of a year.

I fell in love with those statues and felt that they were among the most beautiful pieces of sculpture that I had ever seen. Some time later, I wrote a blog post about that building and about its terracotta statues, in which I expressed my love for those statues and wondered who was the artist behind them? 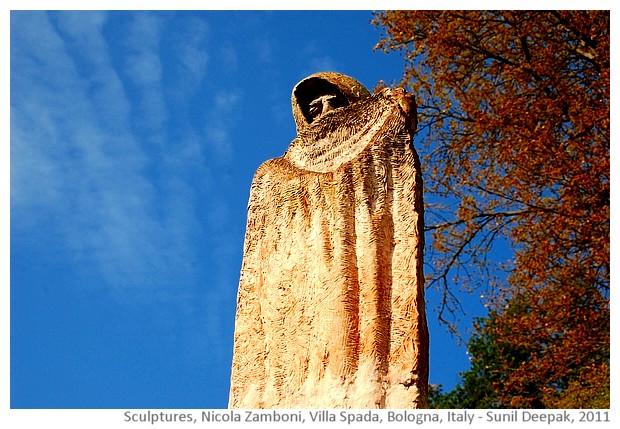 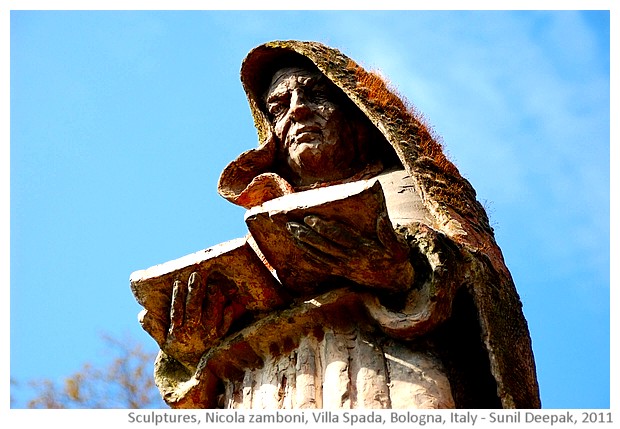 A few months later, some one from Villa Spada, perhaps its owner, wrote back on my blog, specifying that the statues were the work of Nicola Zamboni. I immediately remembered Nicola's name from the Humanity exhibition. I was impressed by the fact that Nicola seemed equally good with bronze as with terracotta.

The Strange People of Pilastro Park

In the beginning of 2013, I visited a park located in the Pilastro area of Bologna. The park had some strange sculptures - of people walking from one corner of the park towards its centre, where they had an open air theatre. The people were without faces near the corner of the park and as they came near the theatre, their faces became more defined. 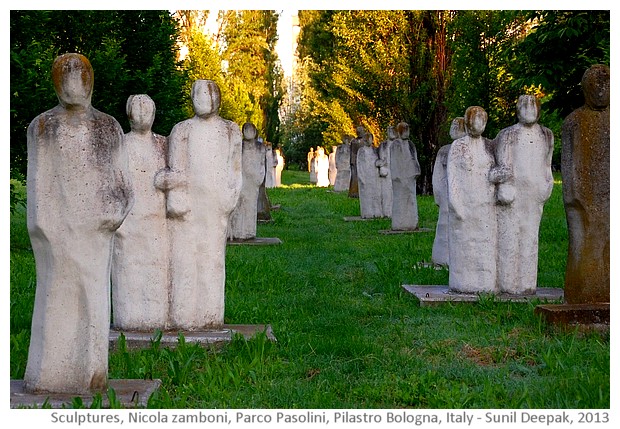 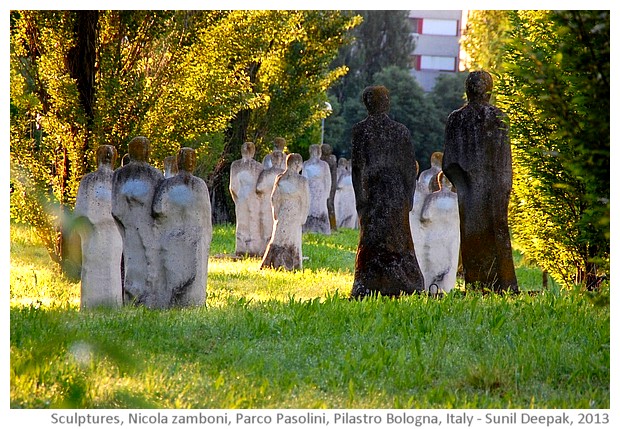 I was a little intrigued by those sculptures in the park. They were completely unlike any other sculptures that I had seen.

One day I did an internet search to learn more about those sculptures and found that they were also the work of Nicola Zamboni. So finally I decided that it was time for me to search for Nicola and try to meet them.

A search on internet helped me to find Nicola's webpage and contact, so I called him. When I told him that I was from India and I wanted to meet him, suddenly I felt his voice change - he was immediately warm and enthusiastic about the idea of my visit to meet him.

"It must be destiny that you searched for us, because we have been thinking and talking so much about India these last few months", he gushed.

Later when I went to visit him, I discovered the reason for his enthusiasm! About this, you can read more in the next post about Nicola and Sara.

In the mean time you can admire this sculpture of Nicola Zamboni from Villa Spada, that I love so much. I think that the woman of this sculpture is disabled, a woman without her right arm, but I am not sure about it. Her face expresses so much tenderness! For tourists coming to Bologna, I always tell them that they should not miss a visit to Villa Spada - these sculptures should be a must for all art lovers visiting Bologna! 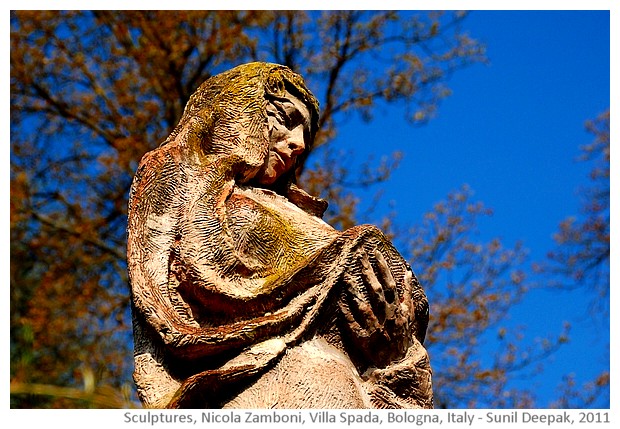