I am a big fan of Kajol (though I was a greater fan of her mom Tanuja and her aunt, Nutan). Over the years she has given some wonderful performances. I wish she would do more films.

Recently while speaking at an event Kajol said that "If you say one gets influenced watching a character, I think it's foolish. Cinema reflects society, society rarely reflects cinema .. Movies show whatever happens in the society. For instance, if a hero smokes on the screen, it is because 90 percent of the country smokes and not the other way round. It's stupid to say one gets influenced by watching on the screen."

I don't know if the news correctly reported her words, but I do not agree with Kajol here. Perhaps she can't think objectively because she is from the film industry and has biased views. 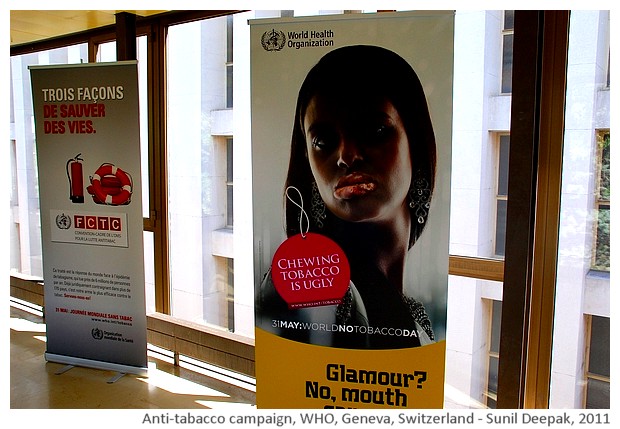 I think that films and famous film stars as celebrities are very good at influencing people. If that was not true, why would companies pay millions to make them as their brand ambassadors and even more specifically, pay to have their product placements in the films? Are all marketing persons in the big companies spending their money in films without being sure that their product in the films will not have any impact on public?

From Sadhana cut hair to Rajesh Khanna style kurta to the motorbikes used by the heroes and Shatrughan Sinha and Rajnikanth's way of flipping cigarettes, all have influenced millions of persons. If you have a child at home and you have seen her dancing with the suggestive gestures of a Chikni chameli or a Badnam munni, you know that films influence people and how much!

So how much can the films influence?

I am not saying that actors and films can change the society. If only it was so easy, films could have helped us to stop female infanticide, stop dowry deaths, increase literacy, stop child labour and stop violence against women. A society takes from films the things that fit that society's values, and if it does not agree with certain things, it may not take them.

Yet, even if certain values are not taken by large parts of society, they can still promote role models and give courage to individuals to fight with the system. That is how biopics like "Bhaag milkha bhaag" or films showing independent young women who fight for their rights, inspire young men and women.

Kajol's argument was motivated in part by the current national guidelines that impose putting up an anti-smoking warning over the smoking scenes in films. I agree that to see such warnings while you are watching a film is distracting and a little unpleasant.

Most Bollywood films are about unbelievable characters in unbelievable situations, so there getting an intrusive reality check does not make a big difference! But occasionally in a good film, the anti-smoking warning in the middle of the scene breaks the film's spell. It takes away from the film. And this rule shoould be changed.

However, having said that, I think that film fraternity from Bollywood needs to look inside its own soul and and ask itself some honest questions. The most important question that I would like them to ask themselves is - are some Indian film-makers taking money to show smoking scenes in our films? May be not directly but indirectly?

I am asking this question since big tobacco companies did pay film-makers and actors in Hollywood to smoke. A research article on this theme that appeared in British Medical Journal wrote:

"In all, almost 200 actors took part in the cigarette endorsements, including two thirds of the top 50 box office Hollywood stars from the late 1930s through to the 1940s. Among others, actors Clark Gable, Spencer Tracey, Joan Crawford, John Wayne, Bette Davis, Betty Grable and singer Al Jolson all appeared in endorsements for brands, such as Lucky Strike, Old Gold, Chesterfield, and Camel.American Tobacco alone paid the stars who endorsed Lucky Strike cigarettes US$ 218,750 in the late 1930s, equivalent to $3.2 million in today's money. Individual stars earned up to $5,000 per year, equivalent to around $75,000 in today's money...The authors say that smoking in movies is associated with teens and young adults starting to smoke themselves, but its persistent presence in mainstream films is rooted in the mutually beneficial deals between the film and tobacco industries in the 1930s and 1940s". 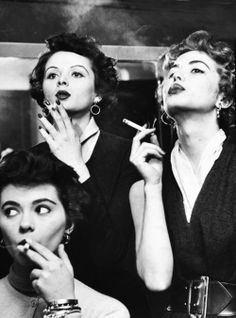 This image on the left shows models trying different poses of cigarette smoking in practice for a TV ad in 1953 (picture by Peter Stackpole ) because tobacco companies wanted to promote smoking as sexy and desirable for women.

Internet is full of reports explaining how tobacco companies have ruthlessly used marketing and paid "experts" to continue to sell their products that are marketed as "feel good, enjoy life" kind of products.

Over the last decade, slowly developed countries are making it difficult for tobacco companies to expand their markets and increase profits - in many countires, percentage of smokers is decreasing. Thus, these companies have increased their efforts in developing countries. In India, reports talk of more than 100% increase in smokers over the past decade.

If you think of tobacco companies trying all kind of tricks almost 100 years ago to influence Americans, I think that today they must be trying 100 times worse tricks to influence people in developing countries!

Role of films in not encouraging smoking

Personally I feel that certain kinds of smoking must be completely stopped from showing in films - no young hero or heroine should be shown smoking as part of school life or college life or with friends or as young professionals, where the underlying message is "smoking is cool, it is ok to smoke for having a good time". I think that India's censor board should be really strict on this, because flashing warnings over such scenes are not enough discouragement.

On the other hand, in my opinion, film makers should have their creative liberty to show smoking if people are in older age groups, or are shown as addicts or having problems or as villains or underworld dons. I think that associating smoking with negative things in films will also discourage smoking among youngsters.

However, if films show the young hero or heroine smoking as has happened in some recent films, I don't think that film-makers can justify it by saying "this scene is essential to my story". Rather, I feel that such film-makers may be taking money from cigarette companies, to do their publicity and influence young people.

Contrary to what Kajol says, majority of Indians do not smoke - according to a World Health Organization survey in 2009, around 12% of Indian smoked. However, that still means a large number of illness and death associated with smoking in India.

And film-makers should work with Government to work in ways that do not promote smoking among young people. Smoking by young people shown in films as "feel good, enjoy" kind of activities must stop completely.

On the other hand, smoking is part of life, to ask film makers not to show any scene with smoking is not realistic. The Government needs to stop insisting that while watching the films we get anti-smoking warnings.

Smoking is not cool, it is dead-cool!