Rainbows in the night

This is a short story I had written in 1976 when I was a final year student in a medical college in Delhi. It was published in our college magazine. These days I am going through all my old files and papers, as I get ready to go back to India after almost 3 decades in Bologna (Italy). Hidden in those papers, I found it along with an illustration that was used with the story.

Even though I feel that it is a little juvenile, I am happy to share it with you! :)

***
Rainbows in the Night

The bluish-grey smoke enveloped the room, forming halos around the faces making them look remote and unearthly. The soft lilting voice of the singer filled the room, reminding him of a murmuring waterfall. He gazed at the singer through the haze of the smoke, she was standing in a corner with a guitar in her hands. Dark, shining hair covered her coffee brown face. Her body, dressed in a dark blue low cut gown, moved slowly with the rhythm of the music, while her fingers softly strummed the guitar. 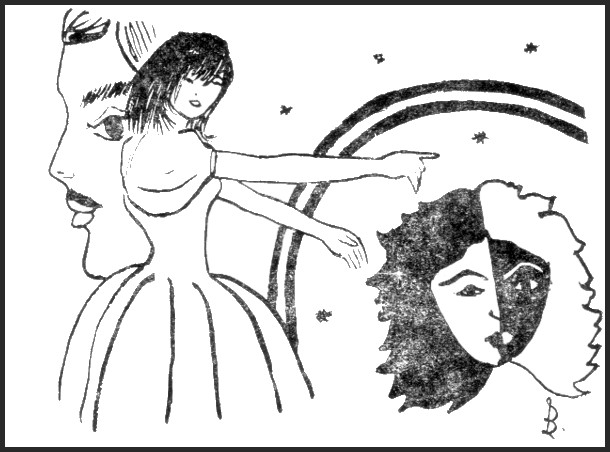 Ravi felt self-conscious, sitting alone in a corner while all others were enjoying themselves. Two guys and three girls were dancing wildly in the centre of the room. Some boys and girls were smoking reefers while some freely consumed whisky and rum. Mukesh, his cousin brother, whose birthday party it was, was sitting in a chair among his girl friends, looking smart and very mod, talking and laughing.

Ravi had come to Bombay for the first time and as he had always lived in a small village, far away from the fast changing life of cities, coming to Bombay had given him a big cultural shock. Mukesh, who was the only child of his rich parents, lived alone in a posh apartment. Mukesh had taken Ravi to show him all the tourist spots of the city and this was his last night in Bombay as he would be back to his home in the village on the next morning. As he had become aware of the big social and cultural gap between himself and Mukesh, he had felt inferior and backwards and now seeing the free and open life of Mukesh and his friends, deepend that feeling of inferiority.

Ravi shifted his cramped legs and tried to make himself more comfortable, while he kept looking around to make sure that nobody was watching him. A feeling of jealousy creeped into his mind as he looked at the boys fashionably dressed, talking confidently with the girls without any hint of self-consciousness and danced freely without any inhibitions. He also felt angry with himself for not being able to enjoy the life like others.

He looked at his watch, it was about ten PM. The night was still young and the thought of spending the whole night sitting there alone, terrified him. Suddenly the train of his thoughts was broken as a girl sat down near him. She looked young, pretty and mod: her eyes were hidden behind big blue glasses and curly dark hair surrounded her face. She was wearing a sleeveless flaming red colour mini frock, the same colour was reflected in her lips and cheeks. She smiled and asked, Do you have a fag? No, said Ravi, I am sorry but I don't smoke. His gaze rested for a few moments on her thighs and he hastily looked away. The girl arched her eyebrows and then sensing his discomfort, suddenly laughed.

Ravi felt as if everyone was looking at him and he could feel the blood rushing into his face and his ears burned red. Another boy offered the girl a reefer and lighted it. She inhaled the smoke deeply and then turning towards Ravi, blew out the smoke near his face. The strong pungent smell of the smoke made him wince and involuntarily he screwed up his nose. The girl laughed again and joined the group of dancers in the centre of the room.

For a few minutes Ravi sat there, feeling stunned and humiliated. Then a feeling of anger slowly replaced the humiliation. "I must have sounded like a real prude", he thought bitterly. Then he got up and left the room and went to the bedroom.

The bedroom was bathed in the darkness of the night and Ravi didn't try to search for the light switch. He lowered himself in the bed trying to lose himself in the anonymity of the darkness. For a long time he listened to the sounds coming from the party room, but gradually the tired eyelids gave way to a deep dreamless sleep.

***
In the morning, as the first sun rays entered the room, he opened his eyes, feeling refreshed. The house was quiet. He looked at the big grandfather clock hanging on the wall. O God! It is five o clock and I have to catch the train at six, he thought, and quickly got up from the bed.

He went slowly towards the party room, trying to recall the scene of the night. The brightly decorated room looked dead and forlorn like a coffin. Boys and girls were lying haphazardly in the room.

The girl who had been singing last night was sitting down on the floor, her eyes dull and vacant, looking at some distant point in the wall, still wandering in the fantasy land of the drug-trip. The girl with the mini frock was lying in the arms of a boy, her frock had moved up, exposing her body indecently. Big blotches of alcohol stained the carpet and cigarette butts were littered all over the room.

Mukesh was lying on the carpet, his expensive suit crumpled, his cheeks hollow and the dark shadows around his eyes. In fact, everybody was looking like Mukesh, like a rag doll. A boy was lying with his head in a pool of dried vomit. Suddenly Ravi felt nauseated.

He ran towards the washbasin and vomited there. Then he washed his face with cold water and looked in the mirror. The mirror reflected a healthy glowing face with eyes sparkling with life. His lips curved into a smile. Suddenly he was very happy.

What a fool I had been, he thought as he packed his things, to be jealous of those poor people who need pity and love more than anything else. They are just like rainbows, glittering and shining, and yet look at them without their drugs and makeup, and they are only shadows.

He picked up his bag and walked out of the apartment towards the railway station, whistling tunelessly and feeling ridiculously happy and serene.