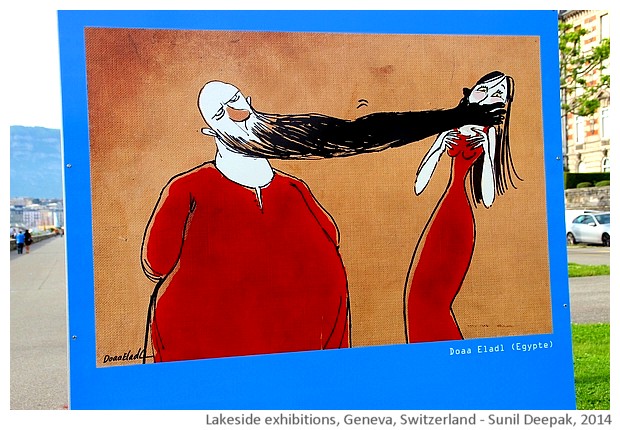 Some years ago I had read an interview of American singer Maxwell, around the time when he had won a Grammy award for his album "Black Summers night". The interviewer had asked Maxwell about the influence of his heritage on his music. Maxwell, son of a Haitian mother and a Puerto Rican father, who had grown up singing in a church choir in New York, had answered, "Your heritage is your heritage, but your soul is truly what you are."

People, not just those who do not know us, but sometimes even our friends, tend to slot us into spaces on the basis of where we come from - our religion, our country of origin, our family, our education. Sometimes we also slot ourselves in those spaces, probably because it is convenient or just a habit. Sometimes we draw walls around our spaces, finding comfort in that which is familiar, and excluding the unfamiliar.

May be similar beliefs lead to creating countries only for those who share similar religions. They choose a specific religion in their constitutions. I reflected on this issue during my recent visit to Israel and Palestine.

The contradictions of Israeli state

The foundations of a Jewish state in Palestine were laid in the 19th century to escape persecution of Jews in Eastern Europe and Russia. Israel was created as a country in 1948 from what was the British colony of the "Mandatory Palestine". The holocaust under the Nazi Germany, during which millions of persons were killed, had created some international support for Jews to create their homeland. The creation of Israel had pushed communities of Palestinians living in that part of land, to the south.

Over the decades since its creation, Israel has gone through different wars, and has continued to push Palestinians in ever-decreasing pieces of lands, occupying them and controlling them.

Travelling in Israel-Palestine, it is not always easy to understand the boundaries of where one finishes and the other starts. I encountered different groups of Palestinians, each dealing with different levels of inequalities, barriers and difficulties under the Israeli occupation/control - the Arab-Israelis with Israeli passports, the Arab residents of Jerusalem, the Palestinians of West Bank and the worse affected, the Palestinians of Gaza Strip. I also talked to some persons working with Bedouins in Israel-Palestine.

I experienced some of these difficulties and humiliations that Palestinians experience when I crossed the Israeli check-points leading into Palestinian areas.

In many ways, Israel is a liberal society - groups that often face discrimination and exclusion in neighbouring countries including the women and the sexual minorities, seem to enjoy more liberties in Israel. Yet, at the same time, it is an unjust society in the way it treats Palestinians.

In the end, my conclusion was that one reason why Israel violates the dignity of every day lives of Palestinians is because it is a religious state. As long as Israel is a Jewish country, it will be unjust towards Palestinians and Bedouins, because injustice (giving preference to the Jewish people compared to persons of other religions) is part of its constitution that is guided by its fundamental idea of being a homeland for the Jews.

I found an echo to my thoughts from an article by Kunwar K. Shahid in The Friday Times about the situation of minorities in Pakistan, another country created on the basis of religion:


It is very important for Pakistani Muslims (97 percent of the population) to differentiate themselves from Hindus. After all it’s precisely this difference that became our state’s raison d’etre in 1947. And differentiating is the first step en route to the development of hatred that eventually inflates into bigotry...

However, what needs to be understood and underscored here is that an Indian Hindu manifesting communal bigotry contradicts the ‘idea’ of India, while a Pakistani Muslim by doing so conforms to the ‘idea’ of Pakistan. Opposition to Hindus, and antagonism between Hindus and Muslims, form the founding principle of Pakistan...

Religions in the constitutions

Israel or Pakistan are not alone in having constitutions that justify and legalize discriminations - it is true for all countries that choose a specific religion to guide their laws. This is true for countries like Iran and Saudi Arabia where constitutions are based on Islam. It is true for countries like Russia, Uganda, South Sudan, and some countries of Latin America, where some laws such as those related to sexuality, marriage and abortion, are strongly influenced by Christian conservatives. In Myanmar and Sri Lanka, officially there is no state religion but the state shows preference for Buddhism and discriminates against persons of other religions.

In European countries like Italy and Ireland, though they are officially secular, in practice, many laws influencing daily lives continue to be influenced by Christian religious ideas. For example, the laws regarding abortion in Ireland. However, most European countries have lot of debates and more open discussions about the role of religions in societies and thus, laws that favour one religion, can be and are increasingly questioned. Thus, Spain, which also had laws strongly influenced by Christianity, has changed many of them.

It is true that culture, religion and traditions are all interlinked. Thus, it is not easy to separate them. For example, there have been discussions in UK about the Christmas lights and celebrations, as being signs of cultural domination of Christian ideas. Similarly there have been discussions in Italy about the presence of Christian crosses and the mandatory one hour for catholic religious classes in the government schools. Recently, during a visit in Cambridge, I was struck by the close links between the different university institutions and the Christian church.

However, such open discussions and acceptance of criticisms are exceptions because usually religions do not accept debate or dissent about what they consider as their fundamental principles.

Religions in the Indian constitution

In India, on the other hand, persons can choose between civil and religious laws. Paradoxically, any calls to end the discriminations and human rights violations inherent in the religious "personal" laws in India are considered as "communal" or against the rights of the religious minorities. Recently, the electoral victory of conservatives has provoked some debates about personal versus a common civil law.

For example, in a recent article, Gopalkrishna Gandhi, asked the new prime minister to ignore "the old and hackneyed demand for a Uniform Civil Code". He justified it by the argument that has been used often in India, that having one common law for all citizens will threaten the minorities.

However, the personal laws of different religions including Hindus, Muslims and Christians, do discriminate - for example, against women or sexual minorities. In another recent article, Pratap Bhanu Mehta, looking at the concepts of "federation of communities" and "zones of individual freedoms" feels that India by focusing on "federation of communities" where group identities are given more importance (through personal laws as well as many other practices), has moved away from the founding ideas of Indian constitution.

It is true that in India, people can choose the civil law but I think that such decisions are easier for educated and better off persons while, the socially disadvantaged groups find themselves mired in "personal" laws. Apart from "not hurting the feelings of the minorities", I have yet to read convincing arguments about how different religious-based laws for different groups of persons are more respectful of the human rights and equality of people.

When countries decide that their first criteria of belonging is going to be their religion, they do not see the diversities in their own religions. I do not know of any religion that is not divided into sects and where persons of different sects do not think that only they are the true followers of their religion. Invariably, some sects assume power and slowly over a period of time, start persecuting their coreligionists from other sects.

When we are part of a majority or powerful group, it is difficult for us to understand what does it mean to belong to a minority group. People from the minorities, especially the conservatives, also create their own power-bases in this system. Thus, changing the constitutions of countries based on religions is never easy.

In my opinion, the U.N. declaration of human rights sums up the best ideas of different religions. I feel that in today's world, the human rights declaration should be the guiding principle of all national constitutions. This is even more important in multi-religious countries like India, where periodically, conservatives of different religions take centre-stage and dictate conditions that go against the principles of human rights and equality of the citizens.

I consider myself as a deeply spiritual person. Growing up and living in an increasingly multi-religious family, it is easy for me to know and respect different religions. However, I feel that our religions belong to our personal spaces. I believe that imposing the ideas of any one religion on the societies through constitutions based on sacred books like Talmud, Koran, Granth sahib, Bible, Ramayan or Manu Smriti, leads to violations of our human rights and conflicts.

Going back to Maxwell's words I also believe that our heritage is just a heritage, but our souls are truly who we are. And, we can't let our souls be fenced in by religions dogmas - at least not in our constitutions. Let religions remain personal choices.

The lakeside in Geneva (Switzerland) is a popular site for exhibitions on issues related to human rights. Here are some images from those exhibitions. 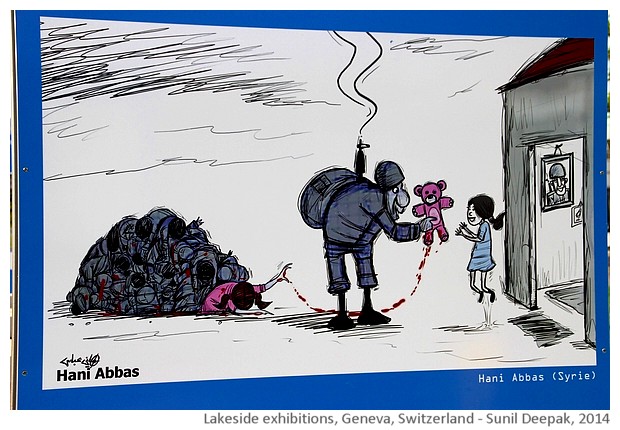 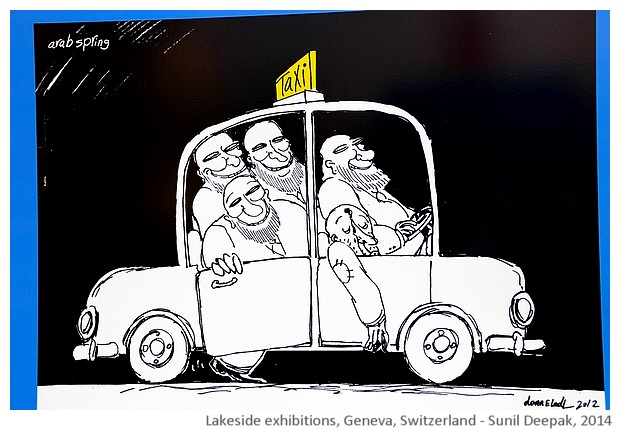 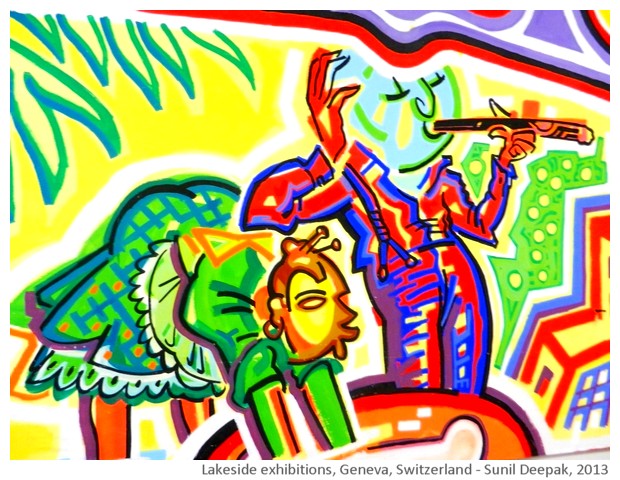 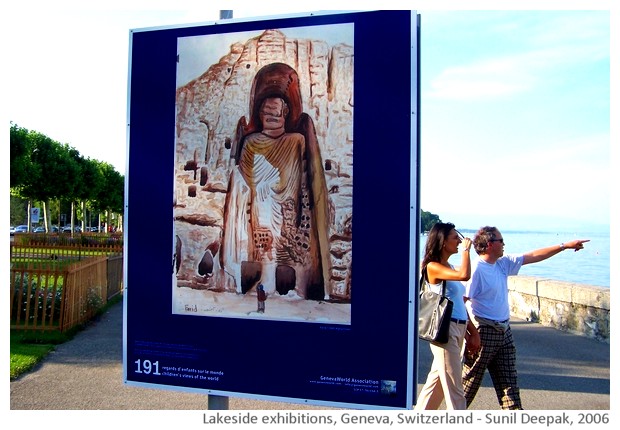 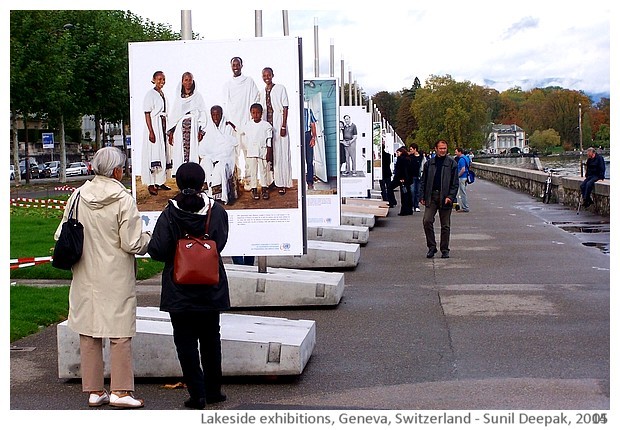 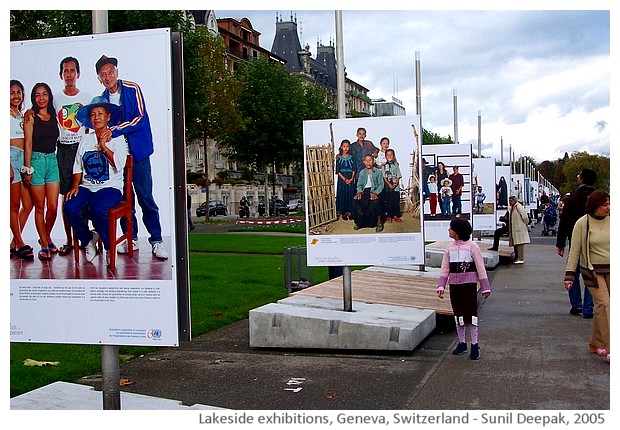 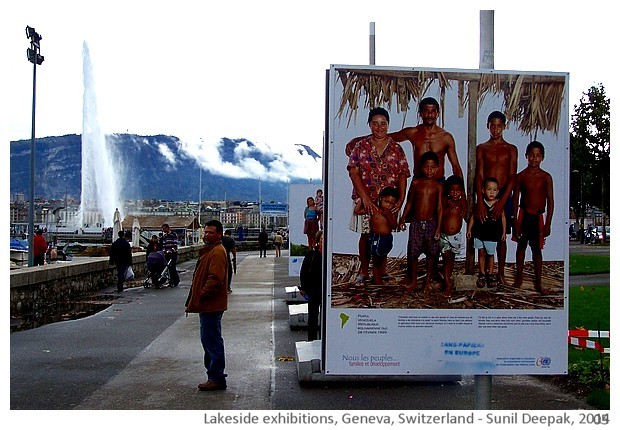