In a meeting, I always count how many men and women are there in the room. As a researcher, it is something that I do without conscious thinking. Categorising persons and placing them in separate boxes is instinctive for me. 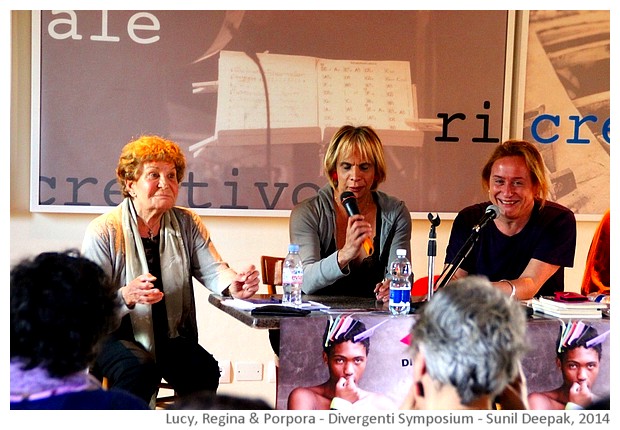 For example, I had been sure that the young woman sitting next to me was trans-gender, but it turned out that she was not. On the other hand, a bearded young man with twinkling eyes, colourful tattoos on muscular arms and an open infectious laughter, had started his life as a girl.

That confusion made me reflect about how diverse and multiple can be our sexual identities, once we scratch below the surface of "Male or female". And, how little the external appearances tell us about the persons. Yet, in spite of that, how much we worry about others' opinions about us!

I was at the first day of a symposium on "Transitions - beyond the surgeons' knives". The symposium was part of Divergenti 2014 - the international festival of trans films of Bologna (Italy). This festival is organised by Italian Transsexual Movement (M.I.T.).

Porpora Marcasciano, the president of MIT, explained the logic behind the symposium. MIT in Bologna runs a government clinic where persons can get advice and follow the process for transitioning (changing the gender with which they were born).

Porpora said, "Transition is about hormone therapies and surgeries, but it does not end there. It can be a process where not everyone chooses the path of hormones or surgery, but for some of us, making our bodies in line with our mental images of ourselves is fundamental. Whatever path we choose, the process of becoming the person we wish to be, goes on. The theme of the symposium and the festival is 'Crossing over' - including the surgeons' knives, but also going beyond it." 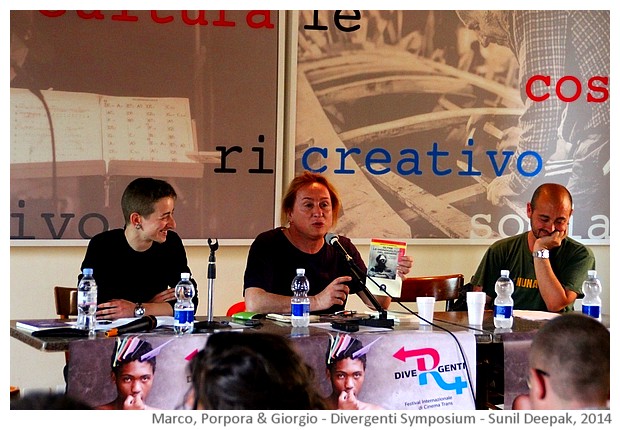 The symposium had different speakers. Here are some of the points that struck me and made me reflect.

All of us sometimes worry about how we come across to others - worrying about our expanding waist lines or wrinkles or white hair. However, in the symposium many speakers talked of "Transia" or Trans-anxiety ('ansia' is Italian for anxiety), that went much beyond our usual every-day worries.

Transia is a never-ending feeling of anxiety of your perceptions about yourself - looking at what is missing in you to be a 'real' man or woman, about how others are going to judge you or find you out that you are false. This anxiety is fueled by real or perceived negative attitudes of others but most of it is about the high criteria that persons with dynamic/alternate gender identities use to judge themselves.

Giorgio felt that FtM (female to Male) men feel less anxiety - they are often not worried about having proper male genitals or other details such as not having Adam's apple. He said, "To be a guy is much simpler compared to being a woman - MtF women (Male to Female) worry about everything and worry so much more." It seemed to me that he was underlining the male carelessness about external appearance compared to the women, as some kind of stereotypical personality trait.

However, I think that FtM men may be less concerned with their body appearance partly because surgical solutions to the desire of having a functioning male genital are complicated and not always satisfactory. Perhaps, if you believe that in any case you are not going to end up with a functioning dick, you can go beyond it and accept yourself more easily? 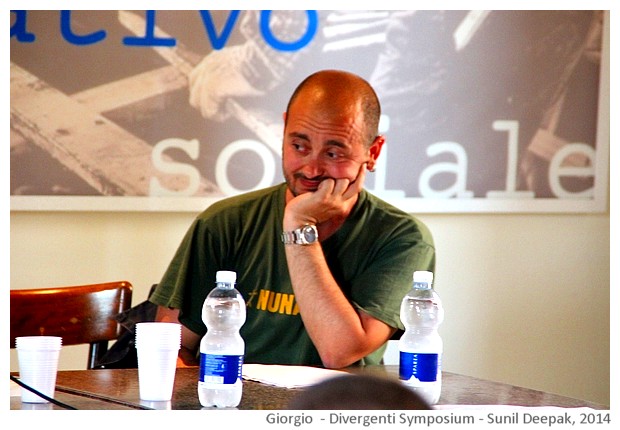 On the other hand, for MtF women, I think that issues are more complicated because they can have perfect vaginas through surgery so that sometimes their partners may not even guess that their bodies were constructed - this raises moral dilemmas of "should I tell" as well as, brings closer the mirage of being a 'complete' woman?

"Men can sit down and urinate without feeling that their masculinity is being questioned but FtM are very anxious about it", Giorgio had said, "This questioning and insecurity never passes. We worry about the models of masculinity and femininity all the time, and confirmations about our masculinity or femininity are never enough, we continuously crave them. The world watching us is something we carry inside us, all the time."

Giorgio gave another example of the way our childhood experiences condition us.

At the end of a dinner with friends, he noticed that all the men rose up and started taking away the plates and glasses to the kitchen while all the women remained sitting, talking. "At first I thought it was good that there was more gender equality", he explained, "then I realised that it was our childhood conditioning. MtF women continued to behave like men do at dinners while FtM men behaved like they had learned as little girls."

This example made me understand a bit about life-long struggle and process of transitioning. Persons do not become men or women just because they change their genitals through operations - changing their feelings, way of thinking and behaviour, probably continues for all their lives.

"Transition is a moment - at least in the beginning, when you start hormone therapy, experience your new puberty, discover new sensations, new name, a new you, the joy of coming out", Giorgio said, "they call it 'gender euphoria'. Then you discover that transition did not end there, that your past history does not get cancelled, so you start a lifelong process of transition."

Different persons touched on technological advances and what it can mean for the the trans-gender persons in future. For example, some persons talked about the possibilities of creating perfect vaginas, ovaries, dicks and testicles from the advances in stem cell technology that can be implanted to have 'perfect' bodies.

At the same time, different persons talked about the difficult psychological processes and lifelong search for relationships, that will not be resolved by the technical advances.

Another area of discussion was related to internet - some persons complained about the confusion, unrealistic expectations and wrong advice from discussion forums and chats.

Others defended the importance of internet in reaching out to persons living in areas where there are no information or support services  and in finding information materials and guidelines from other countries. 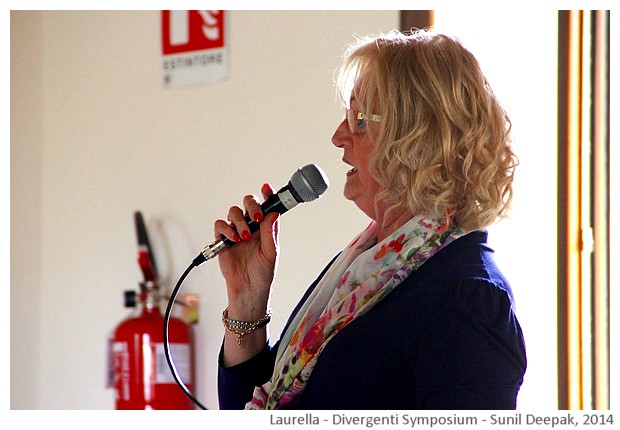 Personally I think that complaints about 'dangers' or 'uselessness' of internet are like complaining about your families or friends - it is easy to bitch about them because they are there. A world without internet would be a huge set back for marginalised groups like trans-gender persons, even more so in certain parts of the world, pushing them back into lives of complete isolation.

Who can call themselves trans? Regina raised this question.

When does a MtF person become a woman or a FtM become a man? The desire is a spectrum that can vary from occasional feelings to an all consuming need that wants to cancel the unwanted parts of the body and make a new body in line with one's feelings. On this spectrum, who and when can someone define her/himself as a transgender person?

One of the women had very strong feelings about it - "To call oneself a trans has become a fashion. These men and women, they live ordinary lives, have sex without angst, but in the parties they like to show off and say that they are trans. Where is their trans experience? We need to fight them and throw them out."

This discussion reminded me of similar discussions among the persons with disabilities where they sometimes fight about who is really disabled and who has the right to be the community's spokes-person.

In my opinion, only we ourselves can choose how to define ourselves - we decide if what we feel or think is trans or non-trans, we decide where we see ourselves in the spectrums of gender identities. Only when this self-definition is linked to practical gains in daily lives - for example, to get a job or to get benefits - we need some objective criteria to define who can get those benefits.

This is not a summary of everything that came out in the symposium - rather some notes about things that struck me.

There were some things that I wish I could have learned more about. For example, in the meeting there was Lucy, a ninety years old trans woman. In 1944-45, she was sent to the concentration camp in Dachau because of her being a trans-gender person. I think that it will be wonderful to talk to her to know more about her life. 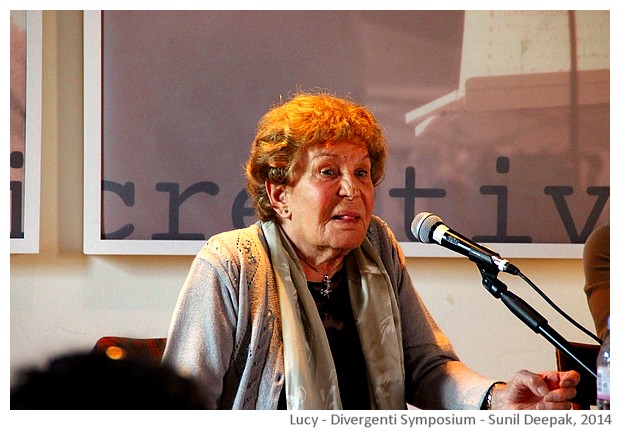 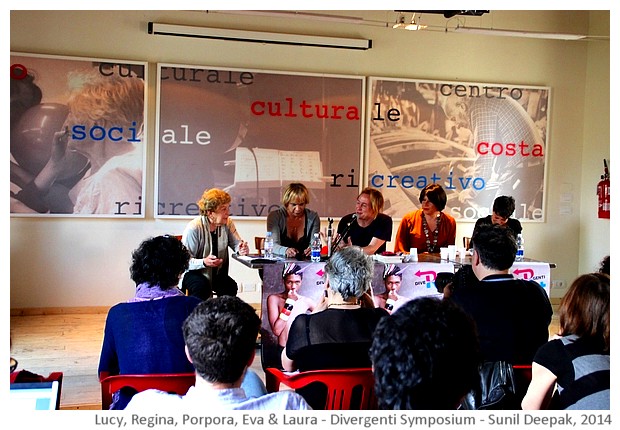 In a poetic intervention, Marco had said, "Our fault is that we threaten the male-female dichotomy. People continuously ask us - who are you? what do you have between your legs? And, we have this huge desire for 'normality'. How can we live in another way of imagination? Our paths are so variable - some of us wish to go from X to Y, others do not wish to go anywhere and prefer to live on the borders. Who transitions and where? May be the society needs to transition?"

I think that Marco's words sum up wonderfully many of the ideas of the meeting.

This is my first post about "Divergenti 2014" - I am planning to see some of the films in this festival - I will write about them in the coming days.