This post is about exploring two little-known small towns, full of history and culture, located in the north-east of Italy - Palmanova and Redipuglia (pronounced Redipulia). 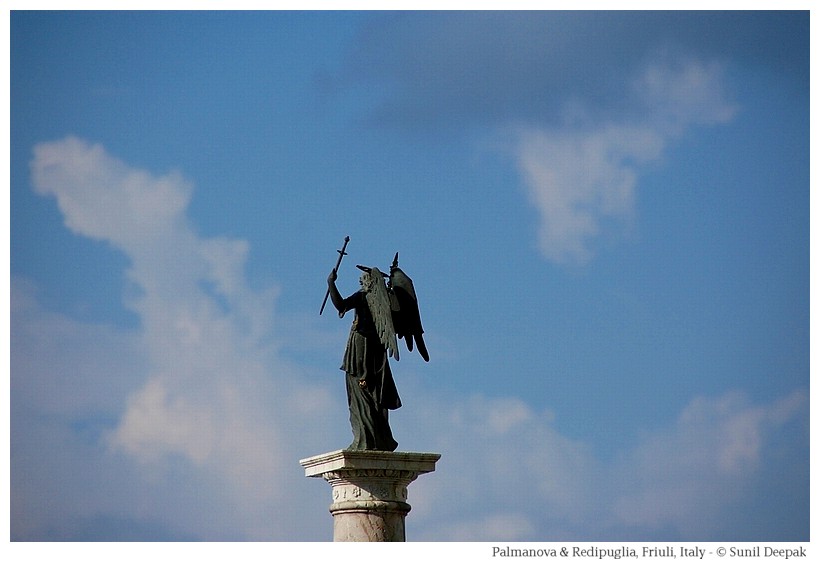 Adriatic coast of Italy, is a well-known summer-holiday destination. Every year, between June to August, towns like Caorle, Jesolo, Portogruaro, Bibione or Lignano, get full of tourists from different parts of Europe.

If you are holidaying in any of these places, you can also explore some of these neighbouring towns that are so rich in history, to add a touch of culture to your seaside holidays. During our holidays the Adriatic coast, one day we went to visit Palmanova and Redipuglia.

We started this trip in Bibione where we were staying for holidays and our first stop was Villa Manin, a fifteenth century villa near Codroipo. The journey through beautiful countryside and gentle hills took about an hour.

The tiny town of Codroipo was first built in the Roman times. Villa Manin is in Passariano, a suburb of Codroipo. Though parts of this building are a thousand years old, it was mostly built in 17th and 18th centuries. It was the residence of the last Doge (head of state) of Republic of Venice, Ludovico Manin.

The king of France, Napoleon Bonaparte and his wife Josephine, had stayed in this house for about 2 months in 1797 when Napoleon's troops had come to "liberate" this part of Italy from the Austrians and the Papal rule.

The day we visited it, it was getting ready for a music concert by the famous American music group called "Kiss". Crowds of young persons were sitting outside its gate blocking the whole area. Thus it was not possible for us to visit it. So we continued our journey to Palmanova.

The Octagonal Square of Palmanova

Palmanova, a tiny town in the north-east of Italy was a part of the Republic of Venice. In 16th century it was the site of war between the Venetians and the kingdom of Haspburgs from Austria. Thus big fortification walls were built around the city. 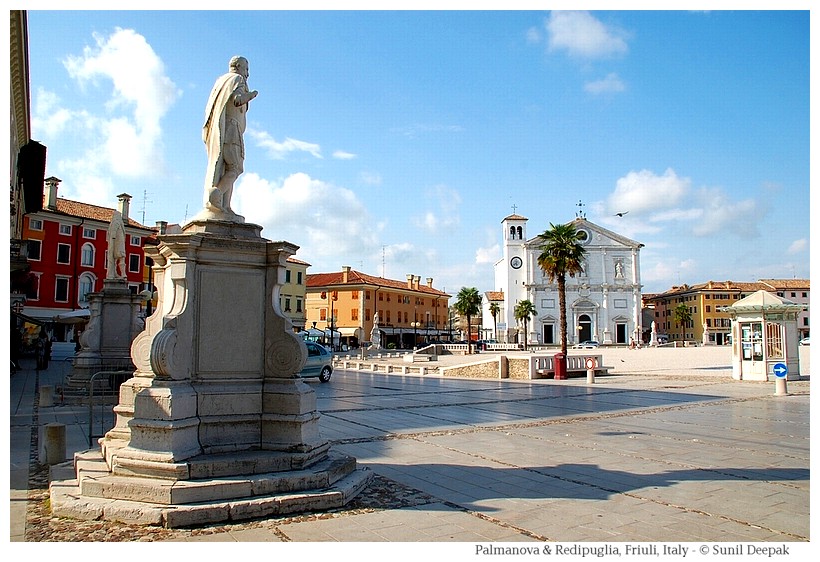 The most important place to see in the city is its huge octagonal (eight-sided) city-square, adorned with the statues of its valorous generals and other authorities. Near some statues there is a small description about the person. A walk around this square will introduce you to the history of this town. As Palmanova had lost the war to the Austrians, the Austrian army had cancelled most of the names from these statues, so you can not identify all of them. Still I think that the Austrians were very civilised, because they left the statues intact and only removed the names!

On one side of the square is the cathedral of Palmanova built with white stone, that is worth a visit. The street surrounding the octagonal central square has many bars and coffee shops.

It was good to sit there, drink something (we had a lovely mojito with fresh mint) and watch the slow easy life of a small town pass you by. 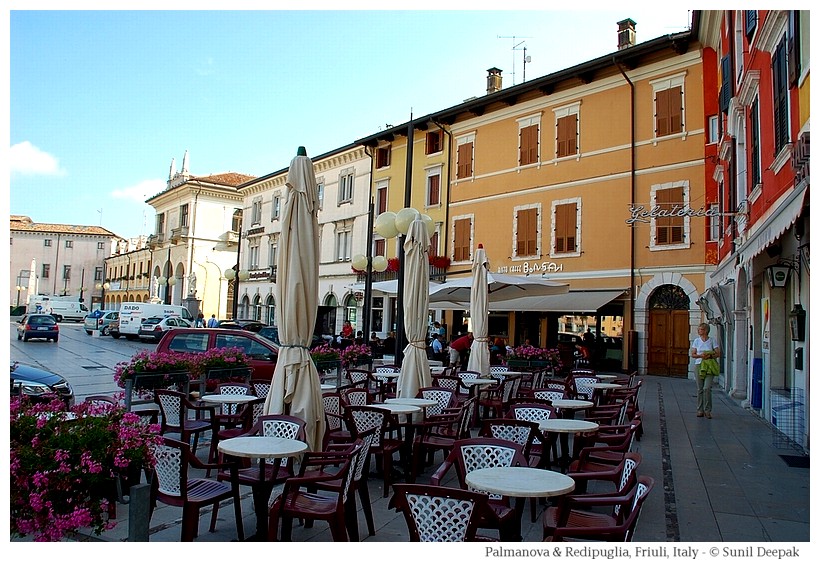 Our last stop for the day was at the monument for the Italian soldiers who had died here during the first world war.

The hills near Redipuglia had been the theatre of a bloody battle that had taken the lives of thousands of soldiers. This monument was built during the years of Fascism in 1938 and was inaugurated by the fascist leader Benito Mussolini.

The imposing monument has one hundred thousand (one lakh) graves and is built in the fascist style, as a pyramid with rectangles, squares and clean lines. About 40,000 graves carry the names of the persons buried there, the remaining 60,000 bodies were not identified. 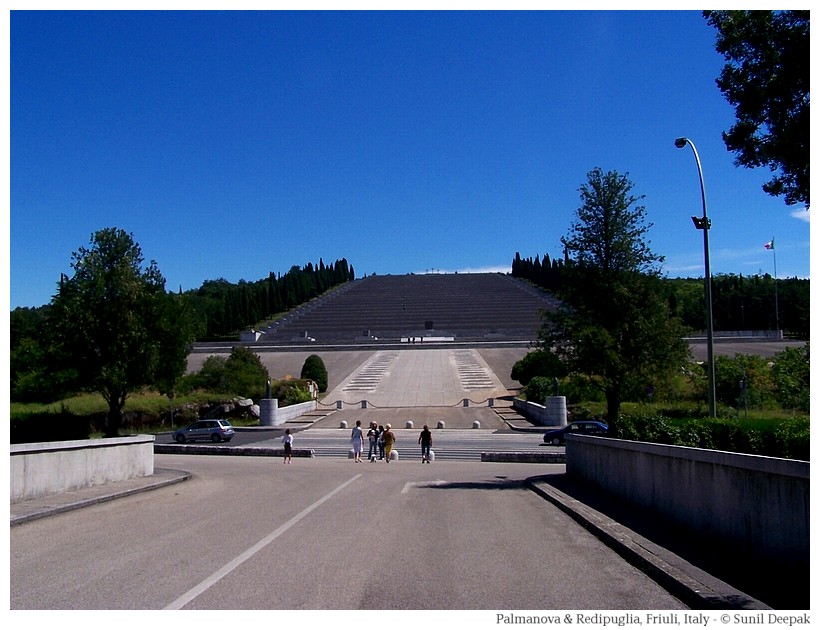 The geometric shapes and the symmetry of this monument attract photographers in search of new angles to click its images. 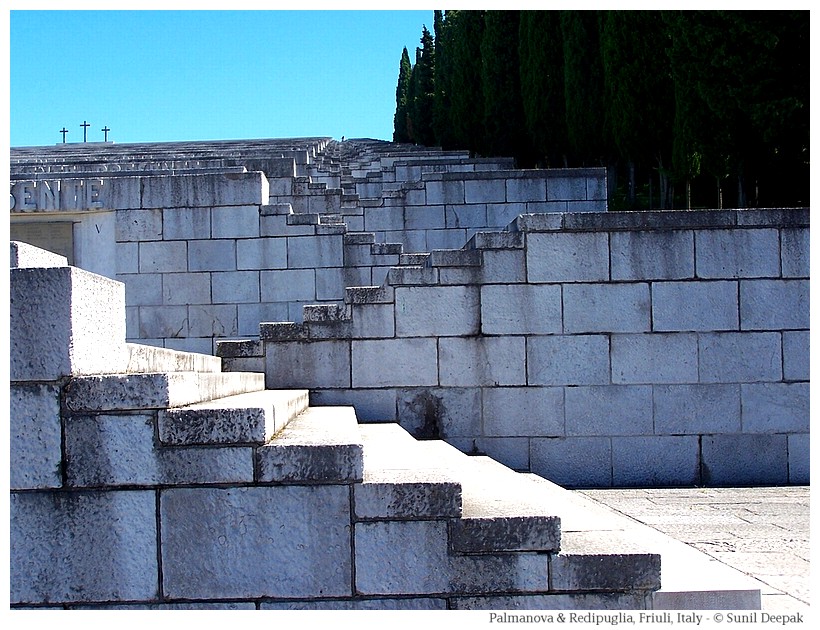 Across the road, there is a military museum. On the side of the museum, on a small hill there are other memorabilia from the first world war, including the statue of an eagle that usually represented the fatherland in fascist mythology and canons used during the war. 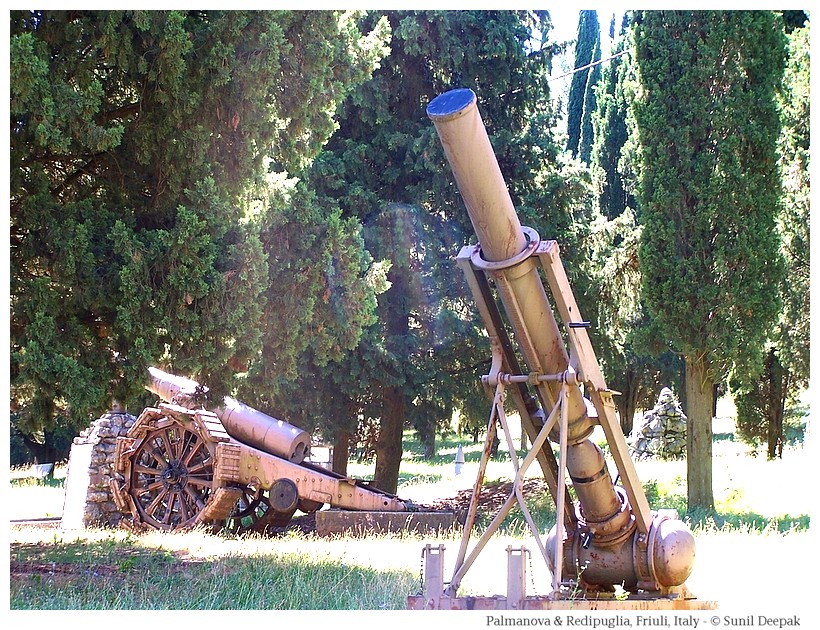 I hope that my brief descriptions will help you to decide if these trips are worth your while! If you decide to go there, do tell me about it.