Some of the most beautiful places in the world have been used as prisons. Nagashima in the south-west Japan was one such island which became a sanatorium-prison in the early part of 20th century. Its prisoners had not committed any crime, they just had an infection called leprosy. During my recent visit to Japan, I had the opportunity to visit Nagashima and to learn about its history. This post is about that visit.

Nagashima (Naga = long and Shima = island) in Setouchi (Okayama) is a 9 km long beautiful island. After years of being seen as a place of fear, it is now changing its image. 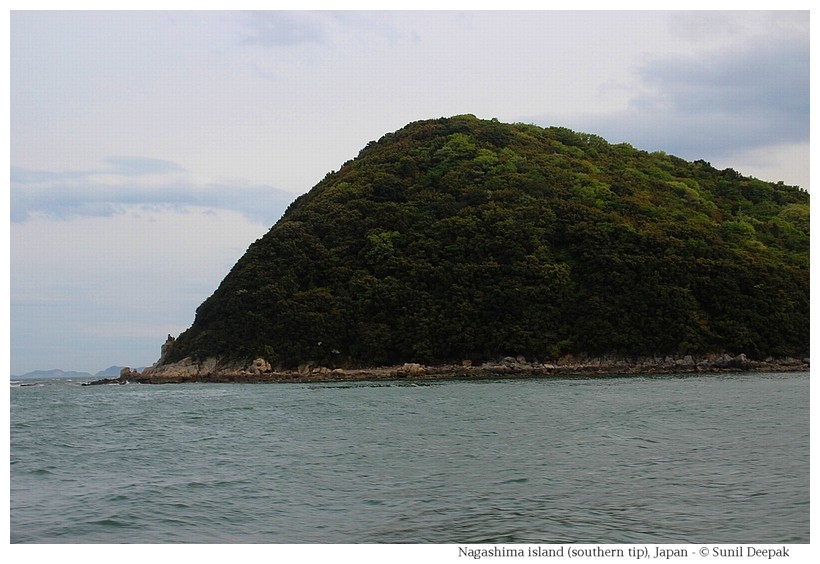 The sea all around Nagashima is famous for its oyster farming. It is now connected to the mainland by a new bridge - the Oohashi bridge. It is surrounded by farming and fishing communities. 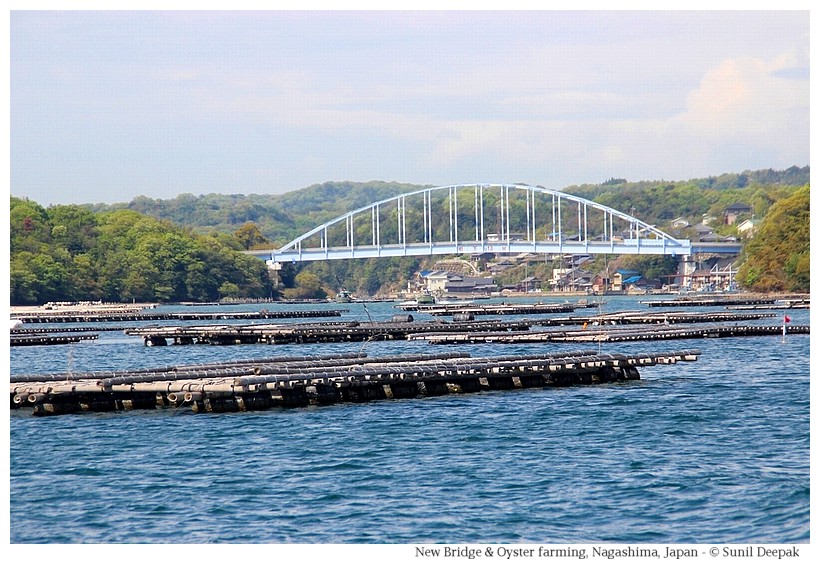 Nagashima As A Place of Exile

In 1930, the Japanese Government decided to create a leprosy sanatorium (Nagashima Aiseien) on Nagashima island.

A few years later, in 1934 the floods destroyed Sotojima Hoyo-in leprosarium near Osaka, killing 173 persons. Before the floods they had tried to shift to a safer place, but local residents did not want them. 416 survivors of the floods wanted to go to a new centre in Osaka but local persons did not want them, so finally they were relocated to the opposite side of Nagashima island to create a second leprosy sanatorium called Oku Komyoen.

Many people who lived on Nagashima changed their names so as to not cause problems for their families.

Doctors thought that by isolating the patients on an island they will stop the transmission of the disease. Over the next few years, the health authorities made very stringent laws limiting the lives and dignity of persons living on Nagashima island. For example, the women were sterilized and forced to abort.

Ancient treatment for leprosy was with Chaulmogra oil. The first modern treatment of leprosy with a Sulphone medicine (Dapsone) started after the Second World War. In the 1970s, more medicines for treating leprosy were discovered and slowly countries started treating leprosy like any other disease. 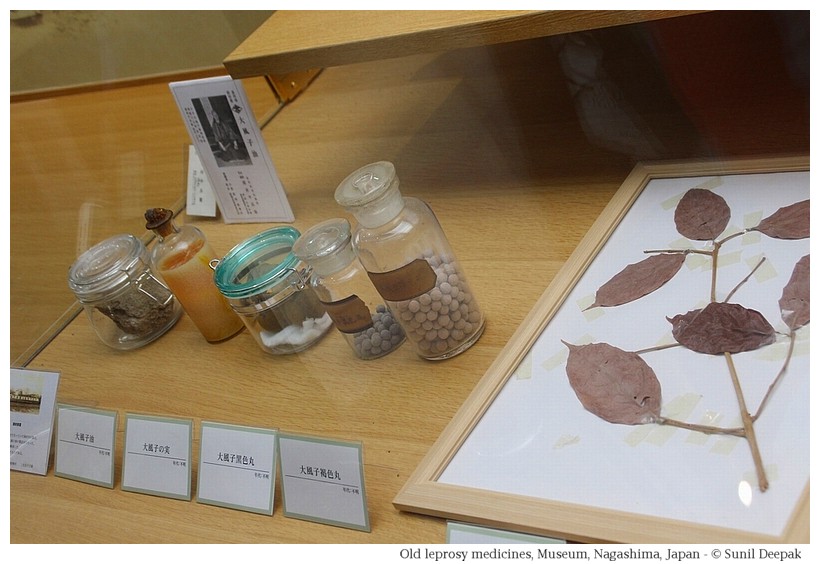 In 1996 the restrictive laws regarding leprosy sanatoriums in Japan were abolished and the leprosy affected persons of Nagashima were finally free. Over the years, thousands of persons affected with leprosy lived as prisoners in this island. Today in the two settlements there are still residents (about 400 persons), most of them very old.

A couple of weeks ago I visited Nagashima island during a meeting organised by Sasakawa Memorial Health Foundation (SMHF) on the conservation of history of leprosy. During this visit we were accompanied by persons who had lived their lives in the sanatorium. This visit was an opportunity to see and understand their lives on Nagashima.

The image below shows Mr. Yamamoto, who had lived in Nagashima for around 70 years, ever since he was brought here as a young boy. He was our guide for this visit. Together with him is Ms. Kanae Hirano, our translator from Japanese to English. 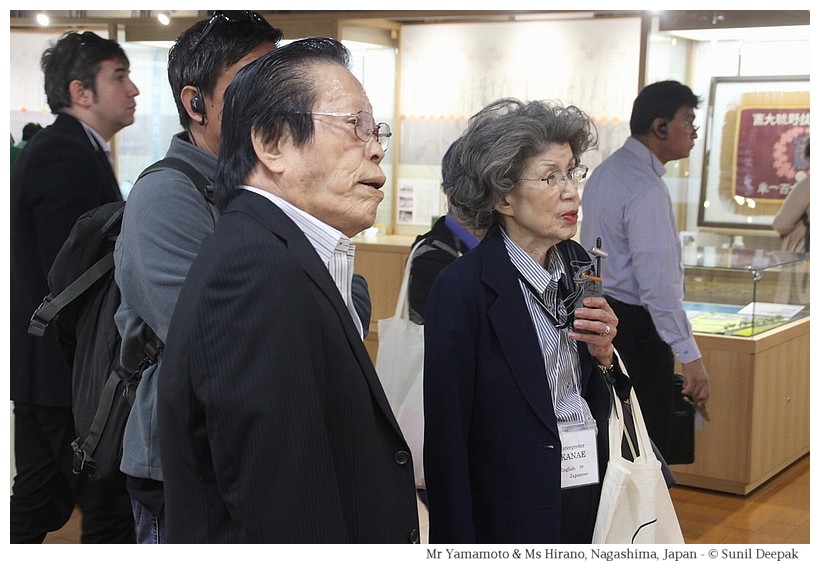 I want to mention a few things which made a strong emotional impact on me during this visit.

As we went up and down the hills of Nagashima, it was impossible not to be entranced by the beautiful panoramas of the islands and the sea. 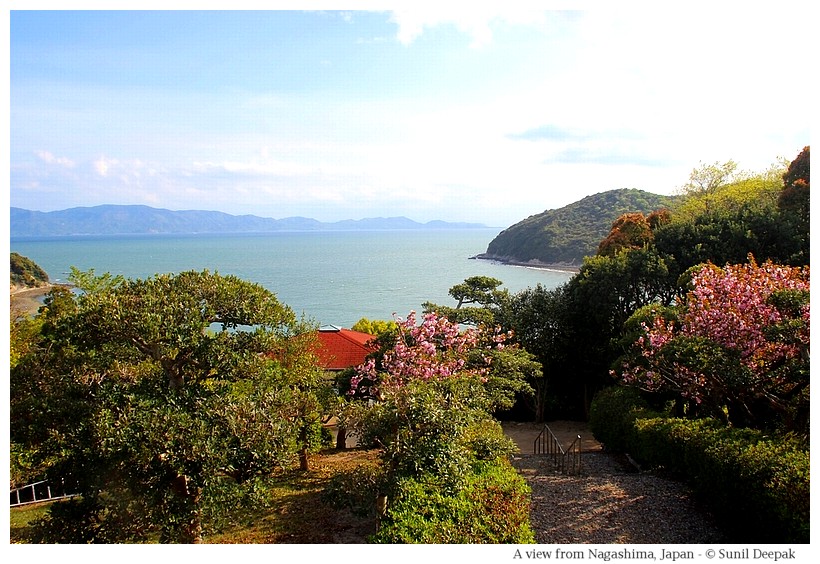 The image below shows Tekake-Jima, also known as Benten island, which is connected to Nagashima during low tide and has the Nagashima shrine at its top. 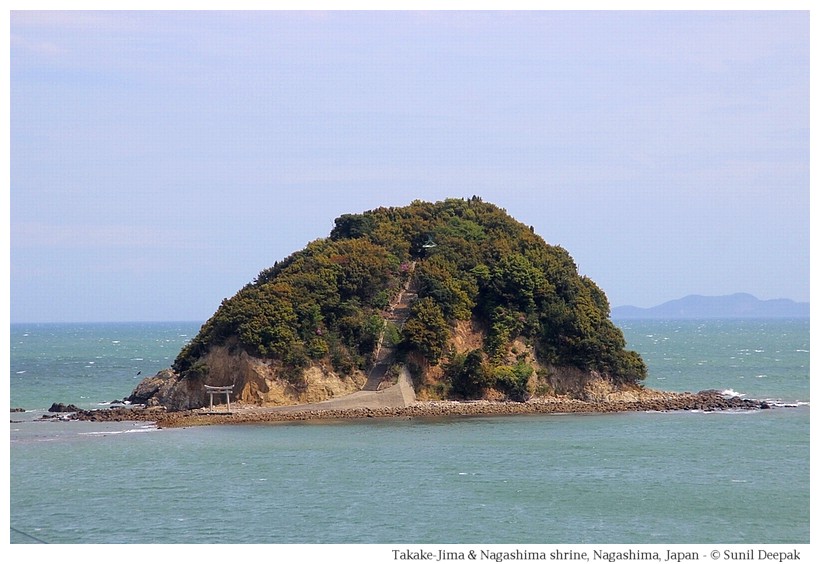 Nagashima has two museums - one is located in the old main office building at Aiseien. It is a beautiful building covered with green creepers. 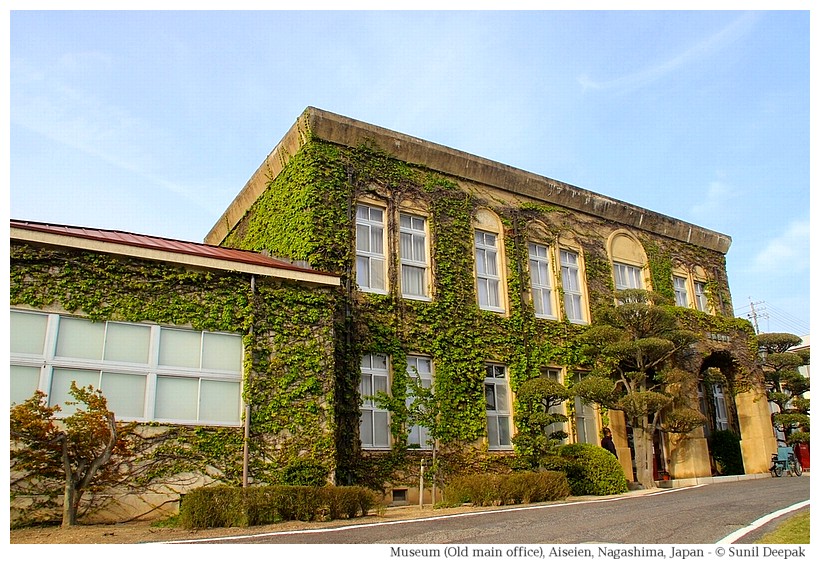 The other museum is a new building in Oku Komyoen. The museums show artifacts, equipment, maps, medicines, etc. from the old days. For example, Nagashima had its own currency, so that if persons managed to escape they would not have any money to use on the mainland. 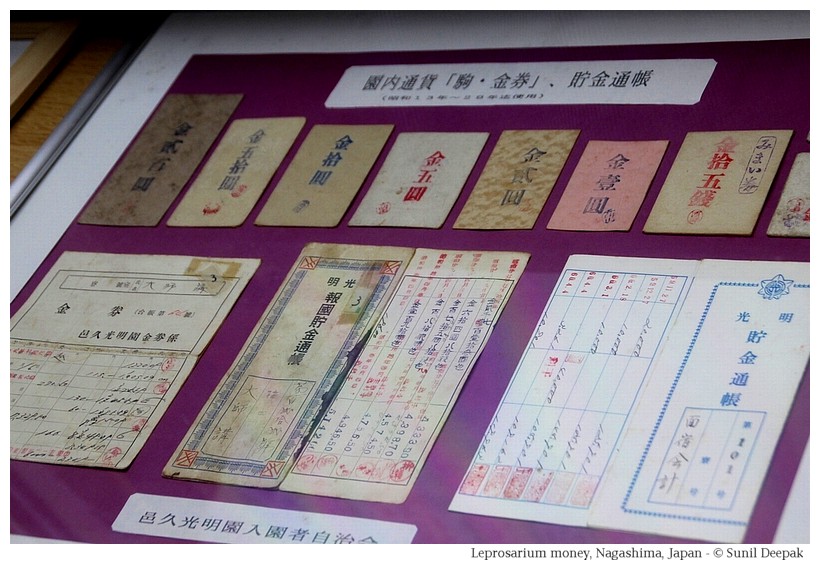 The next image shows part of a miniature sculpture of Nagashima with the isthmus of land connecting the old main office building to the area where the staff lived. In 1988, a canal was opened in this part of the island to facilitate the visits of the boats of the oyster farmers, who otherwise needed to go all around the island to reach their oyster platforms. 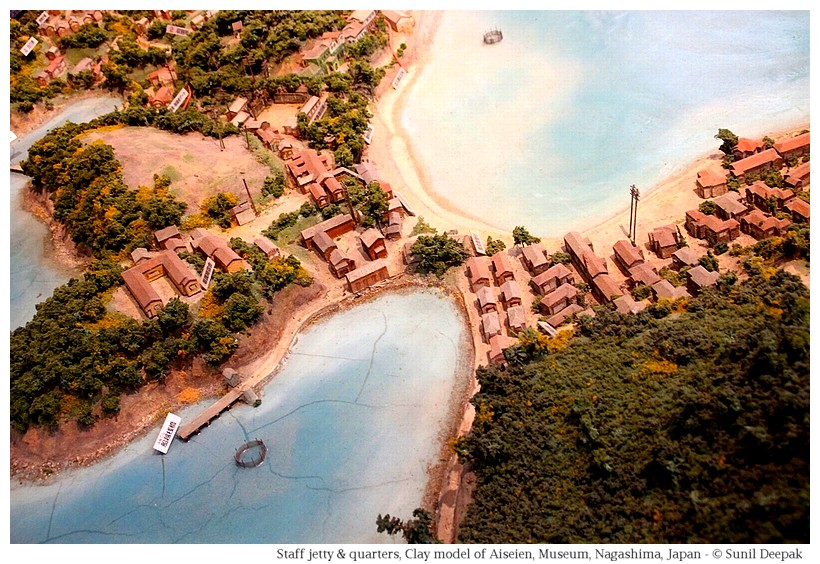 Both Aiseien and Komyoen have charnel houses for keeping the remains of people who died on Nagashima and whose remains were never claimed by their families. The image below shows the Charnel house of Aiseien. 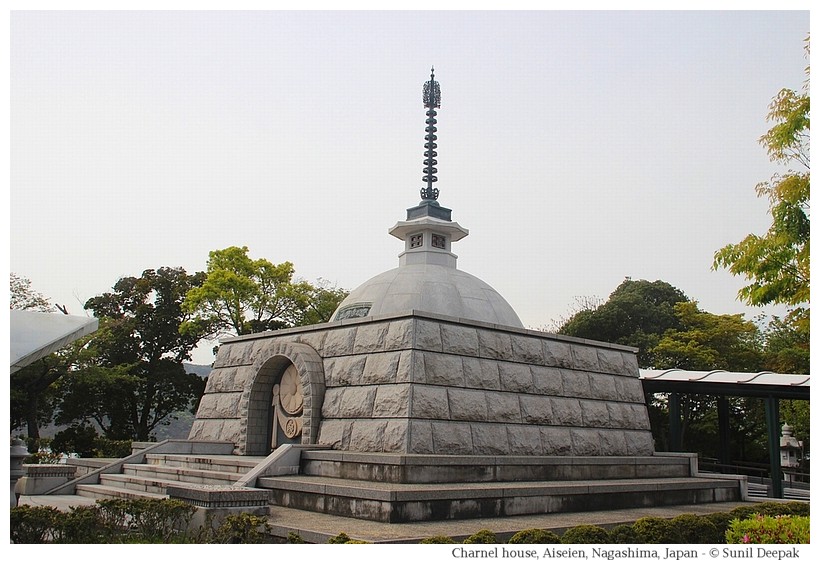 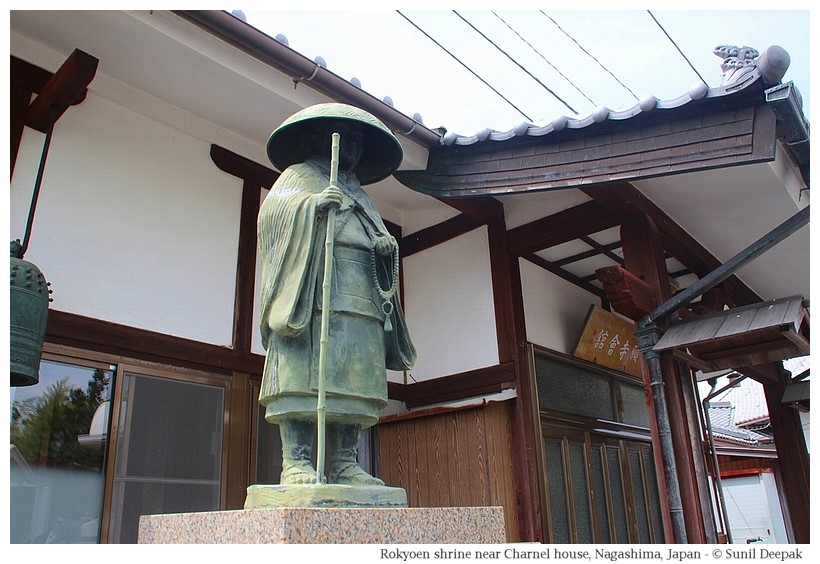 A crematorium was built in Nagashima, mid-way between Aiseien and Komyoen. This site also has a charnel house where remains of other residents are placed. It also includes a memorial to the children and fetuses of women living in Nagashima who were forced to abort (this policy was stopped only in 1954). 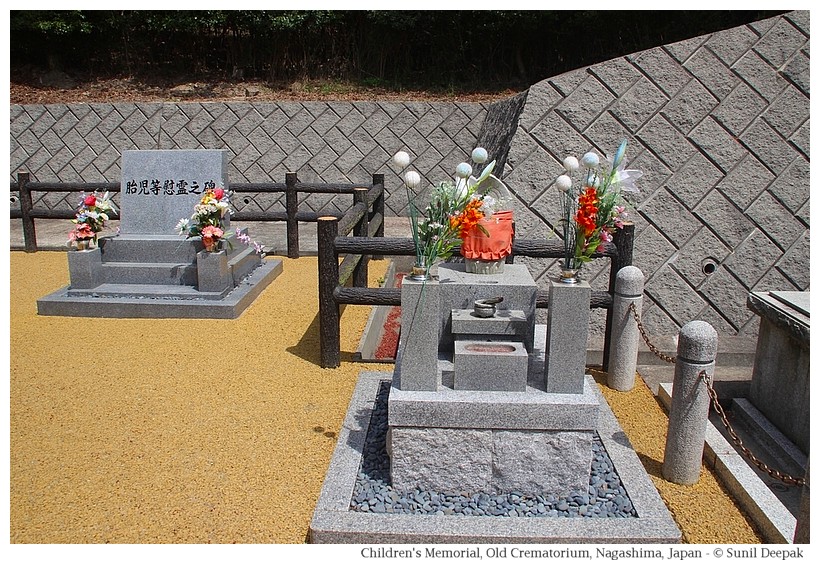 In 2002, in a meeting organised by IDEA and held in Seneca Falls in USA, I remember listening to very painful testimonies of some Japanese women who had been forced to abort in the leprosariums. Visiting this memorial brought back the memories of that visit and those testimonies.

Doctors managing Nagashima had complete powers over the residents including the power to punish and put them in jail. It was operational from 1939 to 1953. Below the hill, the warden of the jail had his paddy fields. Looking at the words scribbled by inmates of the jail on its walls was very moving. 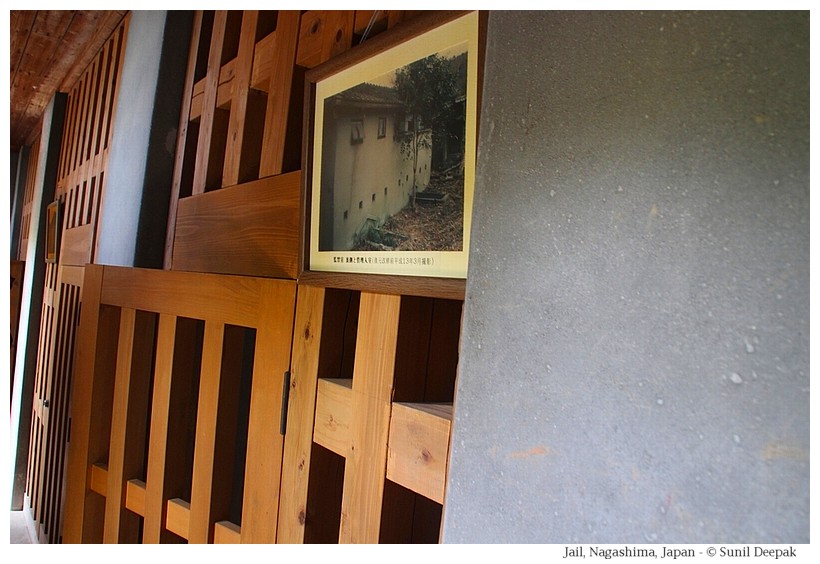 Persons arriving in Aiseien were taken to this building where all their belongings were checked and prohibited things were confiscated. Their children were taken away. Small children brought there with their parents were sent to schools both on Nagashima as well outside (where they were not well received). 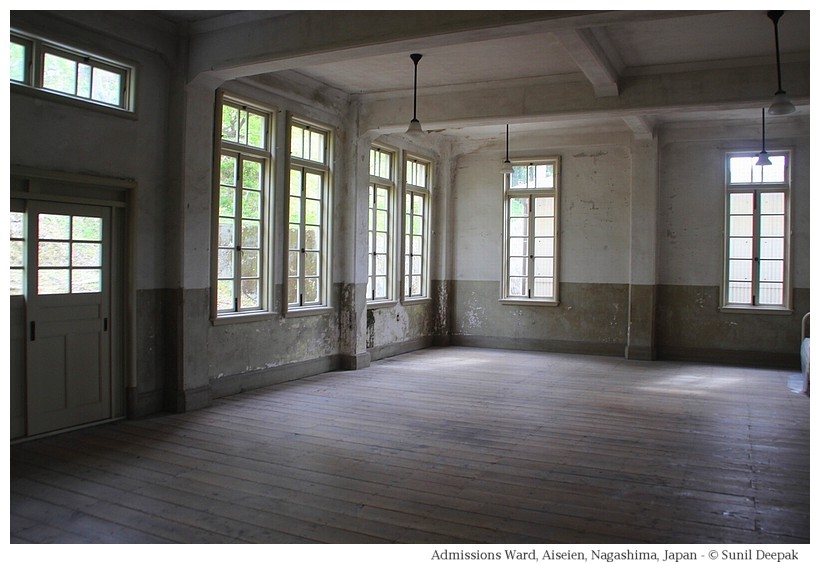 They were given a disinfectant bath with cresol. 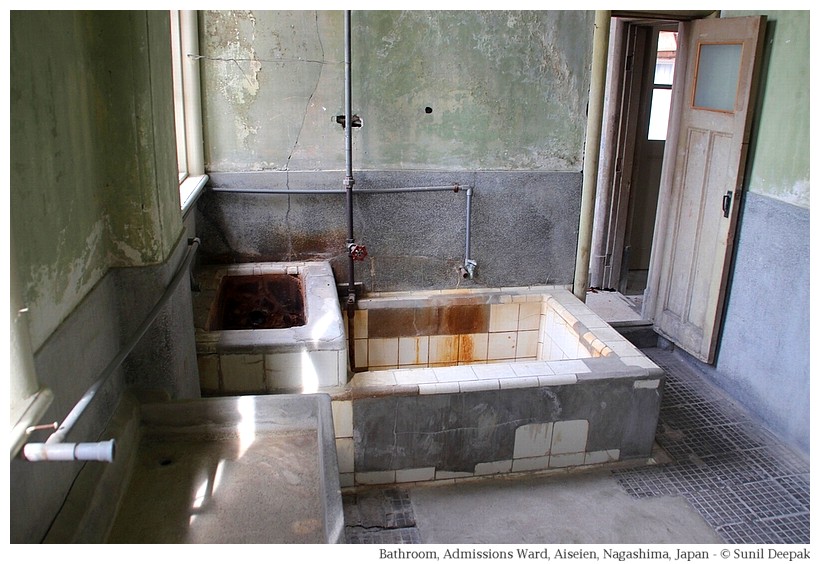 This part of the visit made me think of the Nazi concentration camps that I had read. Such places still continue to be used in countries, ostensibly for health-related reasons, for example with mentally ill persons and with immigrants.

Men and women living in Nagashima, if they got married, the men were sterilized but these operations were not always successful. Thus, if any women became pregnant, they were forced to abort. It was the Eugenic Protection Act enacted in 1948 that 'allowed' the parents with mental diseases and leprosy to have abortion legally. This act was amended in 1996, and it was only then that having or having had leprosy or mental diseases could be a condition to have an abortion.

Aiseien had two separate jetties, one near the old main office building, which was reserved for doctors and other staff. The other jetty at the back, closer to the admissions ward was reserved for the patients. Most families accompanying persons affected with leprosy were not allowed to get down and had to say goodbye there. 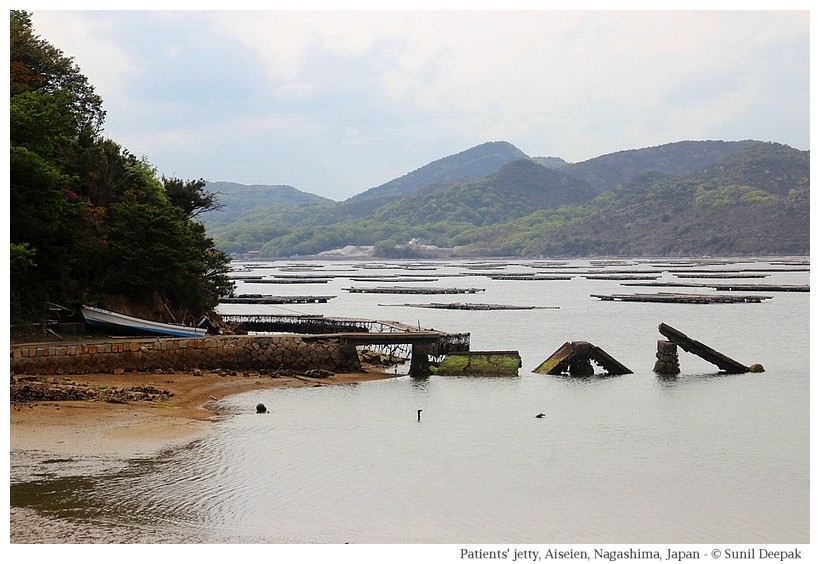 Some persons arriving in Nagashima knew that they will never see their families again and they will not have an opportunity to leave the island. Many persons, especially the young ones, arriving in Nagashima did not know they were there for life. Many were persuaded to come because they were promised free medication and free lodging, and after cure, going home. They only knew that they were there for good when they got there, asked to change their name, and signed the autopsy agreement.

Looking at the old jetty with its broken down stones, and thinking of the desperation of those persons was one of the most touching moments during this visit.

Nagashima gave an impression of detached, clinical efficiency of dealing with people who had leprosy. It was a closed world with its own houses, schools, orchestra, sports groups, associations, jail and crematorium.

In 1998, some residents of Japanese leprosy sanatoriums went to the district courts to claim that segregating persons on the island was non-constitutional. Not all residents were happy with these law suits and people who fought for this had to face hostilities. The courts agreed with their plea and the residents were awarded a compensation and the Prime Minister of Japan apologised to them on behalf of the nation.

Leprosy had been in Japan for many centuries. First records of the disease are from 8th century. People affected with the disease had faced prejudices and stigma and were forced to live in leprosy villages. However, during all those centuries, the harsh measures adopted in 1930 such as complete isolation in an island, lack of contact with families, forced abortions, etc. had not happened. Why did they happen in the 20th century?

Visiting Nagashima was an opportunity to reflect on the use of medical systems to take away the dignity of people and even to torture them. It has happened in other countries and it still happens in many parts of the world.

Let me conclude with a question for the readers - what is the use of keeping alive the memory of places like Nagashima Aiseien and Komyoen? Can our young generations learn anything from such places? 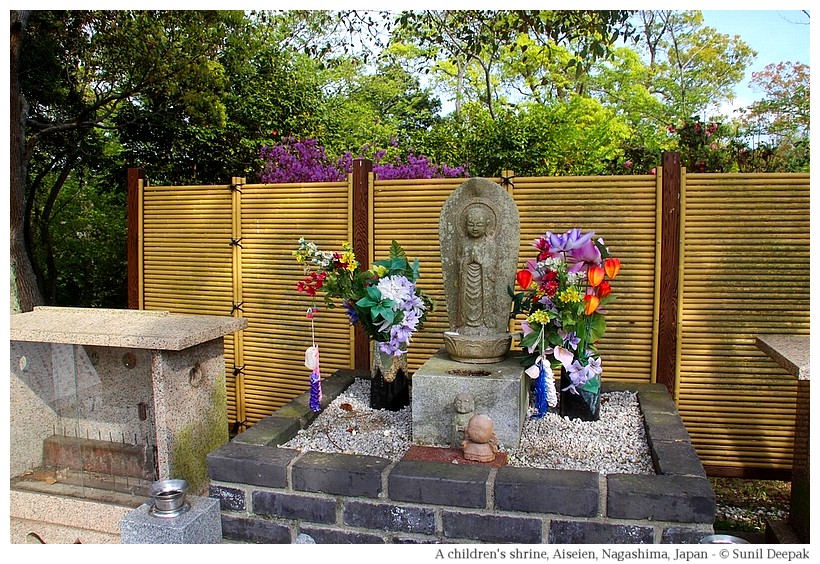 In spite of the pain and suffering that are easy to imagine when one visits a place like Nagashima, my memories of this visit are also about the sheer beauty of Nagashima and the cheerfulness of the former residents and doctors, who welcomed us, showed us around and shared its history with us.