A Theater and Photography workshop

I love both theater and photography. Thus, when I heard about the workshop on "Theater and Photography", I immediately knew that I wanted to join it. It was a perfect opportunity to meet actors and to reflect with them on the significance of theater and to understand the role of photography in it. 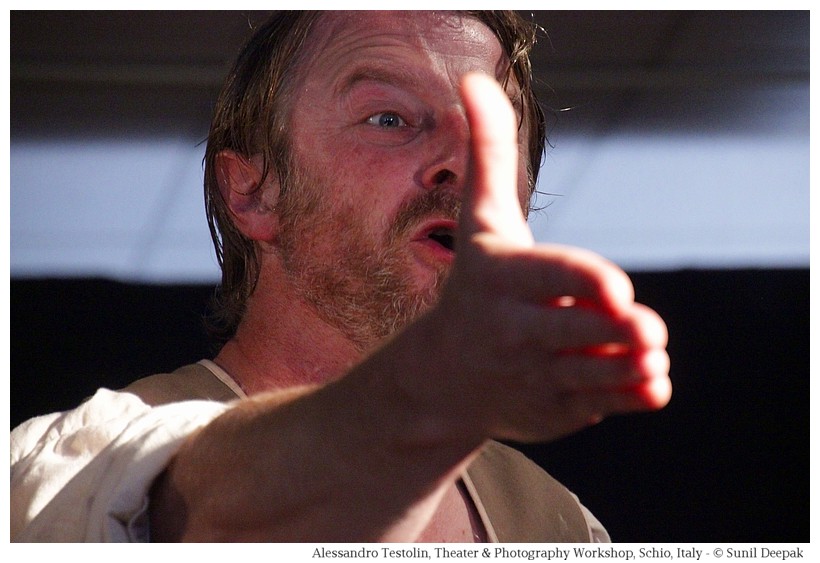 The workshop was an idea of Roberto Rizzotto, a noted photographer and cultural personality of Schio (VI) in the north-east of Italy. We didn't have any discussions about technical aspects of photography. Instead, our discussions focused on what Roberto calls the "Anthropology of Photography", which meant that photography is not just about getting a good picture, rather it is a pathway for a deeper understanding of theater, culture and ultimately human nature.

The workshop was organised in collaboration with a local theater group of Schio (VI) called "Schio Teatro 80". Started in 1980, it is one of the oldest non-professional theater institutions in Veneto region of Italy with around 70 volunteer members. Since 1989, every year it organises a theater training course.

During the workshop we worked with three actors - Tanina Amato, Alessandro Testolin and Elena Righele, spending around 1.5 - 2 hrs with each actor. Each actor presented a short performance, which we watched as spectators without clicking any pictures, so as to absorb the different aspects of the recitation. 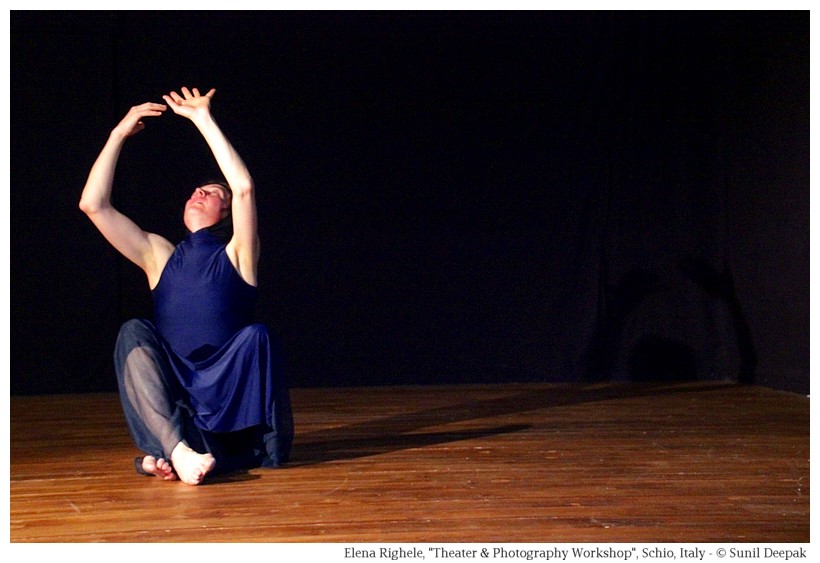 Tanina did a brief performance on women victims of violence called "The sense of honour". The scene was based in afterlife where she first appeared as Carmela, a Sicilian woman who was killed by her husband because she had a love affair. Her second role was of Amina, a woman of Tabriz in Iran, who had been killed by stoning. 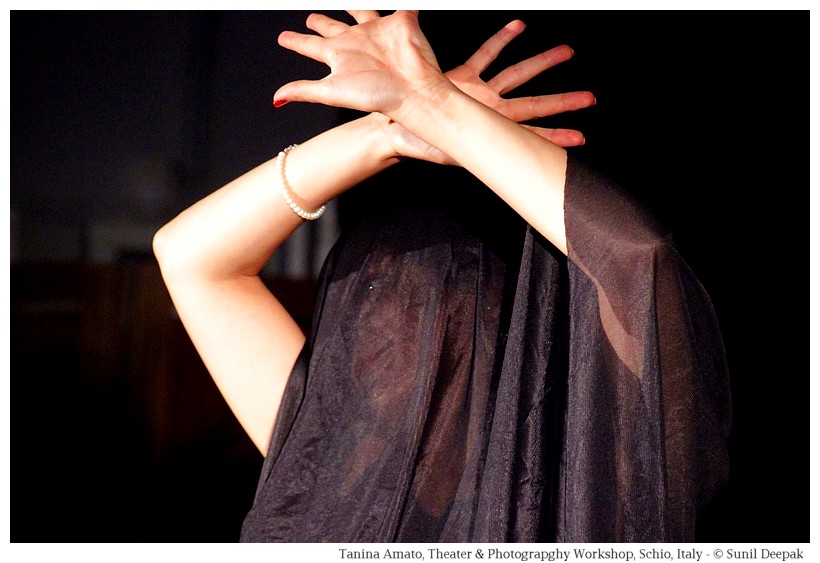 She had chosen a black dress with vivid red lipstick and bright eye makeup for this role. She started the performance by putting make-up on the stage and showed the transformation of the actor for the role. 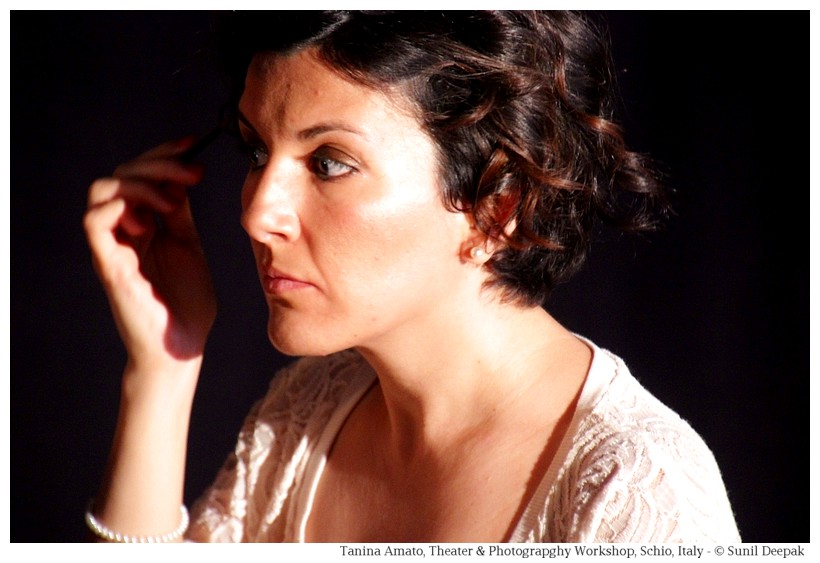 Among the photographers, two aspects of her performance created a strong impact. First, was her feisty, unrepentant and sharp-tongued representation of Carmela, who is aware of her body and her desires. The second was her use of the black veil to cover Amina, showing just her hands, to express her desire of freedom. 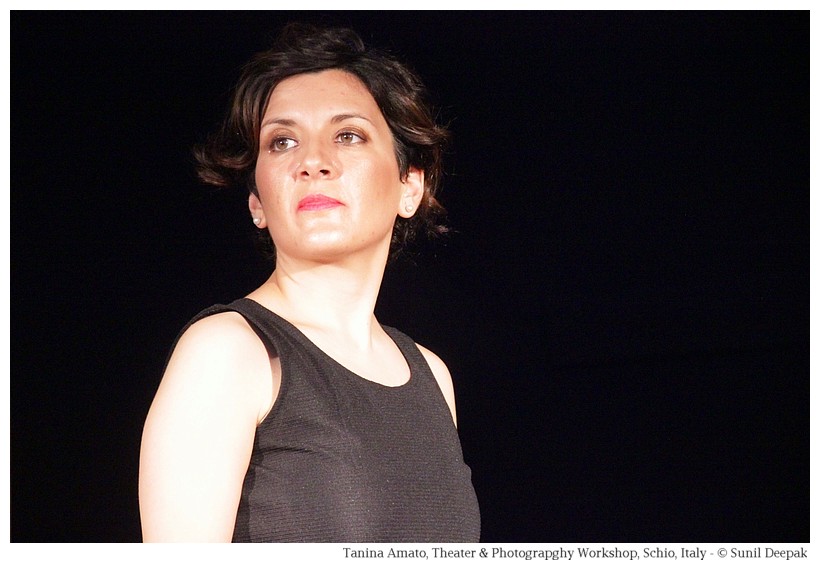 Alessandro started with the old Venetian tradition of "Commedia dell'arte" (Art comedy) from 15-17th century that included the use of the mask for a theater based on satire. Using a red mask, he performed a provocative piece. 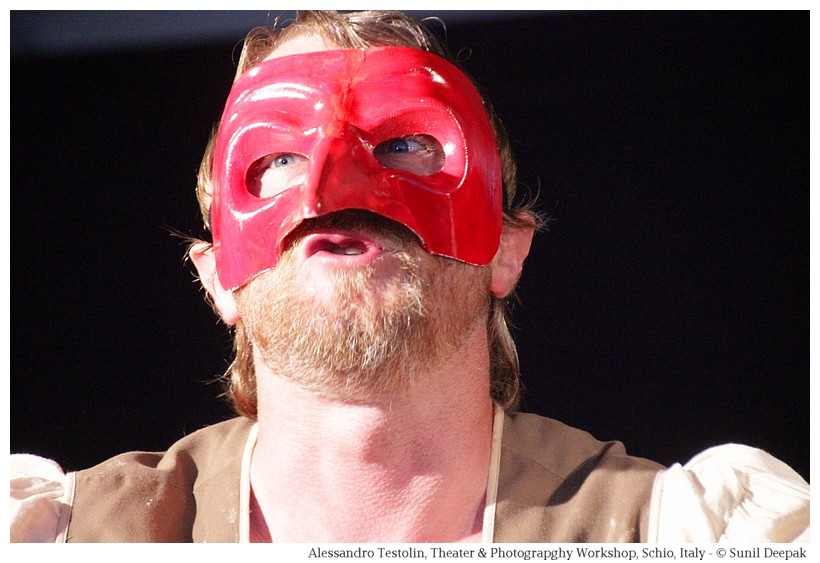 He also repeated the performance without a mask and shared his own unease about saying provocative things on the stage without the possibility of hiding behind a mask.

Then he did a short piece as Benedick from "Much ado about nothing" and finally concluded with a piece on Iago, the antagonist from William Shakespeare's play "Othello". 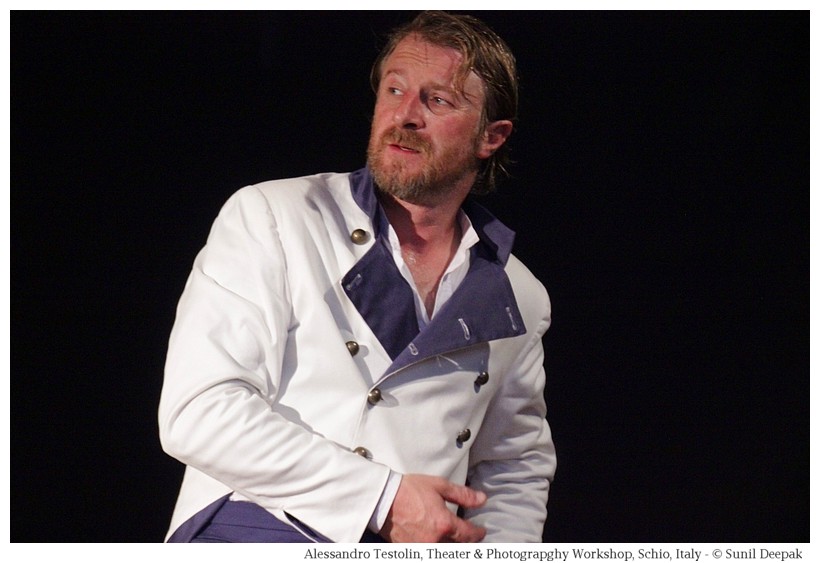 Elena first did an intense piece from Ingmar Bergman's play "Wood Painting" about a woman who has been declared a witch and who is going to be burned at the stake. Before, her piece, she showed a scene from Bergman's film "The seventh seal" based on this play. 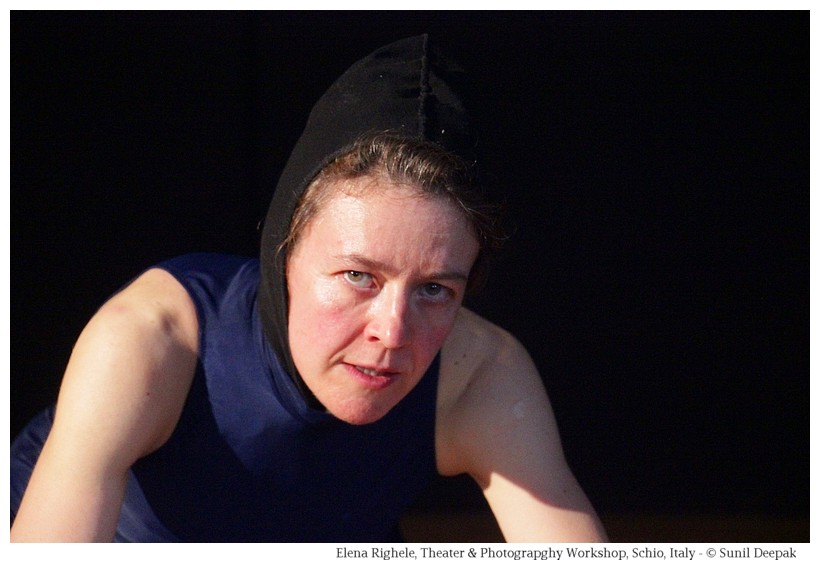 Her second piece was a more playful expression of emotions as depicted in a Pollock-like painting. She did the piece with a blank canvas. Each emotion was linked to a colour. Thus, by changing her facial expressions and her gestures she was painting that canvas with those colours. This performance concluded with the presentation of the painting she was expressing through her emotions. 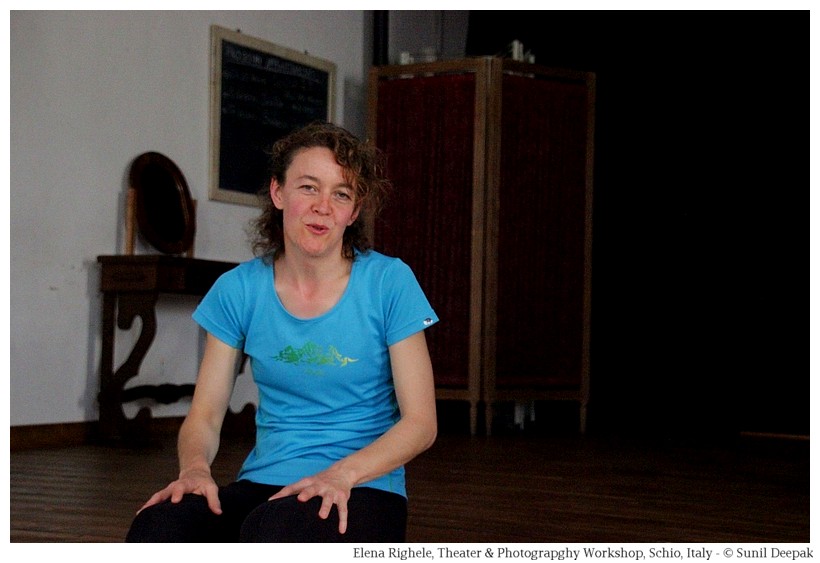 This explanation of her second performance was illuminating in making sense of her improvised dance around the canvas. I loved this performance.

The whole day was a marvelous full-immersion in art and culture, linking the art of theater to the art of photography. The time passed very quickly and at the end I felt enriched by a greater understanding of what it means to be an actor. For example, it was fascinating to hear a discussion about transformation of theater in Italy from Comedy art to the plays by Goldoni and then by Pirandello.

Something that Elena said, resonated deeply with me. She said that in theater, mind, body and heart. all the three are needed. Mind because the actor needs to remember and think. Body because, actor must express through the body. And heart because, without the heart, there is no performance. At the same time, an actor must make sure that heart must not become too deeply involved - because it is a performance, it must have an end and the actor has to retain his/her sanity. I think that this mind-body-heart thing applies also to photography as well as to many other things in life.

The workshop made me think about the shadow of the actor on the stage. Normally, I prefer close-ups during a performance and to catch the different emotions they are expressing. The image below has Tanina with her shadow as she threw up the black cloth she was using as a veil. 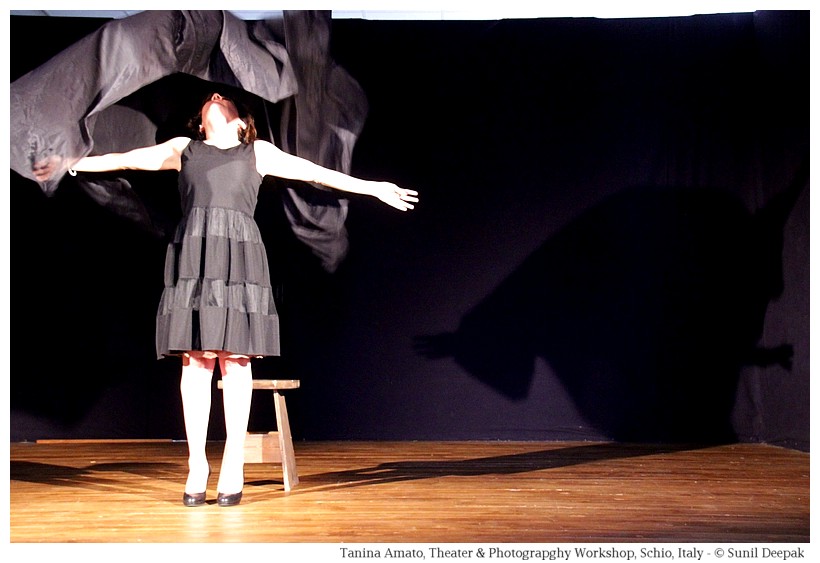 Not all the persons participating in the workshop seemed to share this idea of photography.

I want to conclude this post by thanking Roberto, Schio Teatro 80 and the three actors - Tanina, Alessandro and Elena for their performances and their easy acceptance of our numerous demands and questions during the workshop. 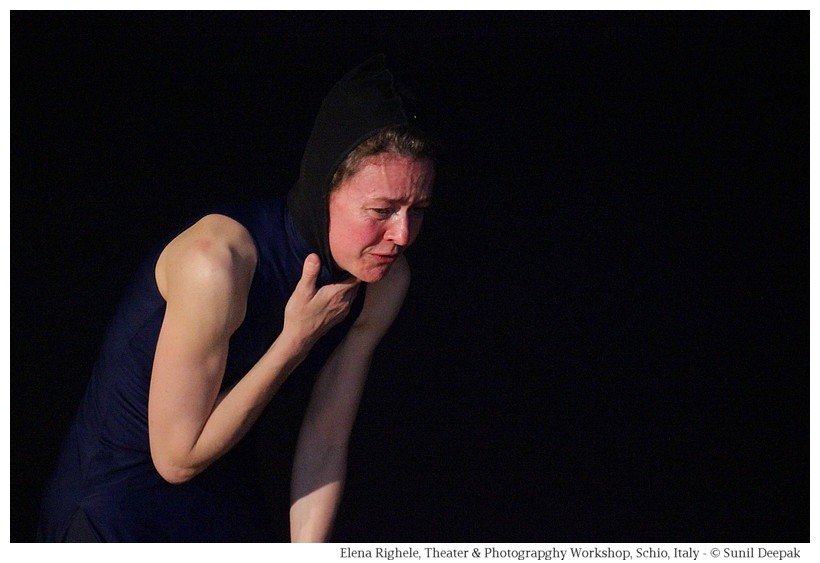 The last image is of Elena Righele, who was absolutely wonderful in the part where she expressed the colours through her emotions.