Looking for science in Renaissance period art in Bologna

How did the science influence the art in the renaissance period? To answer this question, let me take you to an old church in the medieval part of Bologna (Italy). It has some beautiful paintings like the one in the image below which shows the details of the Bentivoglio family portrait. 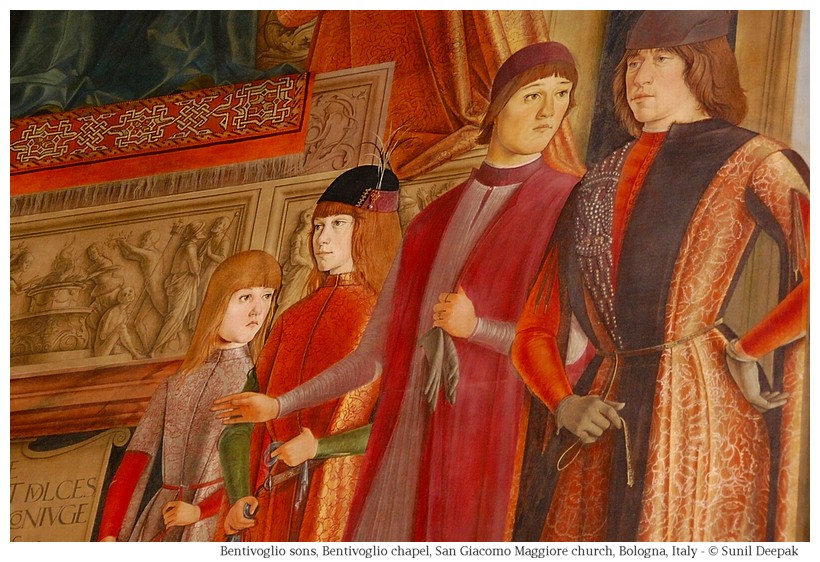 Via Zamboni is a historical road of Bologna leading from the twin-towers in the city centre to the San Donato gate. Along this road is an old church with some paintings that illustrate the influence of scientific discoveries on the art in the 16th century Italy.

Via Zamboni also leads to the Jewish Ghetto of medieval Bologna. The road going to the ghetto is predictably called Via dell'Inferno (the Hell road) illustrating the feelings of the medieval Catholic church towards the Jews.

Verdi Square is the area of university students in Bologna, located on Via Zamboni and facing the Municipal Theatre from 18th century. It is known for its noisy night life, open air caffes and cultural events. The image below showing Verdi Square and San Giacomo church is unusual since it seems deserted. This was because it was clicked during a snow storm. Normally this place is full of students. 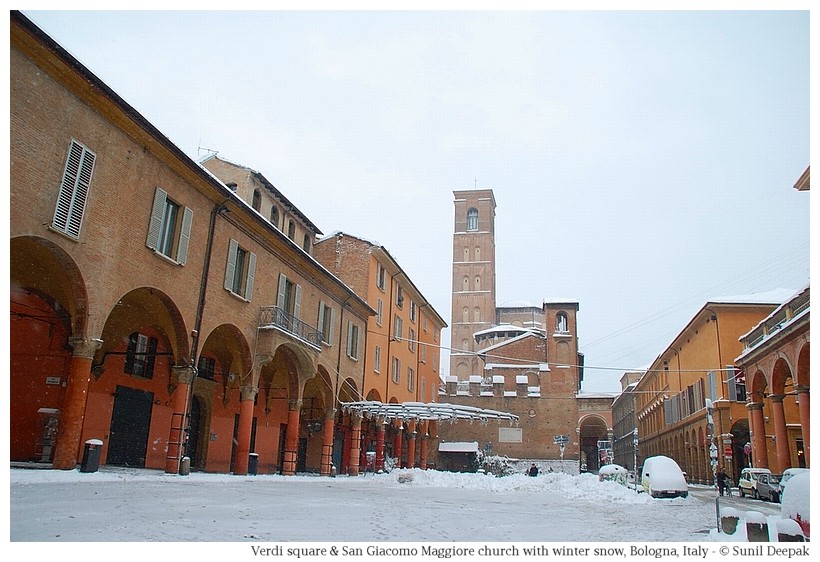 San Giacomo is an old church next to the Verdi square. Built in Romanesque style, its construction was started in 1267. Its outer walls still carry signs of old frescoes. 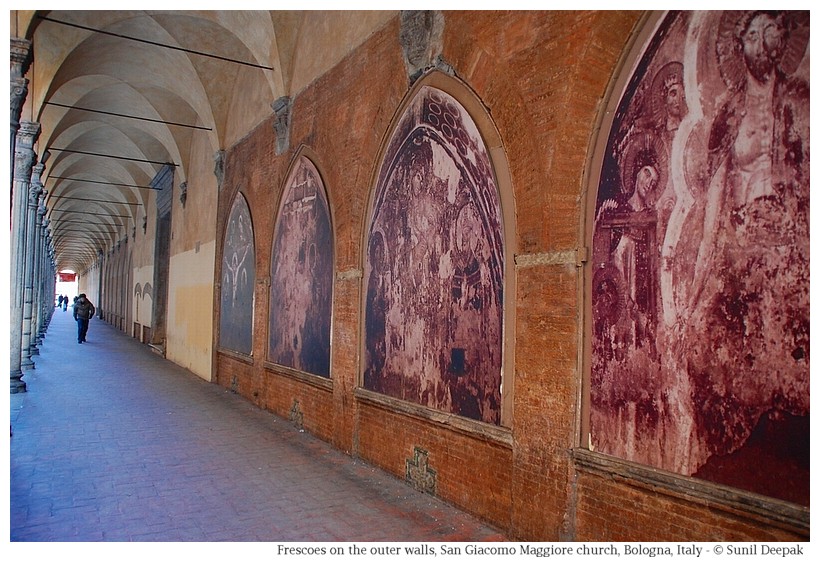 In 1463 century, the Bentivoglio family, who were the de facto rulers of Bologna and whose palace was just across from San Giacomo church, made their own personal family chapel in this church. Their family palace was destroyed by the angry Bologna people in 1507.

Around 1798 when Napoleon conquered Bologna, the Augustine friars living in San Giacomo were expelled. In the 19th century they came back but they could never get back their monastery where a music conservatory had been started. St. Cecilia chapel next door to San Giacomo in the old monastery is a small jewel with all its walls covered by colourful frescoes.

Science and Art in Renaissance Bologna

Today we look at arts and science as separate disciplines. However, in the renaissance period as people started looking at the world and at natural phenomenon in a rational way, there were no such distinctions. The same person could dabble in art as well be interested in astronomy or understanding of body functions. University students in Bologna studied both art and science subjects without distinction. The image below shows a group of university students of Bologna in a 16th century sculpture in San Giacomo church. Their tired or bored faces are not very different from those of modern students. 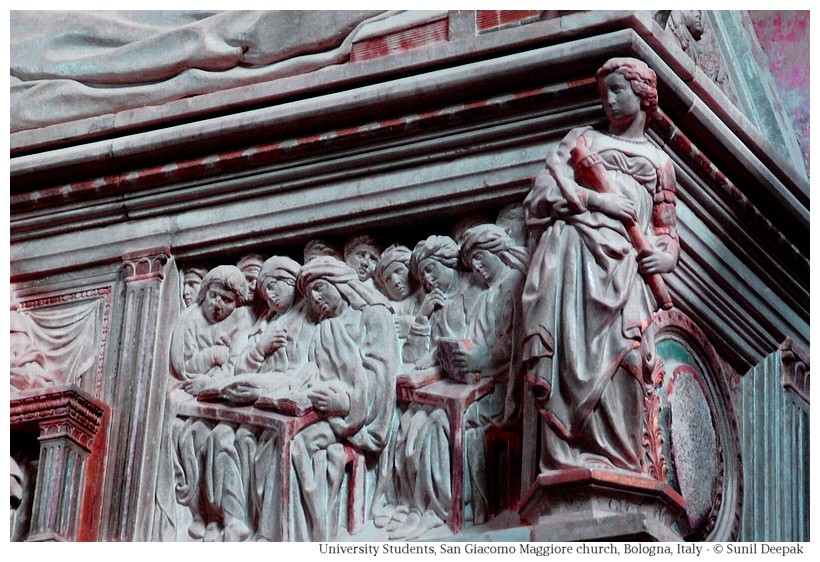 For example, a famous scientist, Ulisse Aldrovandi born in Bologna in 1522, set up an important botanical garden. He was also a professor of philosophy and later started the department of natural history. He is called the father of geology for his studies of earth formations, rocks and fossils. He coined the word "geology" in 1603. He also created a huge encyclopedia with illustrations of plants from different parts of the world. Thus, art and science were closely inter-linked in renaissance period.

The Changing Italian Art in 1500s


Around 1500 CE was the period of the early renaissance and Italy had a large number of great artists who were discovering a new way of making art. The artists included Michaelangelo, Leonardo da Vinci, Raffaello, Brunelleschi and many others. They introduced the concept of "prospect" in the art based on the understandings of geometry and mathematics.

Till then, the art had mainly been flat and two dimensional. Paintings showed people and events, but they did not have depth and proportions. The new ideas of "prospect" in the art, looked at things like the source and the angle of light. They analysed shadows and looked at the hidden geometric forms in the nature. They also looked at the proportions and the distances and introduced the idea of depth in the paintings. Thus paintings became more realistic.

On the left wall of the Bentivoglio chapel in San Giacomo church, there are two paintings by Lorenzo Costa, on the themes of death and fame (details of the painting on death are shown in the image below). The different kinds of rocks, hills and mountains shown in these two paintings, are specific rocks and hills around Bologna, painted in such a precise way that the places can be identified even today. This was the influence of the discussions and discoveries related to geology in that period. 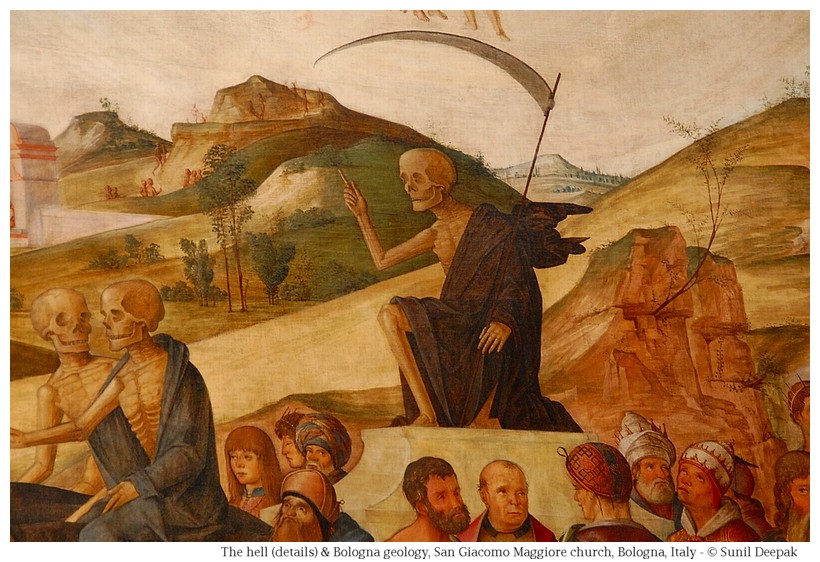 Thus artists started looking critically at the geography of the places, the structures of biological life and inanimate objects. This changed the way paintings were made.

The study of Geology was important not just for the artists, it also had other practical implications including the search for new metals and minerals useful for treating illnesses. It also had links with more esoteric ideas such as the alchemy.

In Italy, people had found fossils of marine life and objects like the sea shells, while digging in the hills and mountains. They couldn't understand how these things had come to these places, so far away from the sea or rivers. The most accepted theory in Europe to explain such finds was through the ideas of universal floods during Noah's times as described in the Bible.

Leonardo da Vinci was the first person to leave written documents of his opinions on this subject. His argument was that the shells and fossils of marine animals could not have come to the mountains with the flood described in Bible, as that would have left such objects on the surfaces of the hills and not buried them inside the rocks. His hypothesis was that some time in the past, those same hills and mountains were at bottom of the oceans. Unfortunately, Leonardo preferred writing in "reverse handwriting" and thus his diaries were not properly read and understood till more than 200 hundred years later.

Another example of Science in Art from San Giacomo

San Giacomo has a painting by Bartolomeo Passerotti. At the bottom of this painting, there are three objects - a sparrow on the left and on the right, there are a shark tooth and a piece of rock (the image below shows the Passerotti's painting). Unless you look carefully, you will miss these objects. 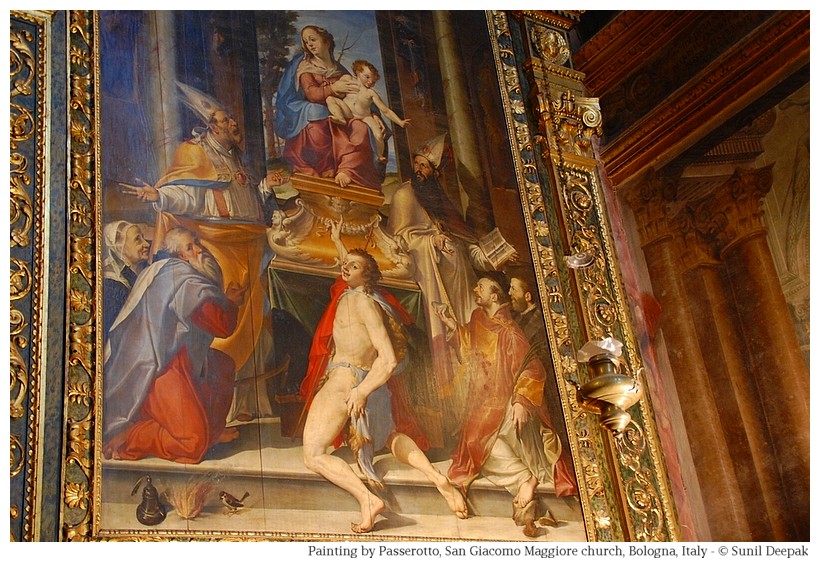 The sparrow is considered as the signature-sign of Passerotti (literally "Passerotto" means "sparrow"). The special thing about this sparrow is that it was painted in such a detailed and realistic way that it's species can be identified. It was a local species of sparrow that was very common in this part of Italy till about 300 years ago. Today it has been replaced by the more common hybrid or European sparrow. This showed the attention to real-life details in the paintings in this period.

The shark tooth near the foot-stone and the pebble on the bottom right of the painting, were both discovered in a hill near Bologna and are from the Aldrovandi's collection of natural history. The painter Passerotti was a friend of Aldrovandi, and by placing that tooth and pebble in his painting, he acknowledged his friend's work about the theories of natural history and geology.

Apart from the Lorenzo Costa painting mentioned above, the Bentivoglio family chapel in San Giacomo is full of beautiful paintings. On the right wall, the chapel has a beautiful Bentivoglio family portrait of Giovanni the second, with his wife Ginevra and their eleven children. The whole family is standing around a sitting Madonna with baby Jesus. 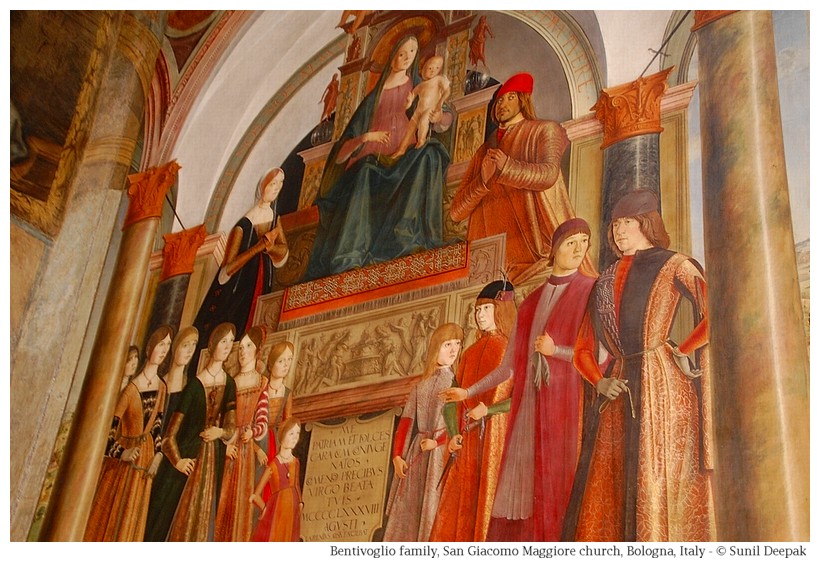 In the centre of the chapel, there is a beautiful altar-piece done by Francesco Raibolini.

San Donato church on Via Zamboni

Before concluding this post about influence of science in renaissance period Italy on art, let me tell you about another church on Via Zamboni.

This is the San Donato church. It is the said that old church in this place was burned down in 1210 CE. The present building was made in 1454 and was renovated in 1751 when the painter Francesco Orlandi painted its facade. It ceased to be an active church in 1805 and it now belongs to the Count Malvasia family.

The paintings done by Francesco Orlandi are in Trompe l'oeil (Deceive the eye) style. It is an art technique that uses realistic imagery to create the optical illusion that the depicted objects exist in three dimensions. For example, look at the window just above the church door - it seems as if it is actually surrounded by a niche, though it is all painted. 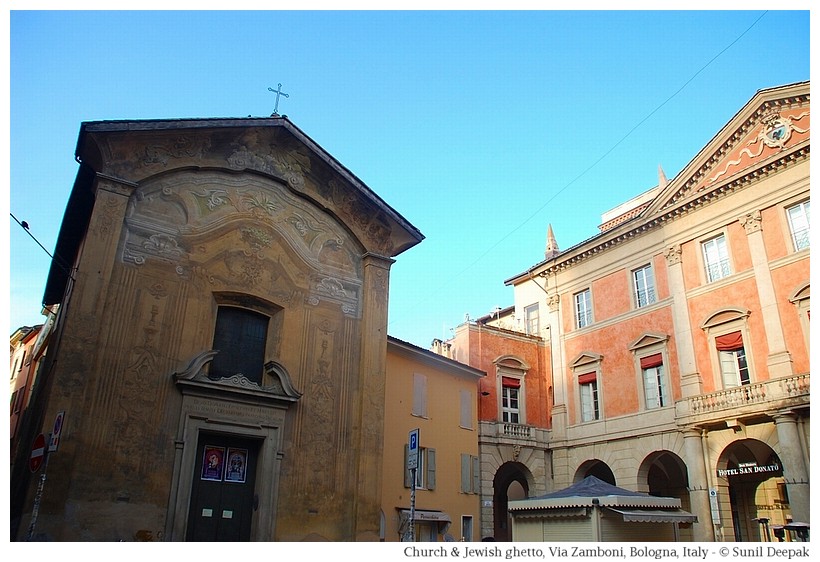 Art and science were not always seen as two parallel domains which never met. As this visit to San Giacomo church shows, these two worlds influenced and talked to each other. Art and artists played an important role in studying and understanding the physical world. The image below shows one of the striking sculptures from San Giacomo church. 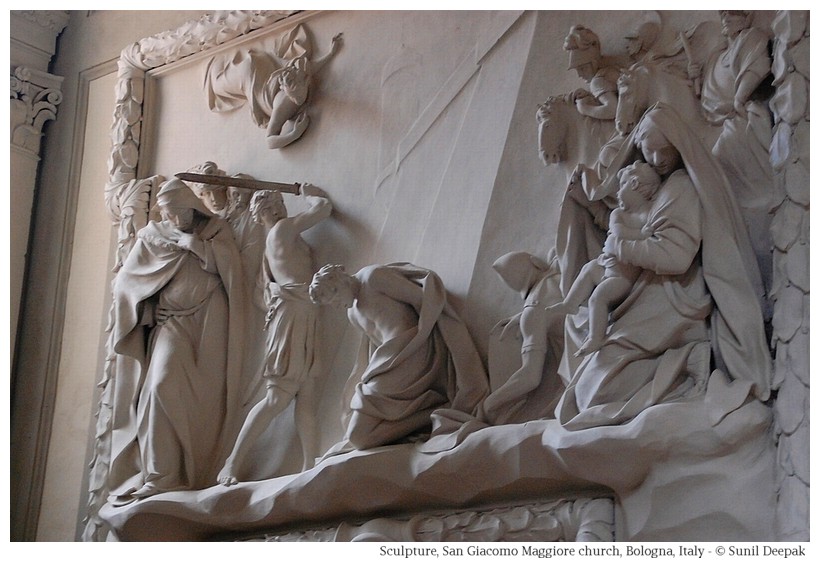 Most of the time when we visit museums and churches and look at paintings, we rarely stop to consider the specific elements and ask ourselves why did the painter put this particular element in this painting? As the visit to San Giacomo shows, this can sometimes provide with surprising answers.