Carnival of Venice is famous for its beautiful masks and costumes. The carnival celebrations last for about ten days starting with the procession of 12 most beautiful girls of Venice. This procession is known as the Festival of the Marias. 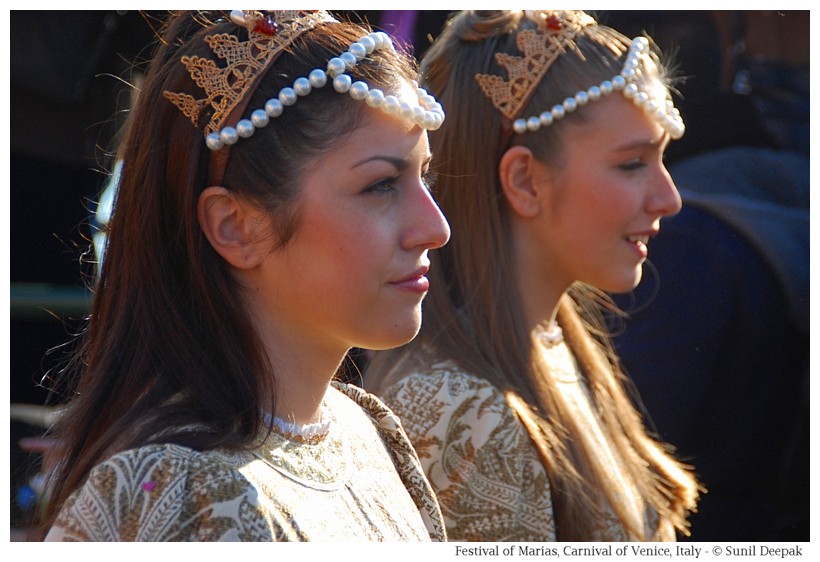 This post is about the Festival in which 12 beautiful Venetian girls  are dressed as princesses and one of them becomes the Queen of Venice and the angel in the "Flight of Angel" festival of the carnival.

A Brief History of the Festival of Marias
Around 9th century CE, the Republic of Venice had a tradition linked with the religious festival of “Purity of Maria” and was celebrated on 2nd February of each year. During this festival, 12 beautiful girls of Venice belonging to poor families were selected to be Marias. Each girl was provided beautiful clothes and jewellery by a rich Venetian family and helped to get married. 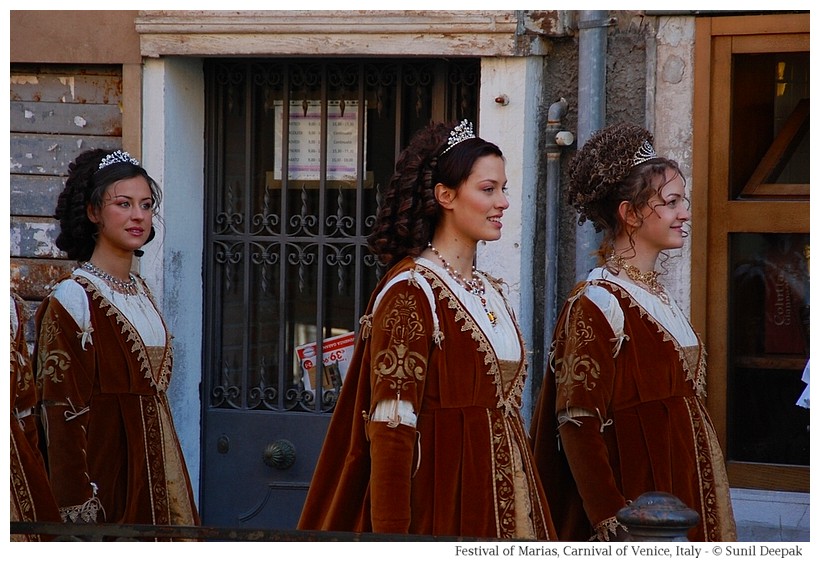 However, over centuries, the rich families were not very happy to give away their money. Even some poor families, when their girls were not selected as Marias, were also unhappy with this festival.

However, Venetians did not like the idea of wooden Marias and they started throwing rotten vegetables at them during the processions. Doge, the ruler of Venice, tried with a law prohibiting the throwing of rotten vegetables but it did not have much impact and slowly, the festival procession was stopped.

The selection process starts a long time before the carnival. Girls resident in the Venice province can take part in this process.

Procession of the Marias

The procession starts in the afternoon around 2.30 PM from San Pietro di Castello in Venice and culminates in San Marco square where the 12 Marias are officially presented to the people of Venice.

There are two groups of Marias in the procession – those of the previous year and those selected for the present year. They are accompanied by different groups of persons dressed in medieval costumes coming from Venice and neighbouring towns. 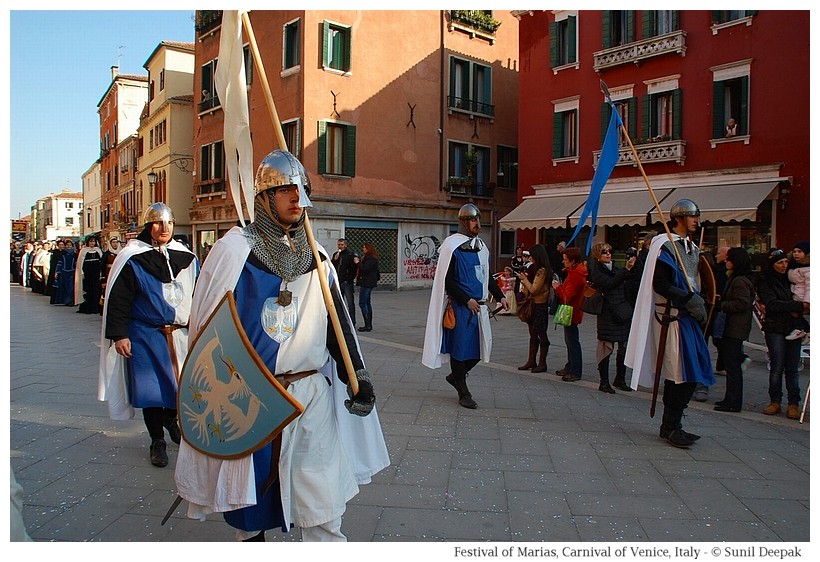 A big group of persons in the procession are those wearing medieval costumes of warriors and crusaders. 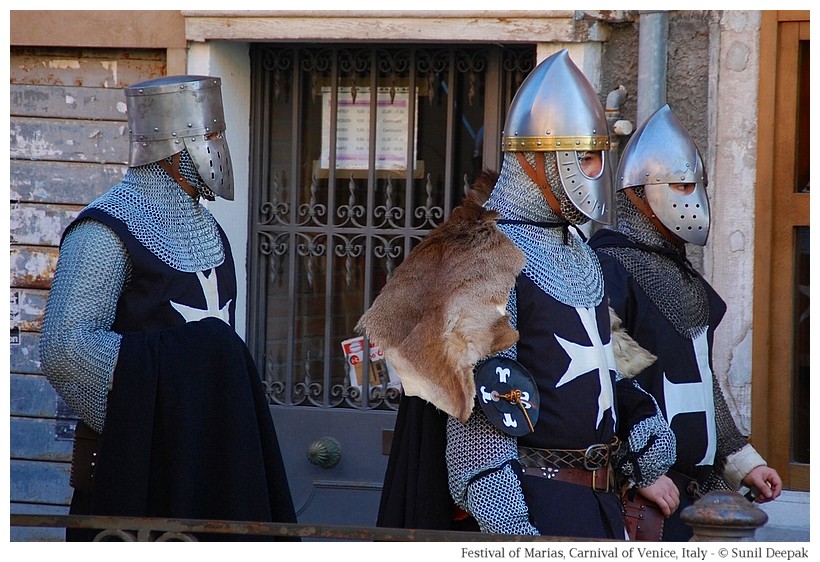 Another group is that of drummers dressed in medieval costumes. 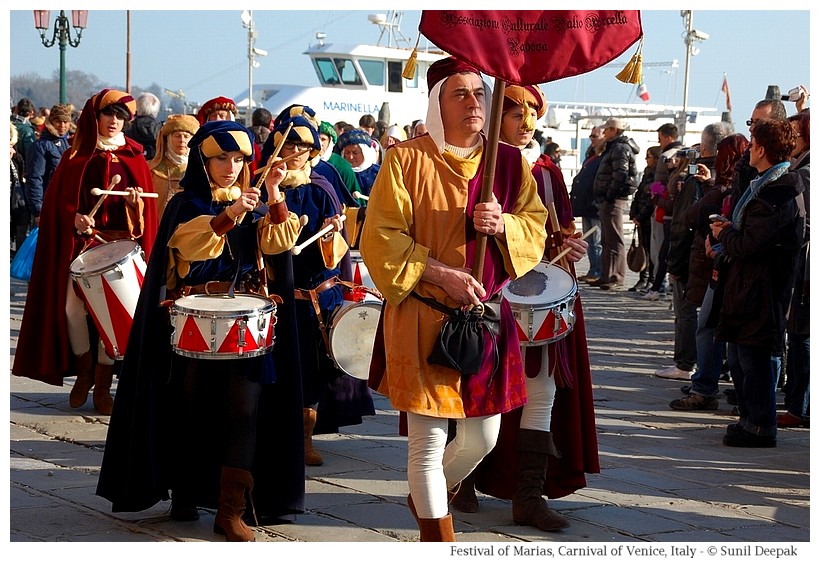 Another big group is that of persons dressed as noble families of Venice with richly embroidered and colourful dresses. 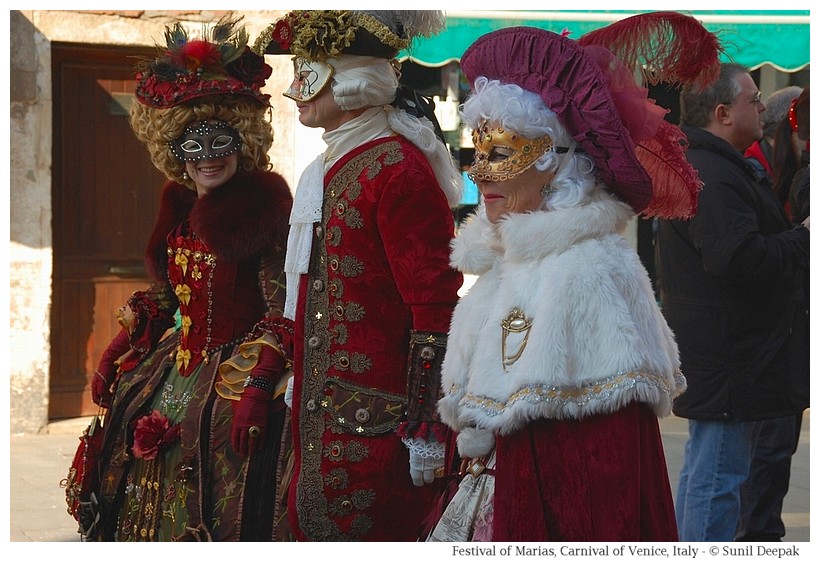 Then there are clowns, dancers, acrobats. 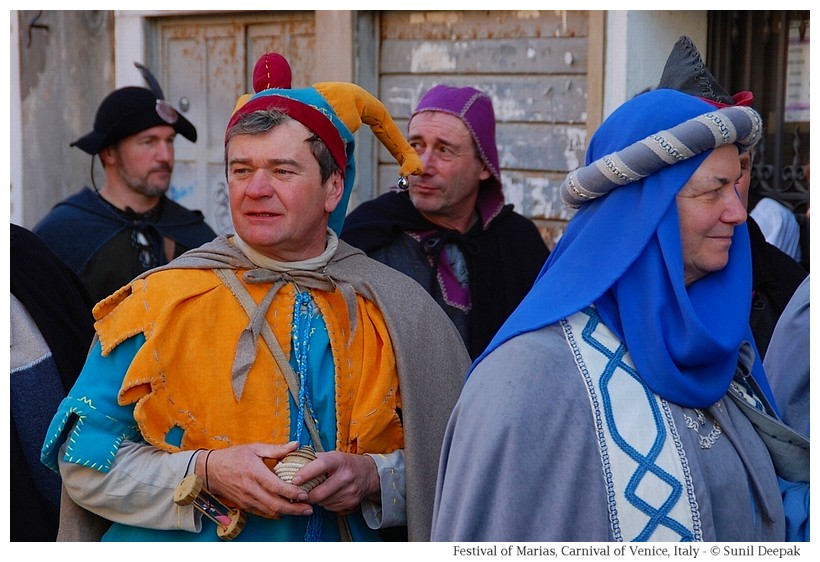 The 12 Marias from the past year wear dark brown richly embroidered costumes. For part of the procession, they are carried on palanquins by a group of Venetian men. 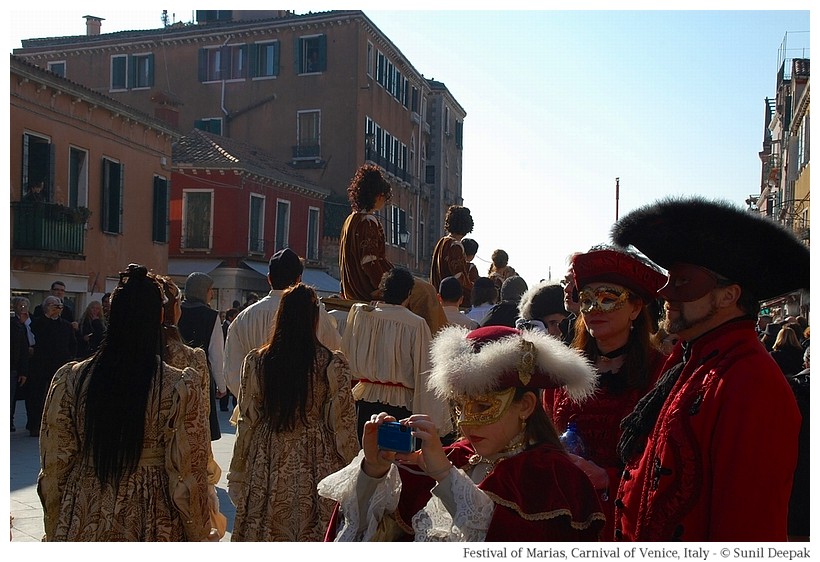 They are followed by the Marias selected for the current year wearing rich brocades. 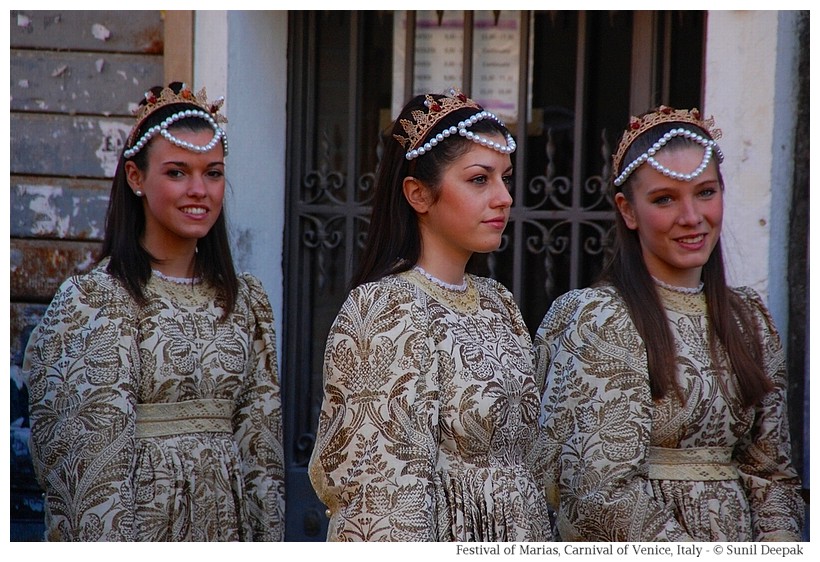 There are also the wooden Marias in the procession, though now they do not wear real costumes or jewellrey. 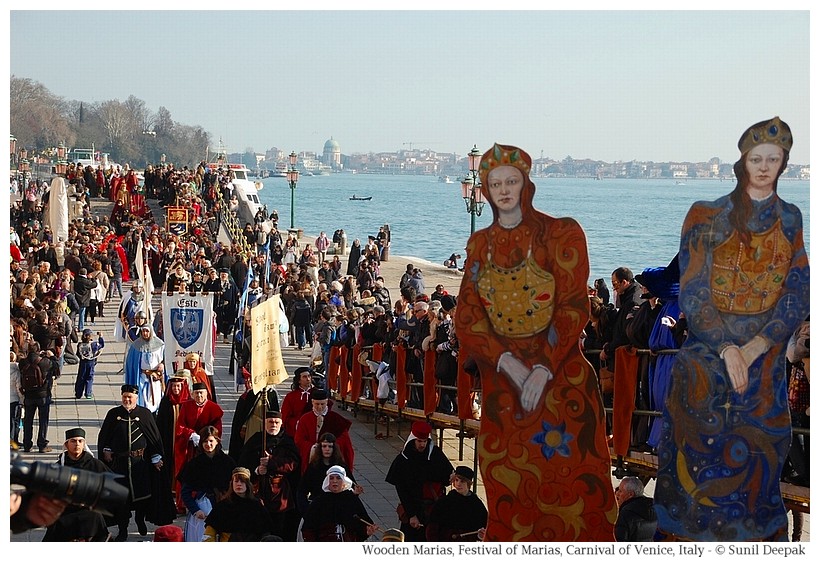 It is a beautiful procession and if you plan to visit the carnival of Venice, make sure to be there for the Festival of Marias.

After the Festival of Marias

On Monday, a day before Mardi Gras (last day of the carnival), among the 12 Marias, one girl is selected to be Ms Carnival or the Queen Maria for the next 12 months, a kind of Miss Venice. 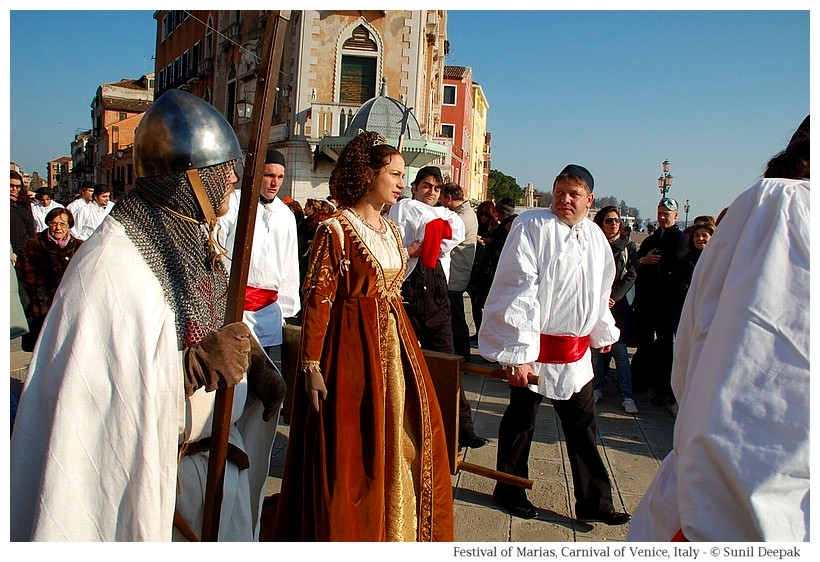 One year later, the Queen Maria will become the Angel for the “Flight of Angel” festival of the Venice Carnival, during which a girl descends from the bell tower in the San Marco square.

Venice is a unique city, unlike any other city in the world. During carnival, Venice becomes magical. Most people think that carnival means colourful costumes and masks on the weekend leading to Mardi Gras. However, Festival of Marias is a wonderful inauguration of the carnival celebrations. 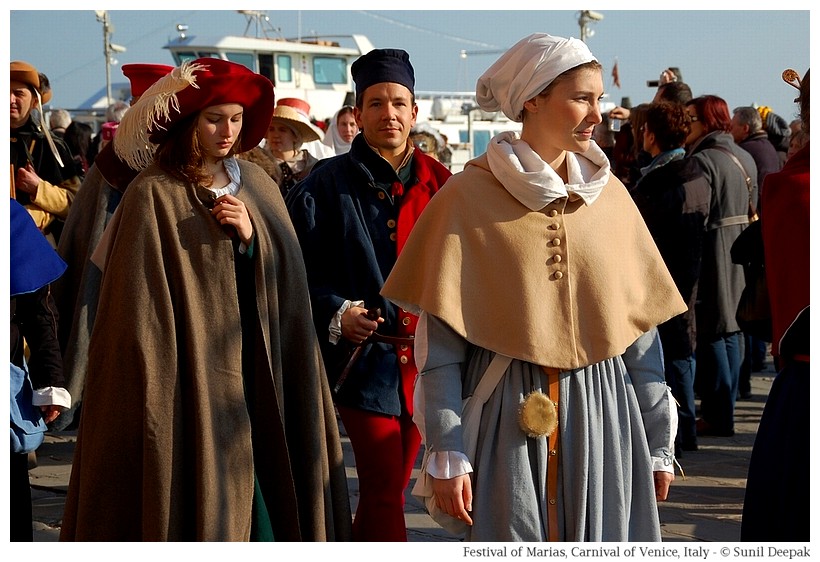 I love the Carnival Celebrations in Venice even if it is very crowded. The colurs, the joy and richness of costumes and masks, makes up for all the noise and confusion.