Old houses of Alberobello with black conical roofs that look like houses-with-hats, are an amazing spectacle. They represent an ancient tradition that has origins in pre-historical times. This post is about the magical Alberobello. 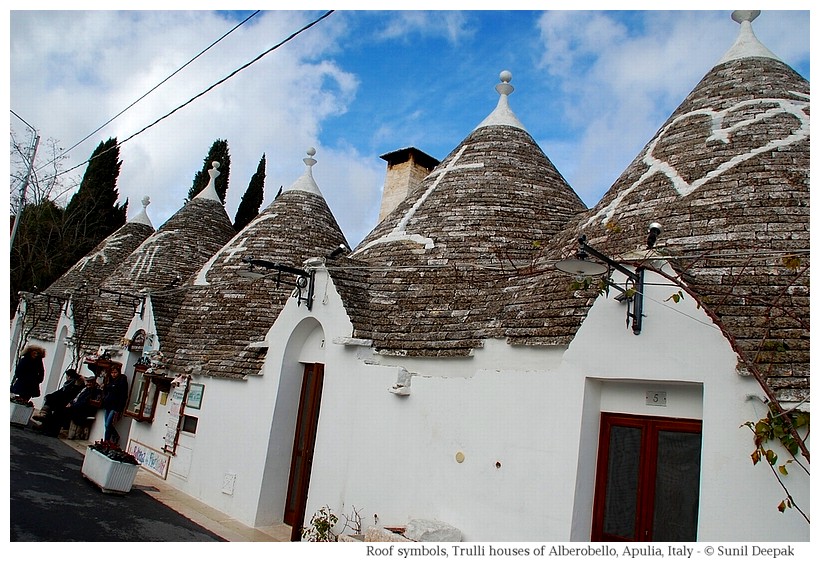 Alberobello (literally "Beautiful tree") is a tiny town in Apulia region of south Italy. Nearest national line train station is at Bari, 57 km away. From Bari, you can get a local train which takes you to Alberobello station in about 1.5 to 2 hours.

A 10-15 minutes walk from the railway station to Corso Trento e Trieste  and then towards Via Indipendenza-Largo Martellotta will take you to the old parts of the city characterized by the Trulli, the houses with black conical roofs.

A road sign on Via Indipendenza (image below) points to the stairs going up to a Belvedere terrace from where you can have an overview of the Trulli area. 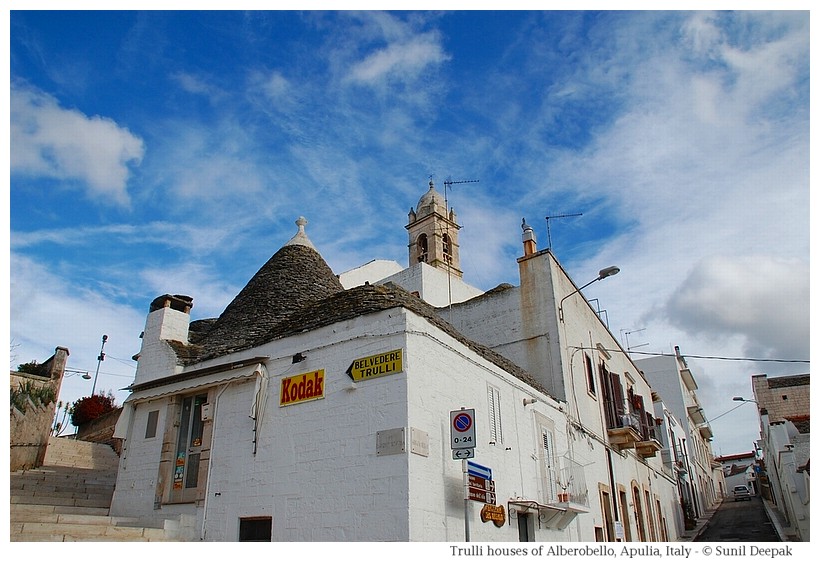 To see more Trulli houses, you can also visit the surrounding areas in the Itria valley such as Locorotondo and Cisternino. However, I think that the visual impact of these houses is seen best in Alberobello, where they are grouped together in one area. For example, the image below shows the Trulli houses in Cisterino. 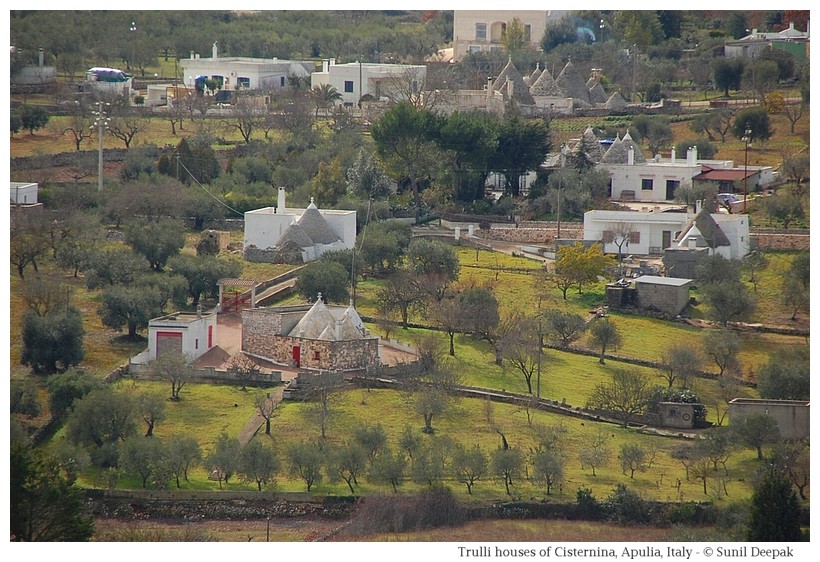 The Trulli are made of stones without using any mortar or binding cement in any part of the construction. This means that the builders need to select and cut the stones in a certain way and then fit them together so that they make a stable and water/wind-proof dwelling. 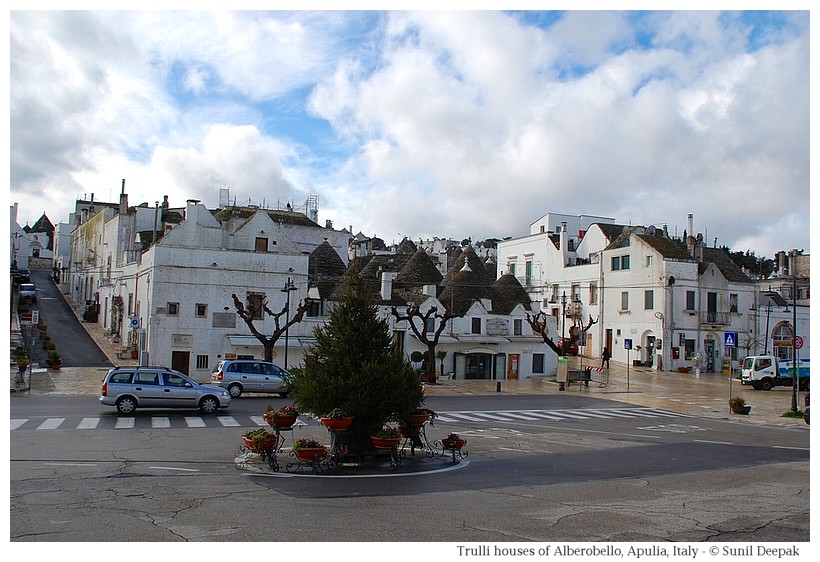 This kind of house constructions were started during the Bronze age around 1500 BCE. For example in the island of Sardinia there are prehistoric buildings called Nauraghe, made just with stones without any mud or mortar to bind them. The houses in Alberobello are around 500 years old.

Alberobello city came up in 16th century along the banks of Cana river. People were ordered to build their houses only with dry stones and without using any mortar. This was done to avoid paying taxes to the kingdom of Naples which ruled this area, as dry stone-houses were treated as temporary buildings.

Since this area was rich in limestone and Karst-stone, people started building trulli houses. The image below shows a couple of pictures from 1920, showing this area when it was densely inhabited. 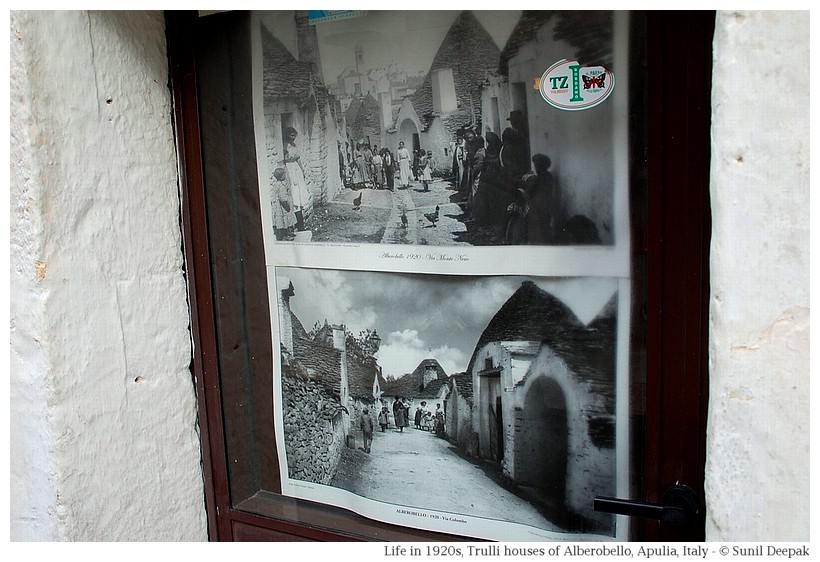 In the 20th century, when people had more money, they started demolishing the trulli houses to build modern cement-houses. About 200 trulli houses were thus demolished. Fortunately, during early 1990s, a new mayor of Alberobello stopped the demolitions and developed it as a tourist attraction.

Roads going up and down the gentle hills around Viale Margherita in Alberobello are lined with trulli houses. In many of them there are souvenir shops for the tourists where they sell traditional crafts of Apulia. 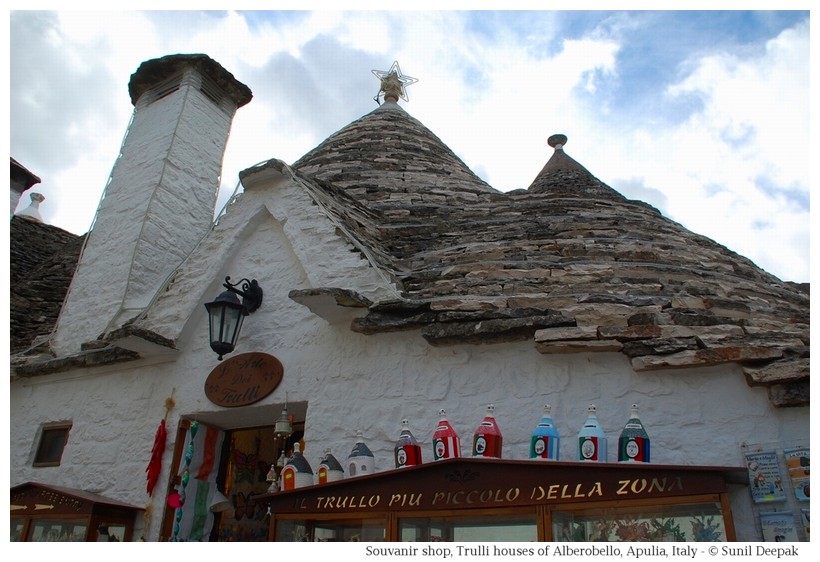 Many houses have the sign of cross or the zodiac signs painted on their roofs. 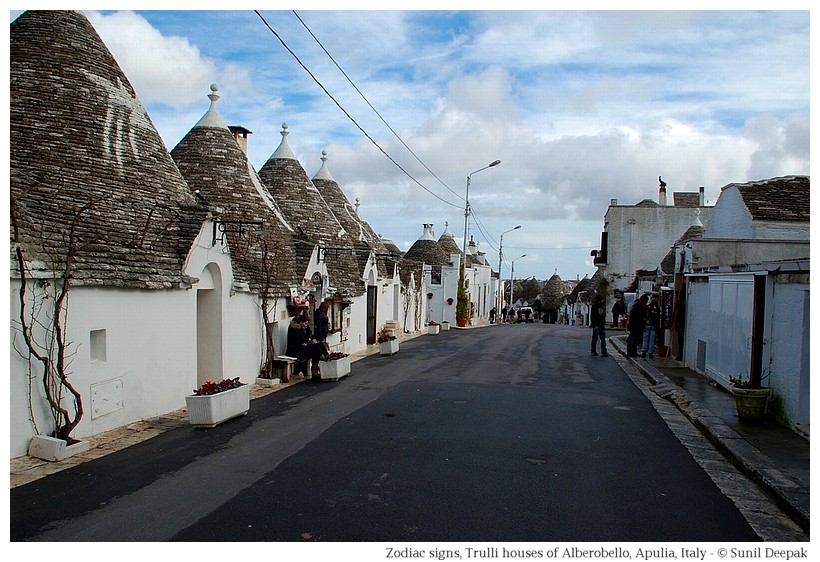 There are different models of trulli including single one room buildings as well as, huge interconnected structures with different rooms and roofs. 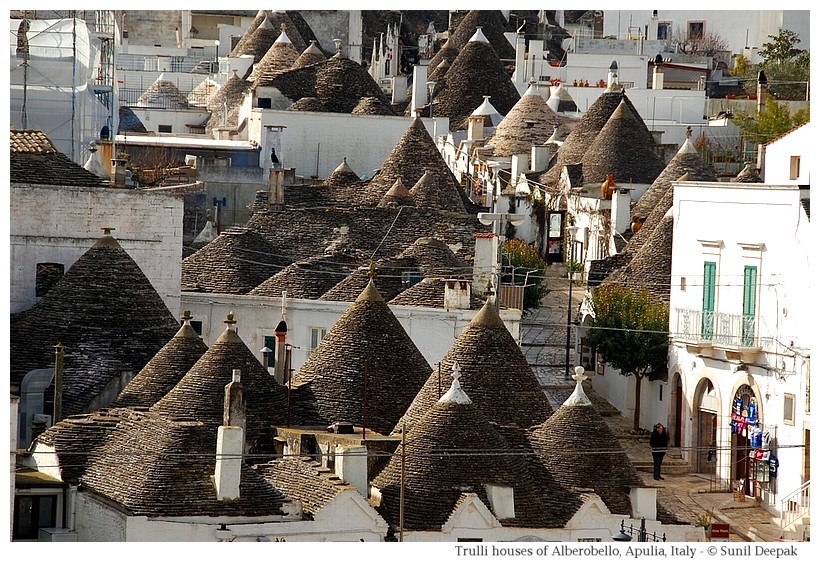 The way the roofs are designed also show many variations. 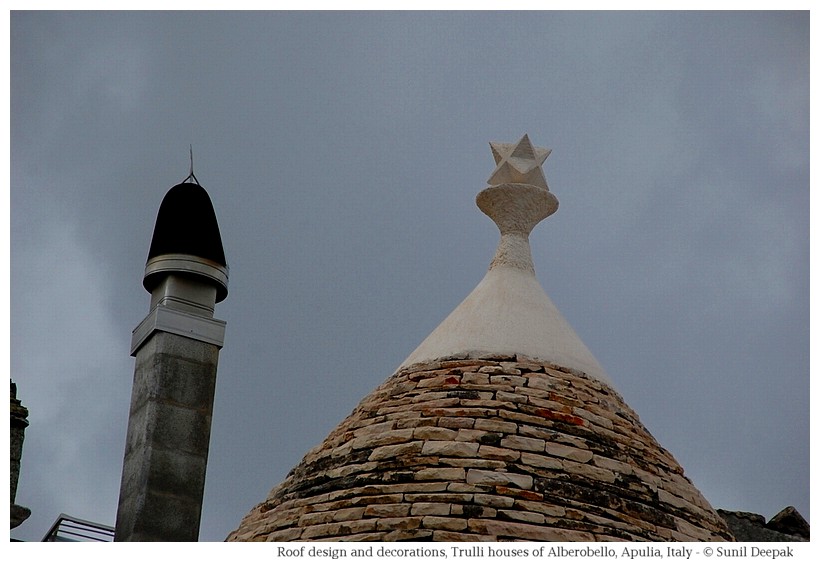 Many trulli houses are still inhabited. I met a person called Mr Sebastiano, who invited me inside his house to show it. He is retired and has grown up in the same house. As you can see in the image below, it is a simple but comfortable house from inside. It has a living room with a fireplace on one side and a tiny bedroom (separated by a curtain) a separate kitchen and a bathroom. 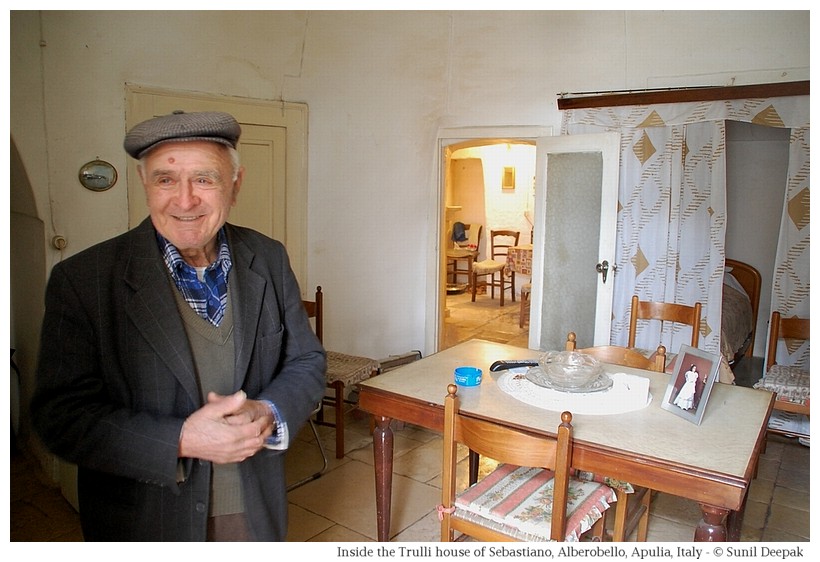 Even the Sant Antonio (St. Anthony) church in this area has roofs built like Trulli, though it is not a real trulli building. 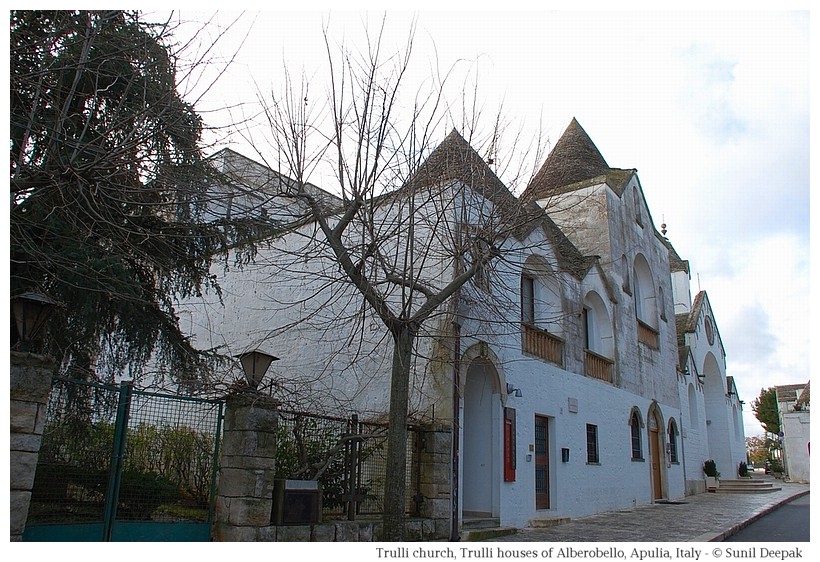 There are many souvenir shops selling local art work in Alberobello. I loved the art work in one such shop run by a lady called Maria Caporaso. Two examples of her art are presented below. 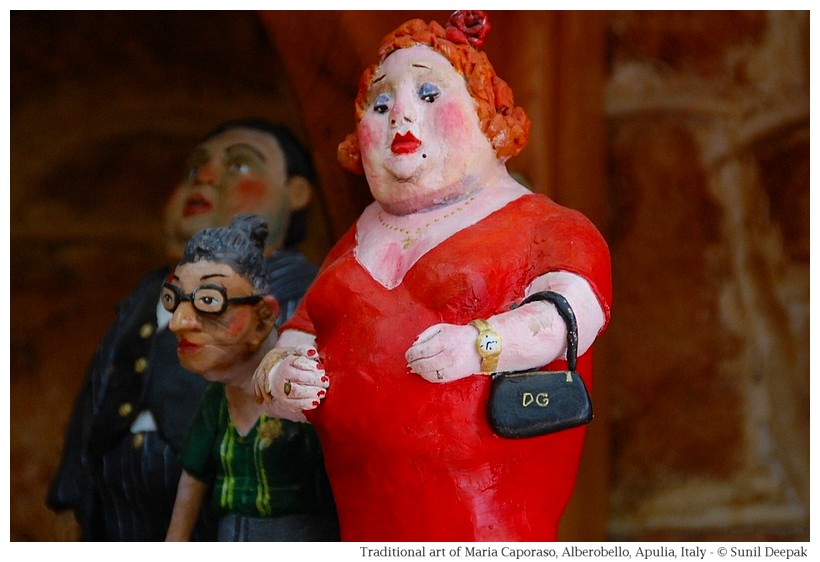 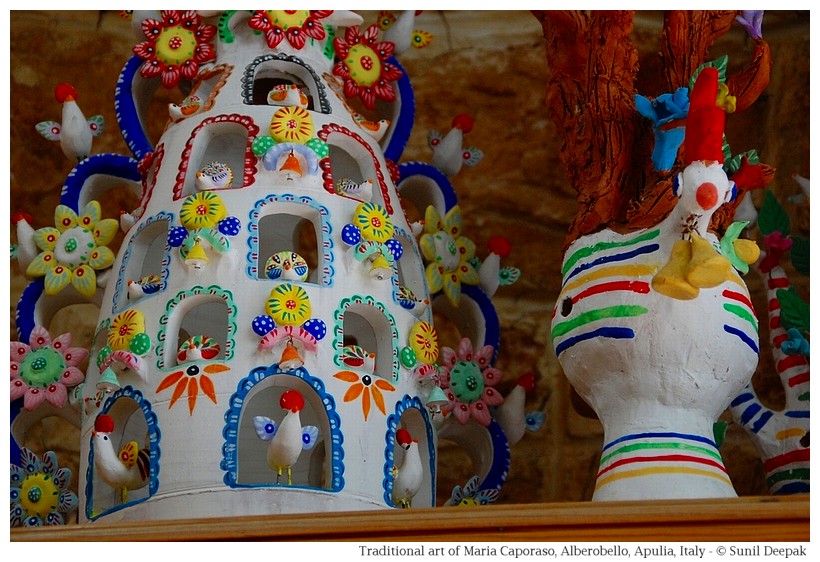 The traditional trulli houses of Alberobello with their black conical roofs make the old town look like a globlin-land from a children's book. I adored this city and its atmosphere.

The countryside around it is famous for its olive trees and oil. The sea is not very far and has amazing colours. There are many small characteristic towns nearby including the incredible city-in-white Ostuni. If you are planning an Italian holiday which is outside the famous big tourist cities, this is a great area for it. 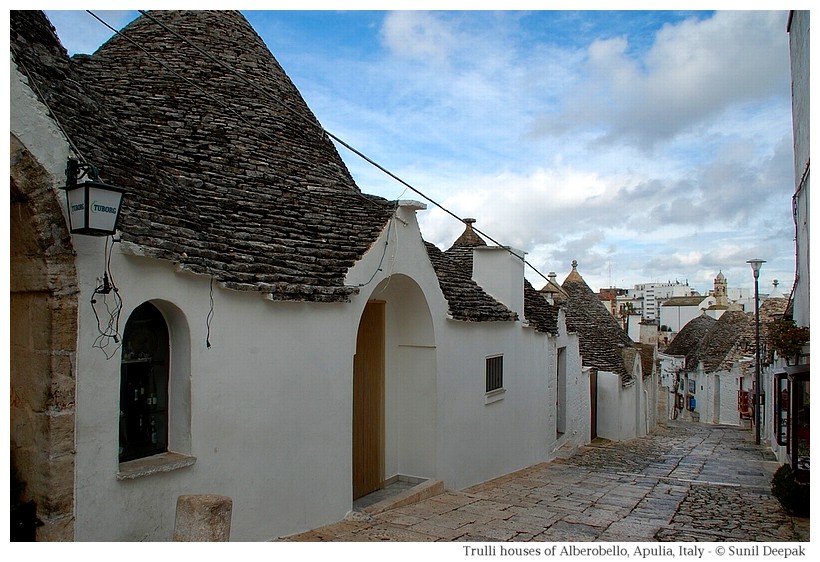 The last bit of information is for the Bollywood lovers - a part of the song "Khuda Jaane" from the Bollywood film "Bachna Ae Haseeno" with Ranbir Kapoor and Deepika Padukone was shot here in Alberobello.