Puccini's opera Madama Butterfly is among my favourites. It is the tragic story of a young Japanese girl's love for an American marine. 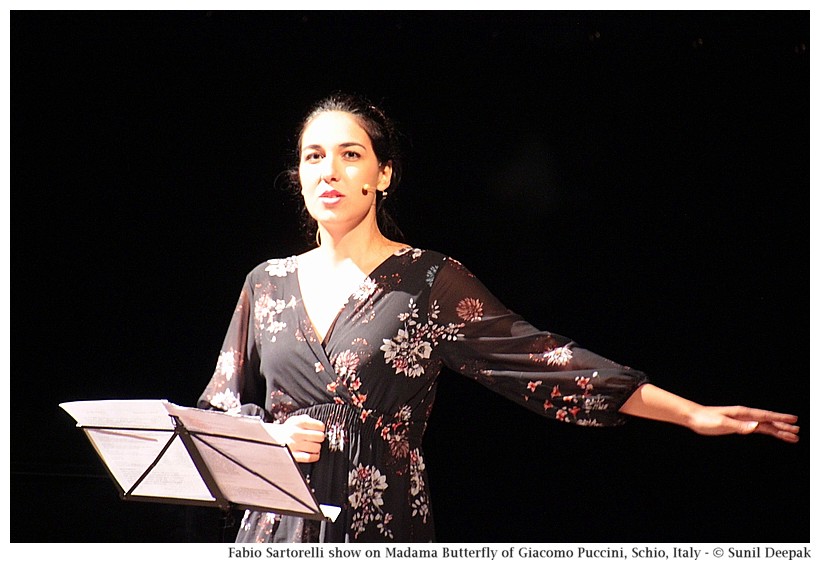 Recently I went to see a show about this opera. It was a multi-medial show by the Italian musicologist Fabio Sartorelli. It had stories, piano performances of music from the opera, old video-footage and live performance of some scenes by three young actors.

This post is about this show organised by Elia Dalla Costa cultural centre and held at the Civic Theater of Schio (VI, Italy).

"Madama Butterfly" was based on a French novel written by Pierre Loti in 1887. The opera was written by Italian writer and musician Giacomo Puccini around the turn of 19th century. It premiered as a two-act opera in 1904 in Milan but was heavily criticised. Later that year, Puccini rewrote it as a three-act opera, which became successful.

Operas are the theater of emotions in songs. The tone and the timbre of the voices of singer-actors such as tenor, soprano and mezzo soprano, determines their roles. Operas are a part of the Western classical music tradition.

This opera was based in the 19th century Japan. After centuries of isolation, Japan had opened to the west in 1854. As Western ships started arriving in Japan, their marines wanted the "women of pleasure", but Japan did not allow prostitution. So the women were sold as "temporary wives" to those marines. 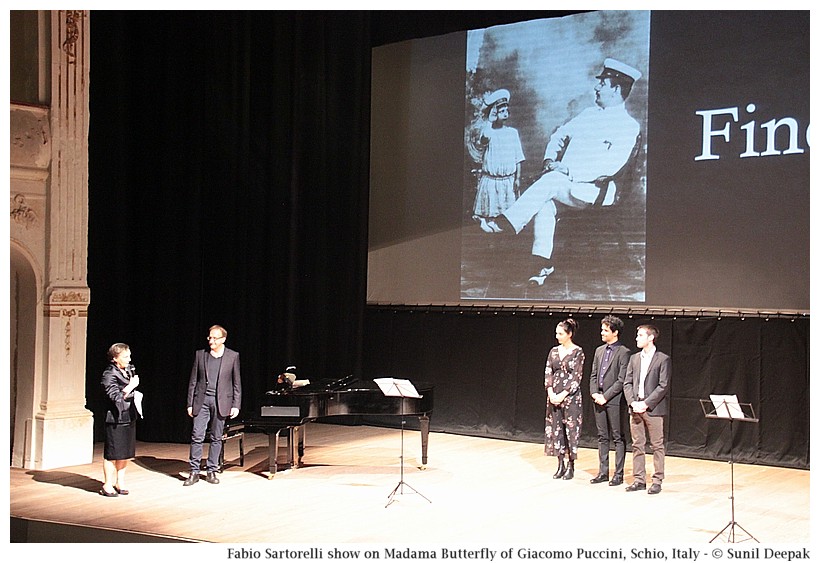 Opera's heroine Cho Cho (Butterfly) is a 15 year old girl who becomes the temporary wife of an American marine called Pinkerton. She is naive and falls in love with the man she thinks is her husband. A month later, Pinkerton goes back to America telling Cho Cho that he will be back soon. Cho Cho gives birth to a boy and waits for her "husband". Finally after 3 years, Pinkerton returns but is accompanied by his American wife. Cho Cho commits suicide to facilitate that her son can go to America with his father.

This theme has been adapted also in innumerable Bollywood films such as "Ram Teri Ganga Maili", in which young innocent girls from villages or mountains fall for slick city guys.

Fabio Sartorelli is a musicologist from Bologna university and had studied piano at Milan conservatory. He teaches at Como conservatory and Academy of Scala theater of Milan. He also gives talks and performances related to the lives, works and performances of music artists like Bach, Haydn, Mozart, Puccini, Stravinskij and Verdi. 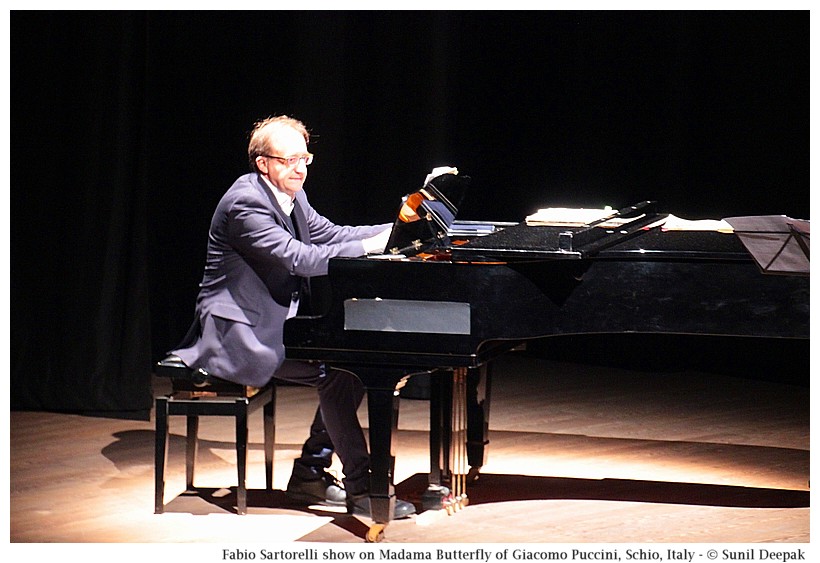 The show touched on Puccini's opera from different angles - from the ideas of racism and colonialism that form the context of the opera, to Giacomo Puccini as a person, and from the different versions of the story of Madam Butterfly written by other authors, to the emotional culmination of the opera when Cho Cho San commits suicide.

Sartorelli explained that in the initial version of the opera, Pinkerton did not appear in the final act and did not show any remorse about what had happened to Butterfly. No tenor wanted to play Pinkerton's role and the opera was heavily criticised. Thus Puccini changed this part of the opera.

The opera was written in a period when there was great public interest in the mysterious Japan that had opened its doors to the foreigners after many centuries. The earlier books about this story, not knowing how the Japanese people talked, had used the American black slaves as a model for expressing them linguistically.

On one hand, the opera showed Cho Cho as a Christian convert, which might have made it easier for the western audience to identify with her fate as an unfortunate woman. On another, the "woman" was actually a 15 year old child, also because in that epoch, exploitation of minors was not seen in the way we look at it today.

The show also touched on Puccini as a person, such as his love for cars, his travels to America, his fame in that country, and his money-making from advertising for pens and mouth-washes. 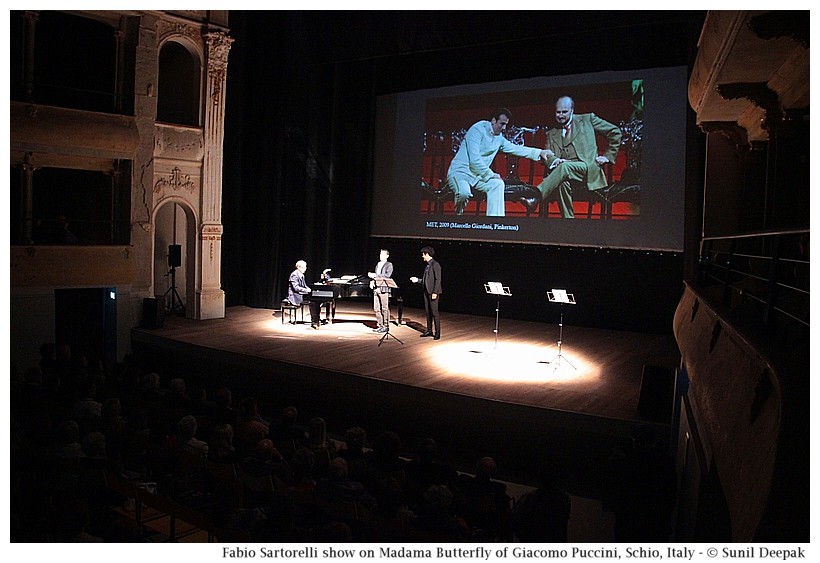 Three young actors from Piccolo Teatro of Milan (Francesca, Niccolo and Carlo) performed some scenes from the opera.

Sartorelli is an able communicator and a good piano player. He understands the stage, how to raise the tension and how to make people laugh. Though some of the issues touched upon in the show were serious - such as racism and the misrepresentation of cultures, Sartorelli treated them lightly, with wit and irony.

I loved the whole show and Sartorelli's skill in putting together so many different ways of looking at and understanding the opera, its history and the stories of persons linked with it.

For me a key reflection from this show was that we can look at the famous creative maestros like Giacomo Puccini in critical ways - to see them not as mythical figures but as human beings, with their weaknesses and warts, without diminishing in any way the recognition of their genius in creating amazing works of art. 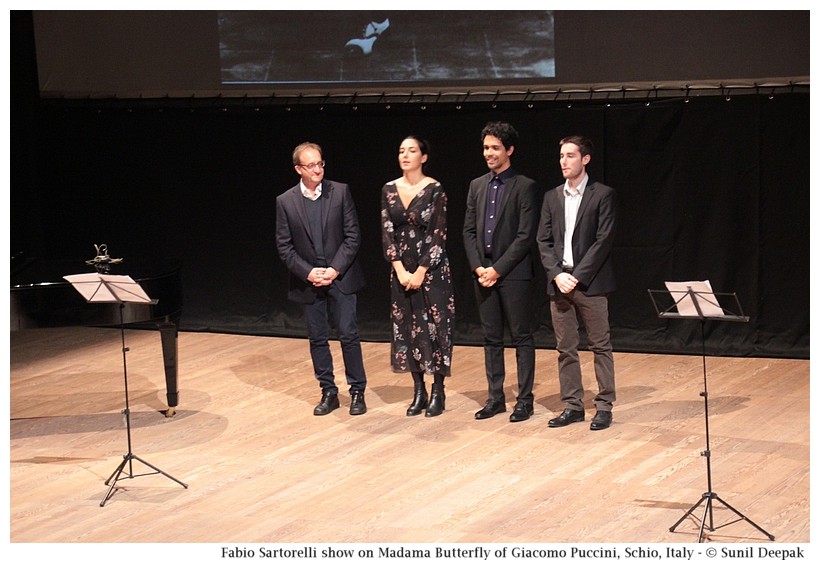 It is also important to remember the context of those times when we criticise many of its specific aspects. Such an opera, if written today, would very likely be booed and forced to close down by protesters. For example, for much less, in recent times writers have been accused of cultural appropriation and made to pay a heavy price.

Loving operas written hundred or more years ago means learning to look at those artistic works from different angles and yet continue to be touched and moved by them.