Hanuman, the legend of the monkey god

As a child growing up in Old Delhi (India) in early 1960s, for me sometimes the people from the ancient Hindu stories were as real, or perhaps even more real, than the actual people around me. Children's magazine Chandamama, Ramlila performances in the DCM grounds and recitations of Ramayana by visiting brahmins in the street-square near our home, had all contributed to make me familiar with the characters of Ramayana, including that of Hanuman ji.

Hanuman is one of the most loved Hindu deities in India. He is considered the symbol of valour, loyal service and self-control. For adolescents and young men, he is considered as the patron of Brahmcharya (celibacy) while reciting his prayer called Hanuman Chalisa is suppose to provide the believers with courage and overcoming of fears. 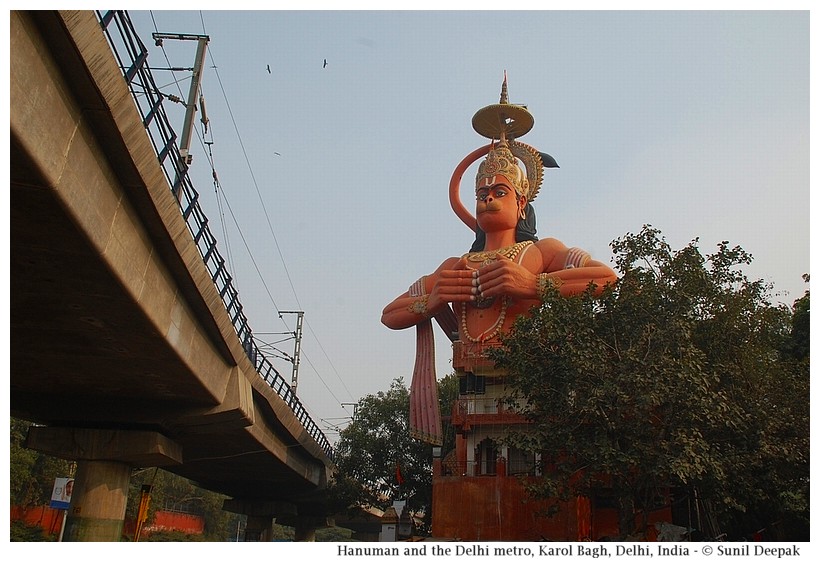 In this post, I want to present some of my favourite images of lord Hanuman from different parts of India, along with different stories linked to this god. The first image presented above is from Karol Bagh in Delhi, where the giant statue of Hanuman rises next to the metro line, juxtaposing the old mythologies with the modern India.

The oldest mention of Hanuman is in Rigveda, where he is called Vrishkapi, the Vrish monkey. Besides the Hindu texts, he is also mentioned in Jainist and Buddhist texts. The stories of Hanuman can traces their origins to the ancient prehistorical oral traditions of India. Along with the spread of Hinduism and Buddhism in the far east, the legend of Hanuman also spread to countries like Thailand, Cambodia, Vietnam and Indonesia.

The figure of Sun Wukong (monkey king) in Japanese mythology is very similar to Hanuman's story. The same Sun Wukong myths had also inspired the recent Chinese film "The Monkey King", in which Sun Wukong takes birth from a divine crystal which falls on the mount Huaguo.

The second image of Hanuman is unusual since it presents a giant green coloured statue from the Trimurthi temple in Kanakpura on the Bangalore-Mysore road in Karnataka. 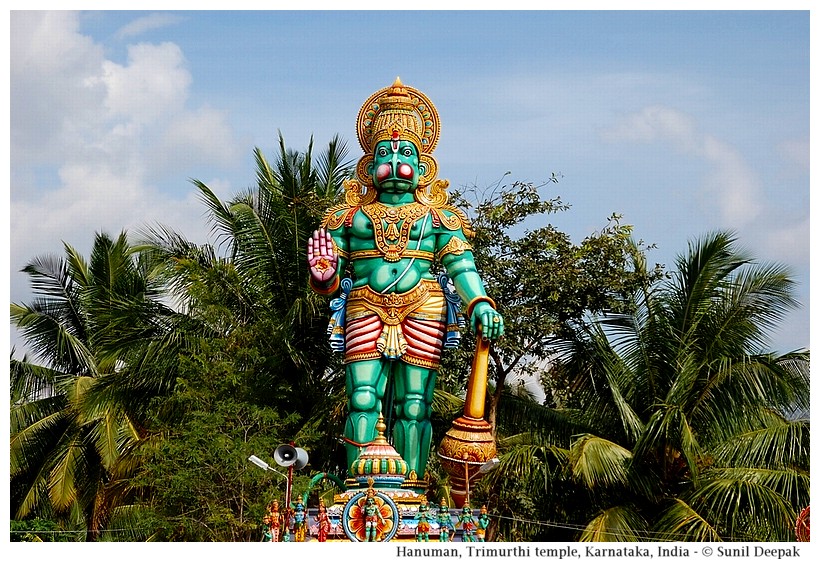 Legends about the birth of Hanuman

There are two main stories linked to the birth of Hanuman. In one, he is the son of the wind god Vayu and thus, is called Vayuputra, and is born with the gift of flying. In the second story his father is an ape called Kesari (Saffron). Even in this story, Vayu, the wind god plays a role in Hanuman's birth and is thus considered his guardian.

Another legend about baby Hanuman is that once he thought that sun was a fruit and wanted to catch it and eat it. Sun allarmed, asked for help from the god Indra, who used his Vajra (thunderbolt) to stop the baby. Because of the Vajra, baby's jaw became more prominent, giving rise to his name Hanuman (prominent jaw).

The next image has Hanuman as a chimaera, a combination of different human and animal beings expressed through his five heads and ten arms. 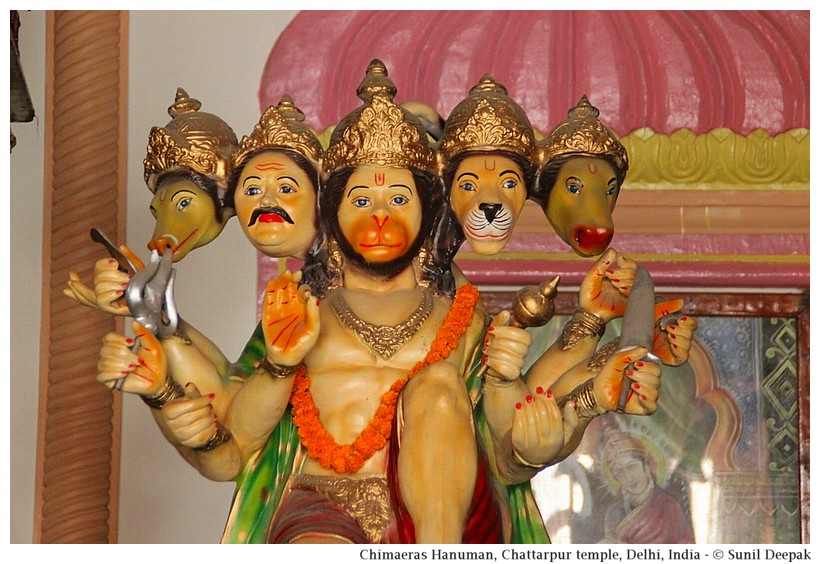 Hanuman and the stories of Rama of Ayodhya

In the popular imagination, the figure of Hanuman is closely linked to that of Rama. Most statues and images of Hanuman present him as a Ram-bhakt, like in the image below where he is shown holding a tiny statue of Rama in his hands. 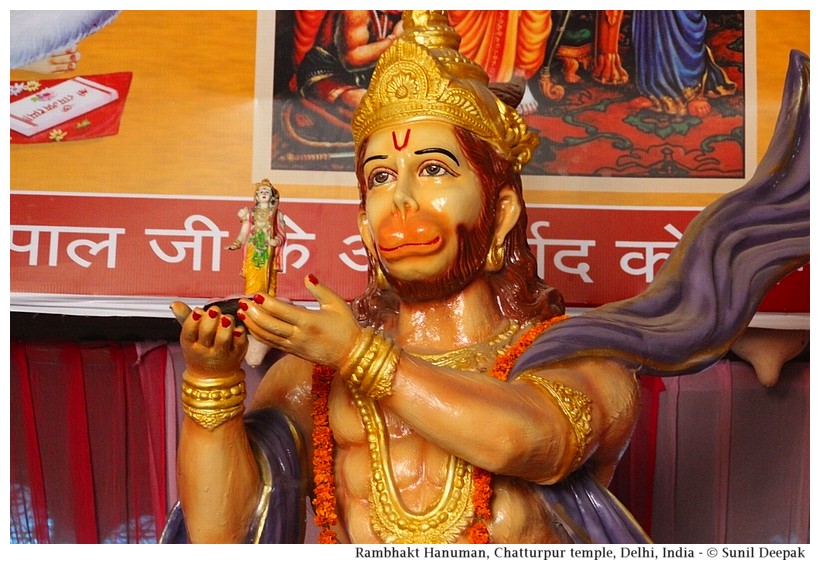 In both Valmiki's Ramayana and in Gosain Tulsi Das' "Ram Charit Manas", Hanuman first appears in Kishkindhakand chapters of the story, when the two brothers, Rama and Lakshman, searching for Sita, reach Rishyamook mountain where the Ape king Sugriva lives. When Sugriva sees them, he gets afraid, and asks Hanuman to go and find out about their intentions.

(To Sugriva who was afraid of Bali, the clever and articulate Hanuman said.)


In Ram Charit Manas, Hanuman is introduced in the story when Sugriva speaks to him:

(Afraid Sugriva said: Hanuman, they are two strong men, go to them dressed as a Brahamchari (celibate) and try to understand about them)

Gosain Tulsi Das is also credited with the prayer of Hanuman Chalisa (literally, "forty verses of Hanuman"), which is supposed to infuse people with courage and remove their fear. Below is another figure of Hanuman showing Rama and Sita in his heart. 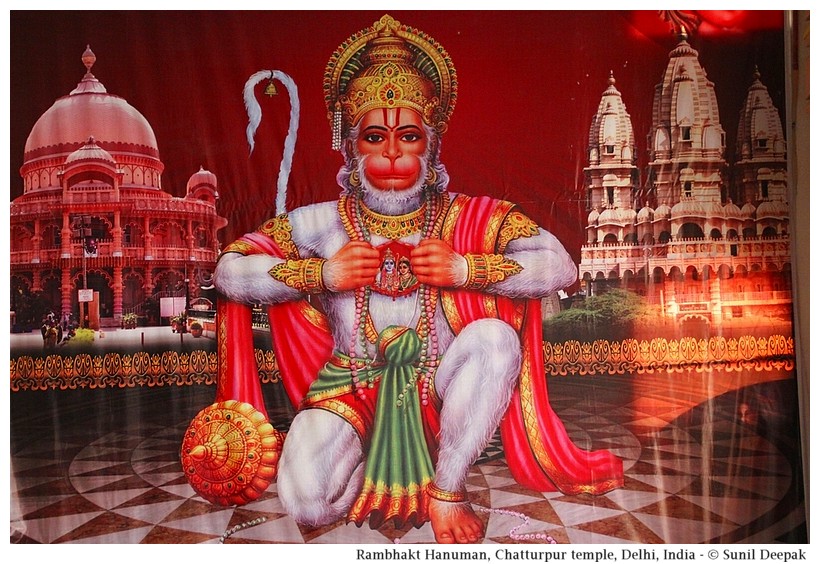 Hanuman as the patron of healing herbs

During the war between Rama and Ravan in Ramayan, there is an episode where Lakshan is injured gravely and to cure him Sanjeevani booti (life-giving herb) is needed urgently. 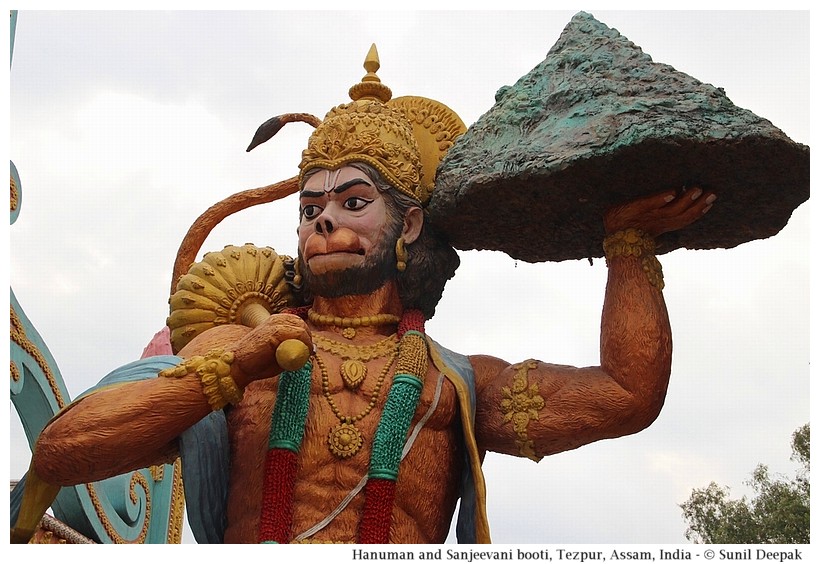 Since Hanuman has the gift of flying, Rama asks him to go to Meru mountain and bring the herb. Hanuman, unable to identify the herb, decides to bring the whole mountain. This episode is also very popular in the Hanuman statues as shown in the image above (from Tezpur, Assam) and below (from Gangtok, Sikkim). 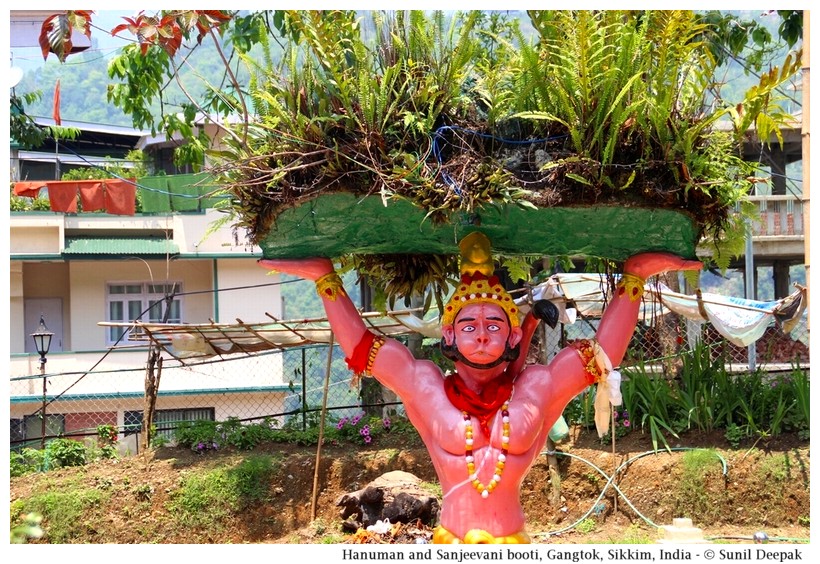 In Hinduism, meanings can be understood at different levels. Thus, for common people, Hanuman is a deity, whose help they can ask for. At the same time, often the old stories have deeper metaphysical meanings in Hinduism.

For example, according to the Vedbhashya blog which looks at correlations between Quantum physics and ancient texts of Hinduism, the original story of Vrishakapi (Hanuman), is a metaphysical description of an atomic force binding the central nucleus to the sub-atomic particles moving around.

Personally, I love the way different animals and plants play a central role in different stories of Hinduism. Apart from Hanuman, a Garuda eagle called Jatayu also plays an important role in Ramayana. Two gods, Ganesha with an elephant head and, Narsimha, a half lion and half human incarnation of Vishnu, are other examples of animal-human relationships in Hindu mythology. I think that this way of looking at nature is important to promote ecological sustainability of all life on earth.

The image below presents another unusual Hanuman, where he is shown older and with a rudraksh-mala around his neck, like an ascetic giving his benediction to his followers. 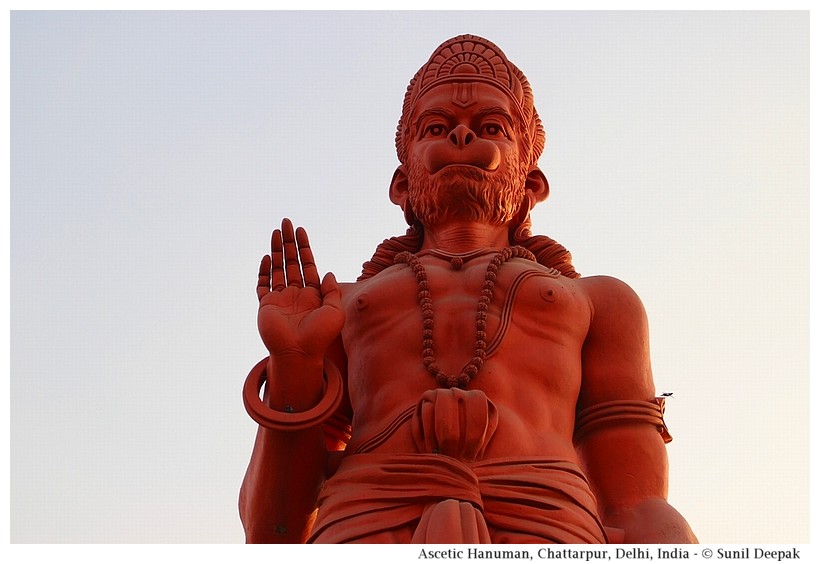 The image below presents a tiny temple of Hanuman along the banks of Ganges in Varanasi, which has an unusual sleeping Hanuman statue. 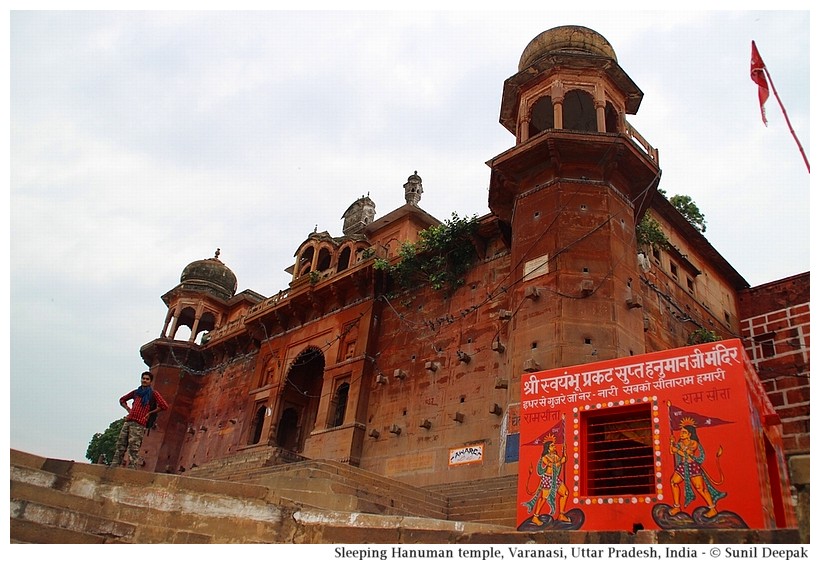 To conclude this photo-essay about Hanuman, the last image is from a Ramlila procession in Chandani Chowk in old Delhi. The image shows the carriage of Hanuman with his Vanar sena (monkey army). The person who plays the role of Hanuman is Mr Ram Chander, a devout follower of Hanuman who has been playing this role for more than a decade. 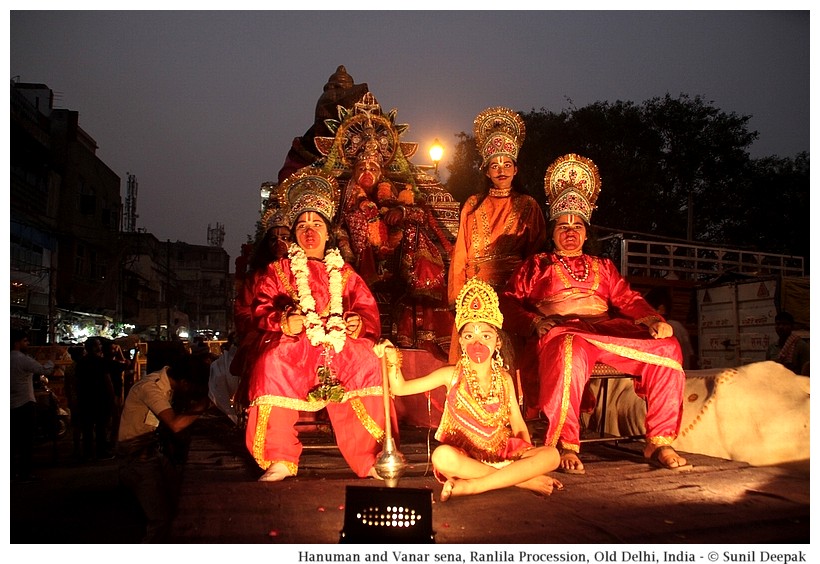 To write this post I went through my huge image archives. I was surprised that I had so many images of Hanuman and it was not easy to choose the images for this post. I had great fun in selecting these images and in writing this post.

Do tell me which form of Hanuman ji out of the ten images presented above, did you like most?