The wonderful world of Steam-Punk

Steam-Punk is a fashion, literature and art movement inspired from the innovations in the 18th century which led to the industrial revolution. Recently I saw some steam-punk enthusiasts dressed in their costumes. 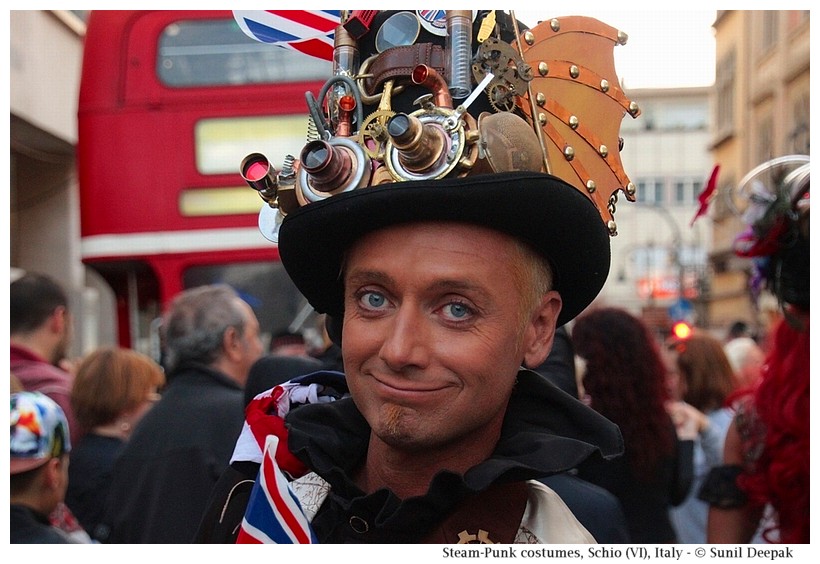 It was my introduction to the steam-punk movement - I had never heard of them before. All the images in this post are of the persons from the Italian "Steam-Punk Nord-est" association.

People have always loved dressing up in costumes, for example, in the Venice carnival.

The Punk style with striking costumes and colourful spiked hair styles made their appearance in the 1970s. In the 1990s, imaginary worlds of science fiction and fantasy, led to different movements like cyber-punk and diesel-punk. For example, during the 1990s, while living in Bologna (Italy), I came across groups of young persons, living as homeless urban vagabonds, with long matted hair and dogs. They were known as Punkabestia (beast-punk). The Steam-Punk movement also started in those years.

In more recent years, role-play games and fantasy worlds have become popular and are called Cosplay. I love the colourful Cosplay costumes.

Steam-Punk ideas were influenced by writers like Jules Verne and H. G. Wells. Scientific advances made in the 18th century such as the steam-ship and steam-engines play an important role in Steam-Punk. 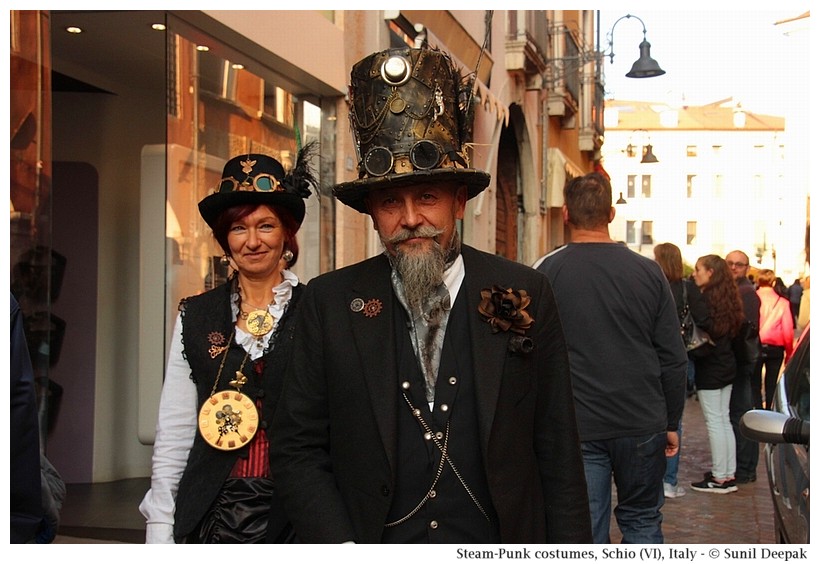 The term "steam-punk" originated in the late 1980s as a variant of "cyber-punk". Science-fiction writers of Steam-Punk, imagined alternative worlds based on coal and steam power. For example, American writer Paul di Filippo wrote a trilogy of steam-punk novellas in 1995.

Steam Punk is a retro-futurism - a retro (old) technology imagined as a future. It can mix digital technology with handmade art. For example, look at the amazing old rusty-looking digital camera used by the Steam-Punk enthusiast in the image below. 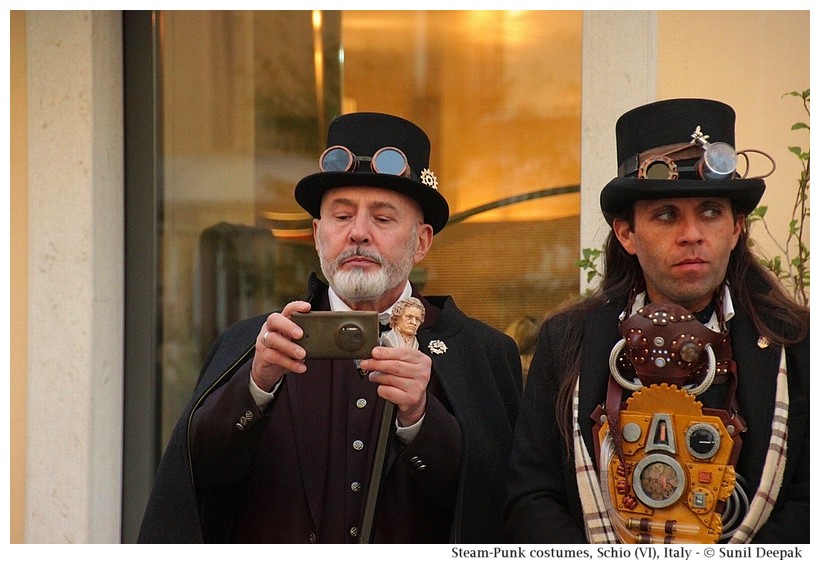 The steam-punk brings together modern costumes and some elements from Victorian era such as corsets, gowns and petticoats for the women, and waistcoats, long coats, top hats and bowler hats for the men. 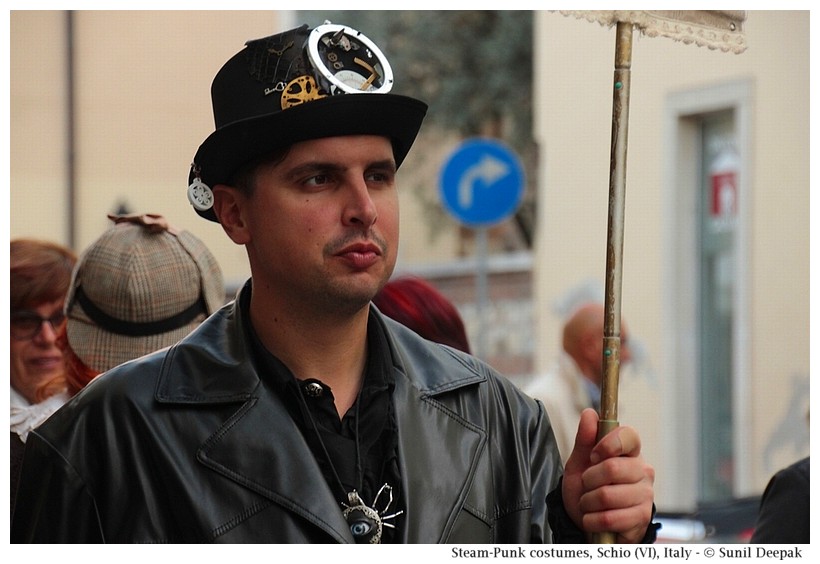 The costumes are accompanied by accessories such as old airplane goggles, parasols, stylish guns and sling bows. 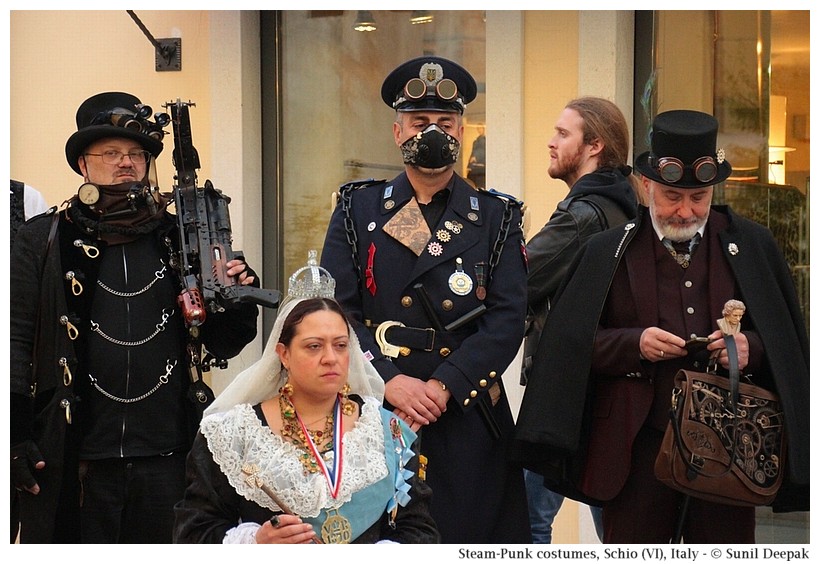 Many well known fashion brands such as Prada, Versace and Dior have come up with clothes inspired by Steam-Punk. However, the real steam-punk enthusiasts invest a lot of resources and personal imagination in creating their costumes. For example, check the beautifully made complex hats worn by the two persons in the image below! 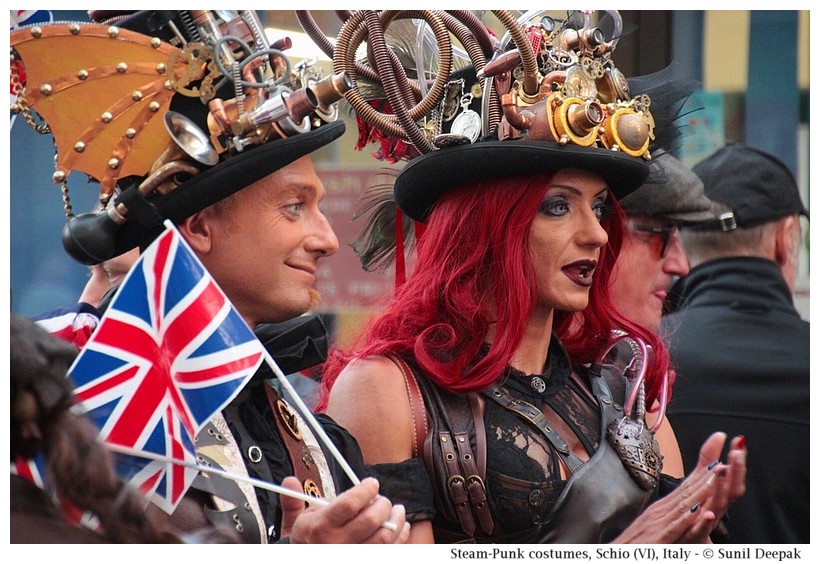 The Steam Punk association of the north-east of Italy, whose members are featured in this post, came to Schio, where I live, during a recent cultural festival called the British Day. Among the group, they even had a look-alike queen Victoria (in the image below). 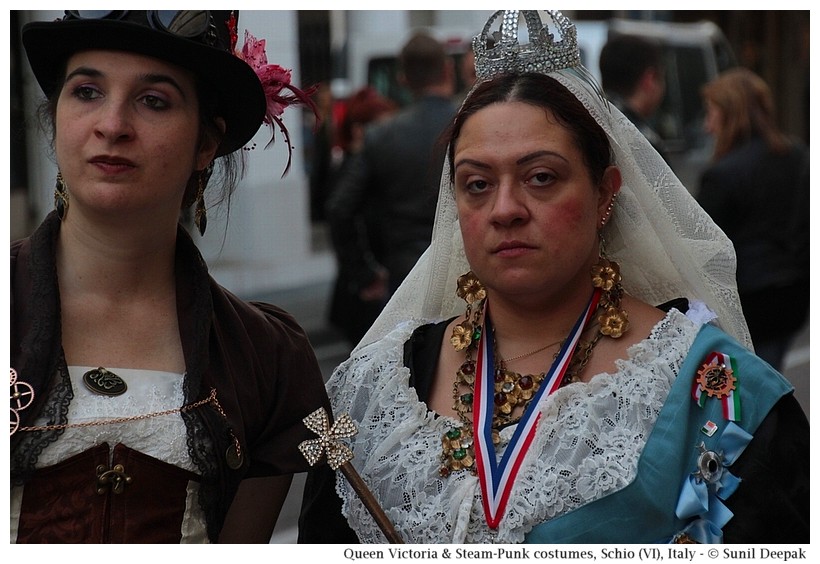 The members of this association design and wear steam-punk costumes and show them off during the different cultural festivals in the region. They also organise symposiums to present their "steam-punk" inventions and creativity.

As our societies become more developed and as we have more free time, I think that movements like steam-punk will become even more common. They are a way of having fun. They are also a way of organising smaller communities around a common-interest, to escape from the anonymity of the modern urban life.

For me, it was an opportunity to learn about their striking and colourful world. That day, my favourite costume was a photographer with an ancient looking camera (in the image below) though I am not sure if it worked!. 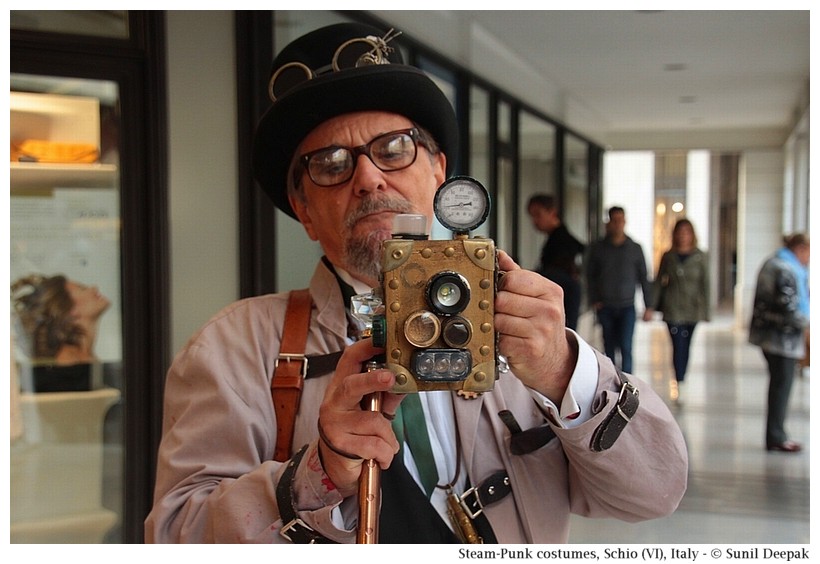 Using your fantasy, if you could create an imaginary world based in your own cultural ethos and history, what kind of worlds would you like to imagine?