Since 2013, around Christmas every two years, Schio in the north-east of Italy holds an art exhibition called Papermade, focusing on paper-art. This first part of my blog-post presents some of my favourite exhibits from the Papermade exhibition held in December 2013. The second part of this post will look at exhibits from the event held in December 2017. 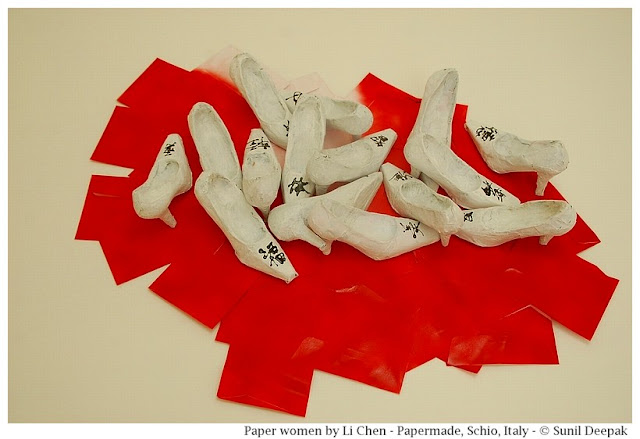 The above image presents Paper Women with  papier-mache white shoes shown against a red backdrop. It was one of my favourite installations from that exhibition. It was a work of Taiwanese artist Li Chen.

Let me also explain why I liked Chen's shoes! I think that appreciating art is about emotions provoked by the art. It reminded me of a Bollywood song from the 1964 film "April Fool"- "Mera naam Rita Cristina, ai-yai-ya, mein of Paris ki haseena, ai-yai-ya". You can watch this song on Youtube and try to guess why this work of art reminded me of that song!

Use of paper in art

Paper-making was invented in China around 2000 years ago. It came to Europe in the 12th century.

The tradition of Papier-mache, combining sheets of paper and molding them to create sculptural forms, also goes back to early China. It was adopted in France in the 17th century, who gave it its name by which this technique is widely known today.

Cutting paper for artistic expression was also invented in China in the 4th century. Folding papers to create paper-sculptures called Origami developed in the Edo period of Japan in the 17th century. Collage and Assemblage created by gluing together different materials on paper to create art are credited to early 20th century France.

Thus, using paper in different ways as a medium of artistic expression is not new. The Papermade exhibition of Schio brought together some examples of these practices.

Here are some of the art installations that I liked from Papermade 2013.

This installation had a book whose pages had been cut in different ways, creating layers of paper-strips with scattered and incomplete words, growing in different directions. At some places, the paper strips were weaved like baskets, at others they were free floating. 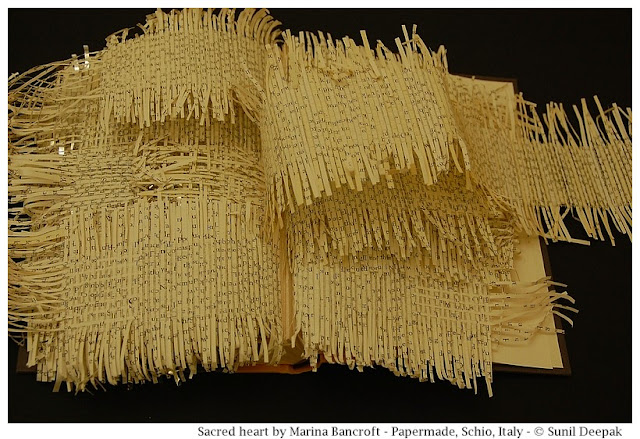 This installation also had books in Coptic calligraphic language, bound together along with forms in fluffy white cotton. The yellowed and blackened margins of the books, which were deformed as if they had been out in the rain, gave me an idea of passage of time and experiences of life. 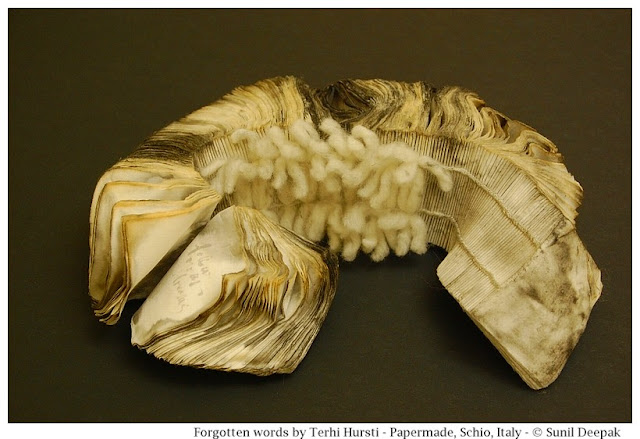 The fading inks of the calligraphy made me think of all the languages, stories and cultures that are disappearing and dying, as young people think that English language and Western cultural values express superiority, modernity and progress while indigenous cultures and values are reduced to becoming museum pieces.

This installation used a wooden structure on which plastic containers in different forms and colours were recreated with paper-mache. It reminded me of some of my journeys in Africa, where in the rural areas, it is not easy to find petrol pumps and where people, especially women, sit along the roadsides selling petrol in colourful plastic containers. 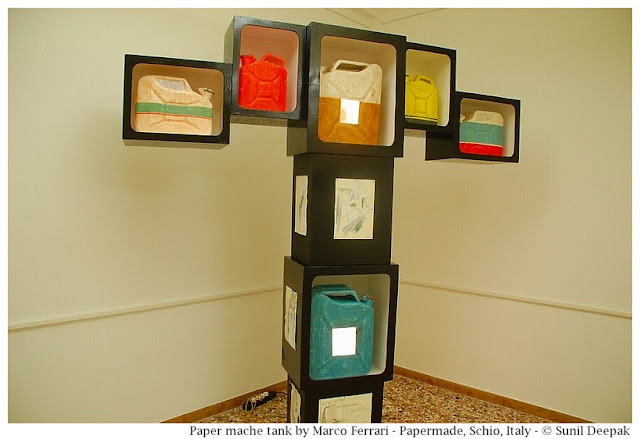 It also made me think of the tons of plastic bags and bottles that are littering our lands, ponds, rivers and oceans, creating a vast new continent of garbage.

The installation had a central rod covered with paper that carried a three-tiered cut-paper flower at the top. I am not sure about the symbolism of the two cups holding the round moon of cut paper, but I liked its simple lines and symmetry. The textures of handmade paper were also very prominent in this work. 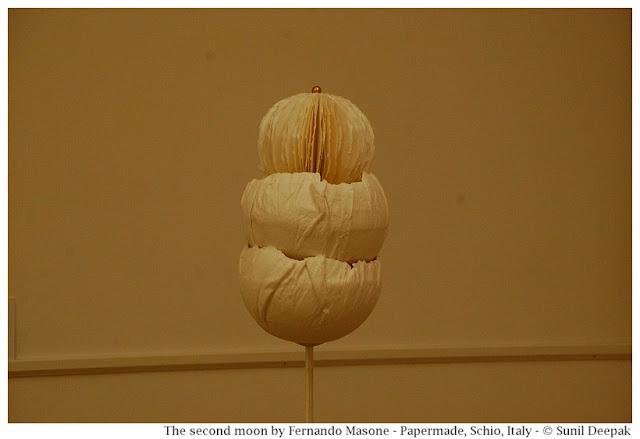 This installation had rolled up papers from newspapers and magazines, stitched together in different layers along circular wire frames that brought a mild sense of vertigo as I looked at them. It was one of the most physical installation in the exhibition. The artist Rosemberg is a psychiatrist and she adds different layers of meanings to her works, both physical and psychological. 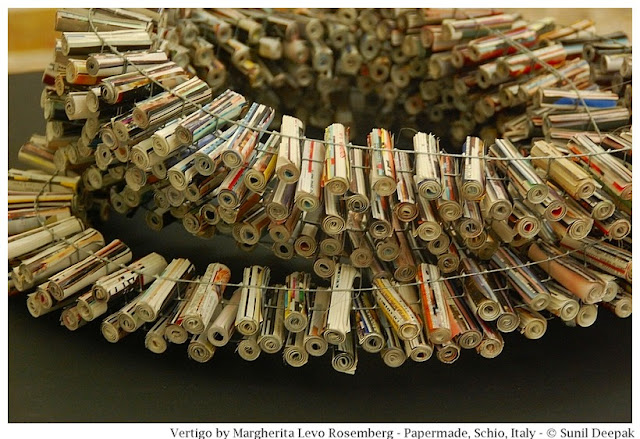 Let me conclude this post with the work of another artist that I liked very much.

The British artist had two installations and I liked both of them. Design for Living had designs made by raised-up relief on handmade paper. It had geometric forms laid out in grids, mixed with islands of people. It made me think of a map for blind and low-vision persons and I liked its gentle colours. 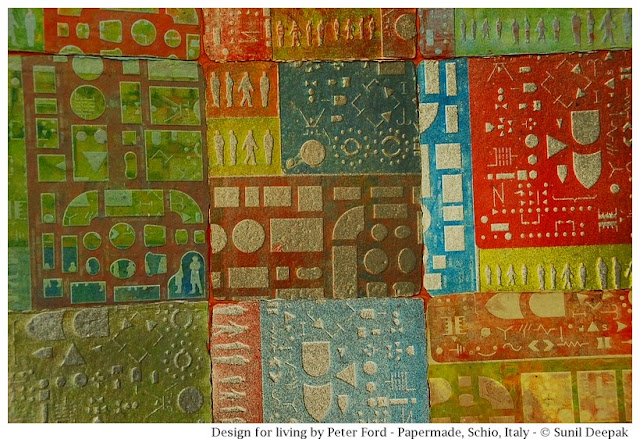 Lost Letters had wood-block prints in rectangular blocks that reminded me of ponds where they grow fish and prawns. Round bumps of coloured papers rising up in those ponds were like some little islands. Words like memories and forgetting floated in those ponds. 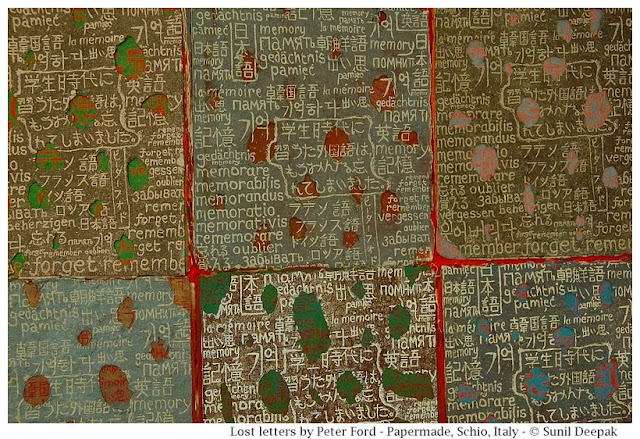 I liked the idea behind the Papermade exhibition. However, many of the exhibits were paintings or printed things on paper, and I did not find their ideas very stimulating or innovative. I must also confess that I am not enthusiastic about digital art - I feel that it is a kind of artistic cheating if we use computers to create art. I am sure that many of you would not agree with me on this point!

In the second part of this post, I will talk about installations from the more recent Papermade exhibition held in December 2017.