Papermade is a biannual art exhibition held in Schio in the north-east of Italy around Christmas. As its name suggests, it focuses on paper art. The last Papermade exhibition was held in December 2017. In this post I present some of my favourite works from this exhibition, starting with the installation that I liked the most. 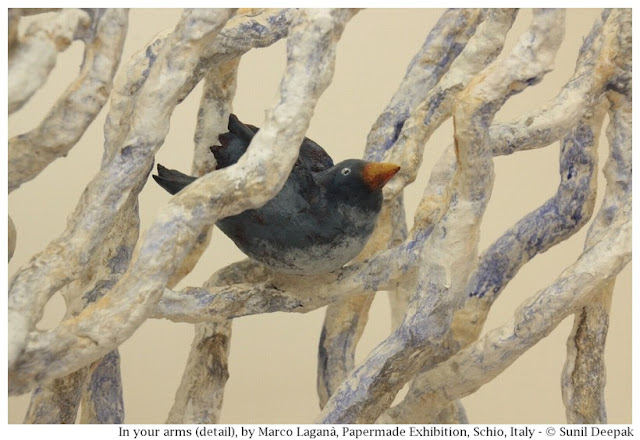 The above image shows details of a sculpture called "In your arms" by the Italian artist Marco Laganà. It was made by using papier-mache on a wooden structure, showing a soft whitish-bluish tree with a black bird. It was the art work that I liked the most in this exhibition because it gave me a surreal and dreamy feeling. I also loved the texture of branches and the bird. In fact, I think that in appreciating the paper art, texture of the paper plays a crucial role.

Let me now present some other works that I liked in this exhibition.

Karen had created this work by cutting shapes in the paper with a laser and then stacking those papers over one another. This led to the creation of two kinds of towers - a downward going gentle tower/well that reminded me of the geological configuration of the Echo point near Munnar in Kerala, India. The other was a tower rising up in the air. 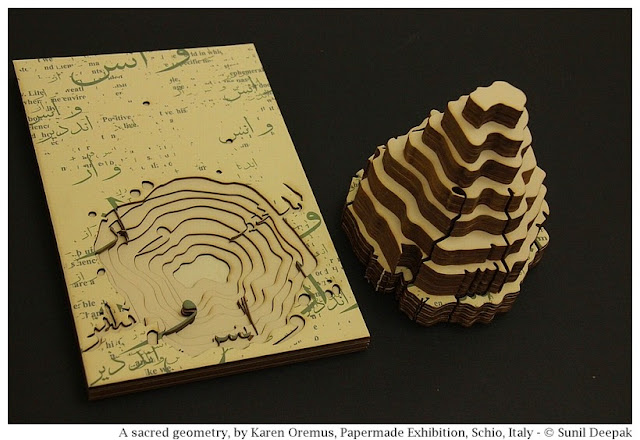 Scattered words in Arabic and English on the two sculptures made me think of the mythical Tower of Babel.

Alexio used paper and the origami to create a dancing old couple. The paper folds were very effective in creating wrinkles and screwed-up eyes on the faces of the dancers. (Click on the image for a bigger view) 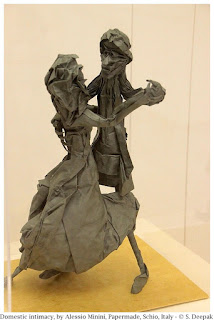 This sculpture reminded me of very similar paper sculptures that I had seen in the central square of Mexico city in the early 1990s. I had even bought one of those sculptures as a gift for a friend. I wonder if something similar has inspired Minini's work.

At home by Maurizio Corradin (Italy)

Maurizio, an art therapist, had made a huge installation of a dome using paper, plastic, coloured LED lights and painting. The image of this work that you will find below shows the close-up of one of the sculptures near the bottom of the structure so that you can appreciate the kind of work that had gone in creating it. 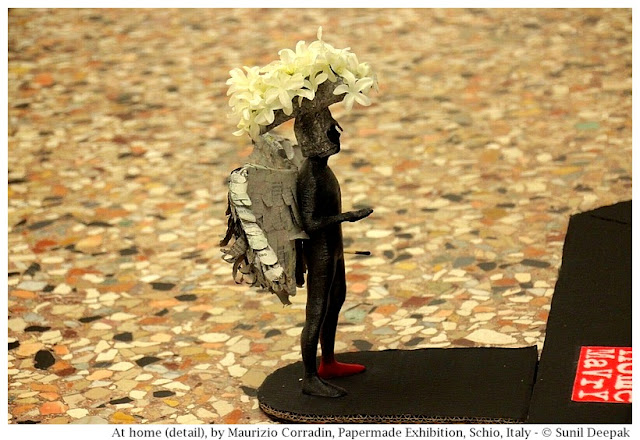 The tiny figure seems to be made of metal wearing a helmet along with a red shoe in the left foot. It has wings of paper while white flowers adorn its head. It also has a wood stick with its tip painted black representing an erect phallus, giving the idea of a tribal fertility god.

Overall, I found the installation to be a little gimmicky for my taste and it did not evoke an emotional response in me. However, I did appreciate some of the details of this work.

House of my mind by Daniela Camuncoli (Italy)

Daniela is known for her paper collage work. She had made a wonderful collage of a young woman with earnest blue eyes that I loved for its colours, form and textures. I thought that it was unpretentious, clean and direct. It also had a charm in it that made me stand there and look at it for a very long time. 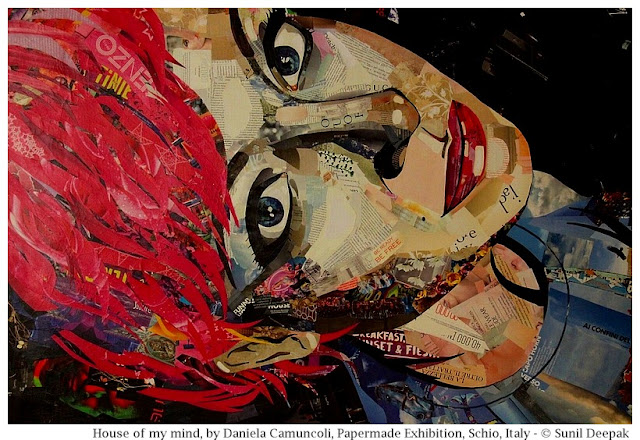 Apart from David Laganà's papier mache installation mentioned above, this was the art work that I liked most in this exhibition.

Some other Paper art installations

In the first part of this post presenting some works from a previous Papermade exhibition, I had explained that I am not fond of use of computers to create art - I feel that it is a kind of cheating. However, I also agree that my attitude towards digital art is a bit irrational - digital art is probably the future of art and artists need to have the freedom to use the medium they like for their art-expression.

Here are some other installations from the Papermade exhibition, which were good but at the same time, were based on a more traditional use of paper.

The first of these was a work called "Over confidence" by the Italian artist Alberto Balletti. It had been produced by an ink-jet etching. It showed a nude couple, probably in their fifties or sixties, who seem to be lying close to each other and yet distant, lost in thoughts with a kind of defeated look on their faces. I am not sure why the artist has named it "over confidence". Can anyone explain? 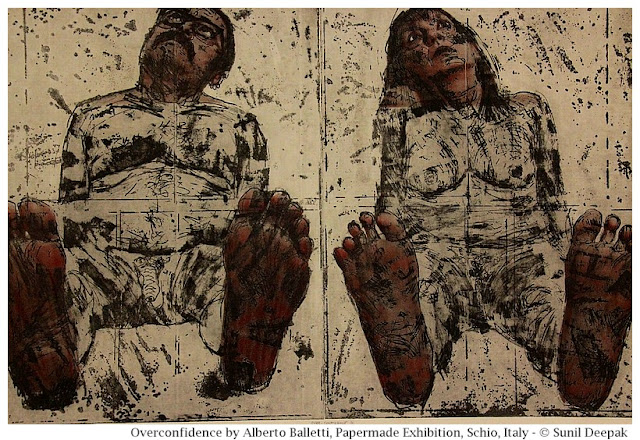 The second was called "Cartographies of the soul" and was by the Argentinian artist Alicia Candiani. It had a row of papers, each with blocks of orange and white colours with some superimposed images like the arm and the hand shown in the image below. 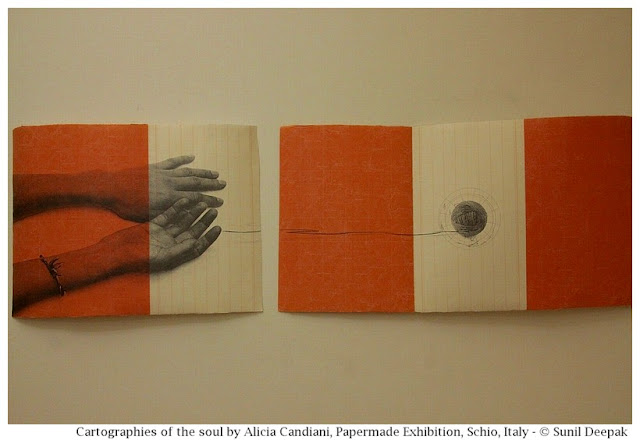 The third was called "Through the glass" by the Italian artist Simone del Pizzol. It had prints of an ink etching hanging in a row in a room, each showing some variation around a figure seen across a glass. 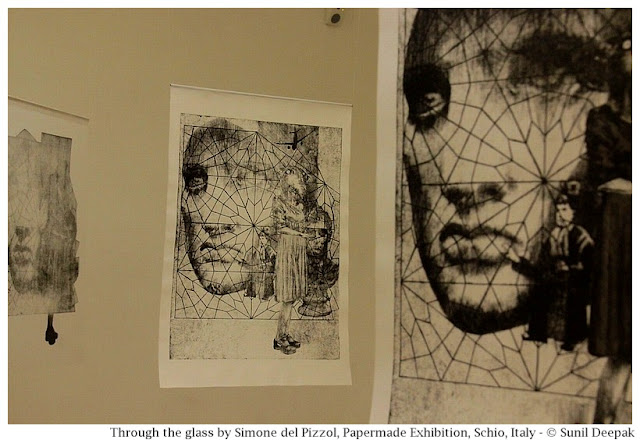 The fourth and the last art work of this group that I liked was called "Acathexis" and was by the Israeli artist Orit Hofshi. In this, the artist had used xylography (wood block printing), showing figures made in black ink against a red background. The image below presents some details from this work. 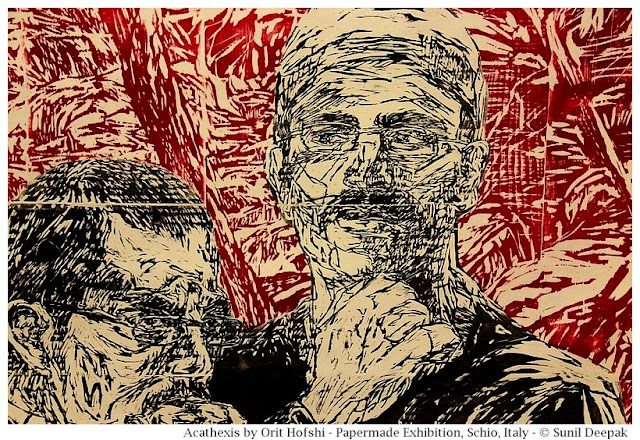 Acathexis is a psychoanalytical term used for persons who are unable to feel and show emotional responses. I think that probably this work showed Israeli persons who have been desensitised by the long on-going war with the Palestinians.

I like Papermade art when artists use paper as a building material through papier-mache, collage, assemblage, origami or paper-cutting, and not just use it to print or paint something. In the last Papermade exhibition, there were not so many examples of such use of paper to create art. Most of the works had used paper to print or paint. Thus, I was a little disappointed. However, I loved two works - House of my mind and In your arms.

If you had missed part 1 of this post about a previous Papermade exhibition, you can also check it.