A day in Florence

As I reached Florence, it was raining and it was cold. I shivered outside the Santa Maria Novella railway station. I had been trapped by my friend Roberto from the "School of health and sustainable development" in Florence. He was organising this big international meeting and one of his speakers had ditched him at the last moment. So I was co-opted.

It had been a long time since I had been in Florence. Perhaps the last time was in 2001, I am not so sure. It had been even longer since I had gone there as a tourist. As I looked around, hurried florentians were rushing off to work, holding on to their umbrellas. I had come an hour earlier, so I could afford to walk slowly, look around and smile at those who showed their irritation 'cause they were getting late for work or some appointment.

It is funny, how you can live next to the most beautiful place in the world and yet, how you stop seeing the beauty because you are too busy running. I guess, that happens to me as well in Bologna!

I love the old buildings on the street leading to the city centre from the railway station. I saw an ancient looking church on the way. The board outside said that it was first built around the end of ninth century. I decided to go inside. It was beautiful with old frescos on the walls that were peeling off. And, it was cold and dark. A young man in his impeccable business suit and briefcase, made the sign of cross hurriedly and rushed out. I like places that are still being used for the normal day to day life, even while the tourist stand around and gape.

The paintings and statues on the wall, gained more depth and life in the dim light. There was a beautiful painting of Joseph with baby Jesus in his hands, looking at the child with fatherly love, while Mary seemed like a self-satisfied mom, looking adoringly at her husband and the baby. Behind them in the painting, there was some high ranking priest speaking in a church with another younger priest kneeling on the ground. I am sure that painting was commissioned by that elderly priest, wishing to show himself off with the holy family to the congregation.

But what caught my attention was a group of statues with crucified Jesus in the middle. The saint like figure on the right, seemed to crush the head of a protrate man with his foot, resembling the Durga-Mahishasur statues.
After this brief stop-over, I proceeded towards the Duomo, the cathedral of Florence. It is one of the most beautiful squares in the world, with its pink, burgundy, cream and dark grey wedding-cake like church, bell tower and the round battistero.

While walking towards the Cathedral, my attention was caught by the plastic chairs under a tent outside a restaurant. The chairs at the outside edge had all been turned inside to save them from the rain. It thought it would make for a nice view of the cathedral, though the final result does not look very artistic!
While I admired the church, a group of tourists arrived, got down from the bus and immediately started clicking. All right, I know, with my own frequent camera clicking, I am no position to comment on the camera clicking of other tourists, but still it did look funny.

They must be Japanese, I thought. But as I came closer and heard them talking, I realised that they were Chinese. It must be a nightmare for these Europeans I guess, seeing all those Chinese, who are shown in the media as illegal immigrants, or as persons exploiting human labour to make cheap things and doing "dishonest" practices to dump their exports, to realise that now their bread and butter depnds upon these "lowly" tourists! Perhaps a day would come when Indian tourists will also descend here like a storm of birds, haggling over the prices with the souvenir shops. Perhaps they already are!

Chuckling to myself about the injustices of life, I walked towards the Piazza della Signoria, or the square of the Lords, with its magnificant old palace and the statues.

The famous statue of David by Michaelangelo, outside the gate of the old palace is a copy, the original is inside the museum. I am surprised that the church and all those self-righteous leaders have not cried to ban or cover those statues. Actually they must have tried. Two smaller statues next to the door, have the genitals covered by fig leaves, though they seem to have an opposite effect, in the sense, from a distance, they look like pubic hair.
Next to the old palace, the loggia has some of the statues for display, including two by Giambologna, the sculptor who did the Neptune statue for Bologna.

I think that this is a sign of civilization and of abundance, that city has decided to put some of good statues outside, so that general public can also admire them without going inside the museums and without buying any tickets.

In fact in Italy, Florence has the reputation of being a civilized and cultured city like Lucknow in India. When Italy was unified, it adopted the language of Florence as the "standard Italian", a bit like Avadhi-Khari boli were adopted as Hindi. My tourist time was almost over, so I rushed to have a quick look at the old bridge over the river Arno.
I almost ran to Piazza Santissima Annunziata to my meeting as I was getting late. But I was not satisfied with my tourist visit of Firenze and I wanted more. At lunch time, I decided to forego the official lunch and spend the hour walking around. The meeting was in Innocenti centre, an old orphanage and also the seat of Unicef in Italy. There is a statue of a boy sitting on the paperboat outside the Innocenti library, that is very nice.

Right outside the Innocenti centre, there are two fountains with science-fiction kind of Martian figures puking water on the back of flying turtles. Amrita Shergill had once lived around here, I had read once. I walked back to the Cathedral to see if I could go inside and have a look. In the morning, it was still closed. Inside, it was surprisingly very empty and quite unadorned. The sight of women lighting candles was beautiful.

Even if the cathedral is unadorned, it has a beautiful dome (the famous Brunelleschi dome, a marvel in the medieval world, when it was built) with wonderful paintings, though you need to have a mirror in your hand to look at them since looking up directly can strain your neck!
After the cathedral, I walked to the gallery outside the Uffizi, supposedly one of the most beautiful renaissance art museums in the world. There was no time to go inside but I could admire from the outside the statues of the great historical personalities of Florence over the past centuries, starting with Macchiavelli and Leonardo da Vinci.

Not just the big churches, or monuments, even simple doorways of some houses, probably belonging to some noble family, can give beautiful glimpses of paintings and statues.

It was time to go back to the meeting so I walked back to centro Innocenti. In the evening as the meeting finished, it was already dark. Before going back to the railway station, I had a quick look at Santa croce church with the statue of Dante, another famous son of Florence, who used to live around there!
It had been nice day, thanks to the time I had taken off to go around for my tourist visit. I had run around a lot, I had missed my lunch, but in the end it was more satisfying then just going to a meeting!

Here are some pictures from the day: 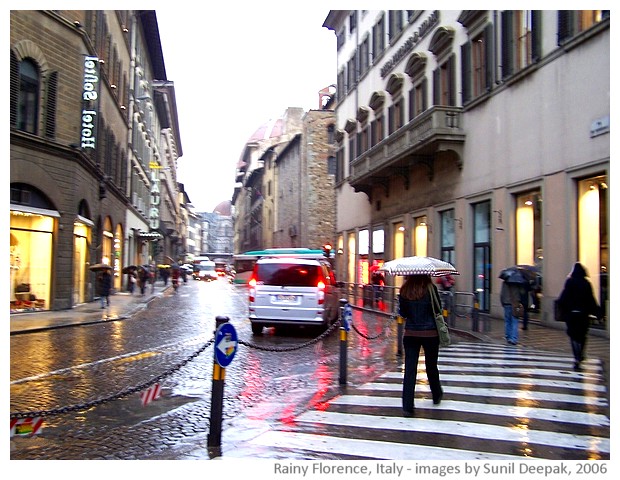 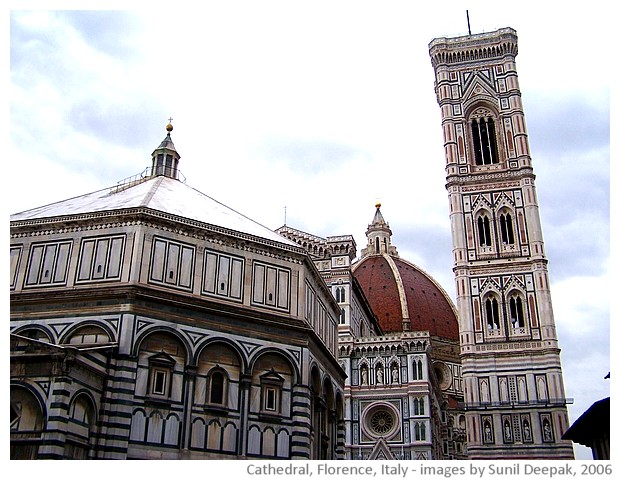 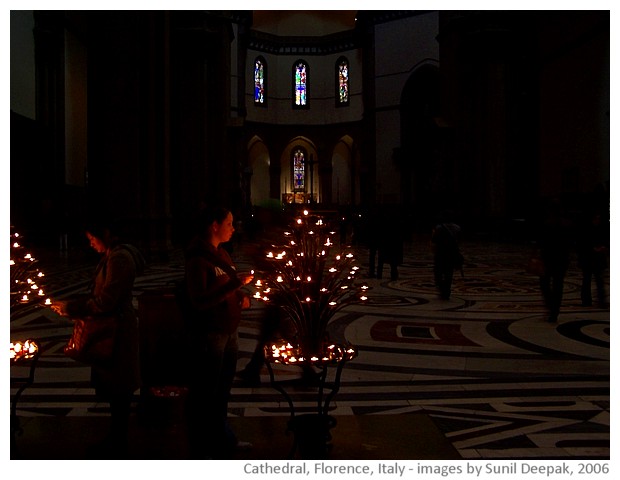 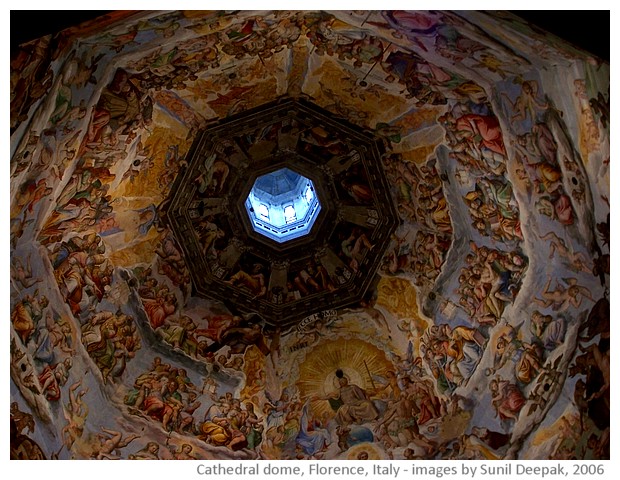 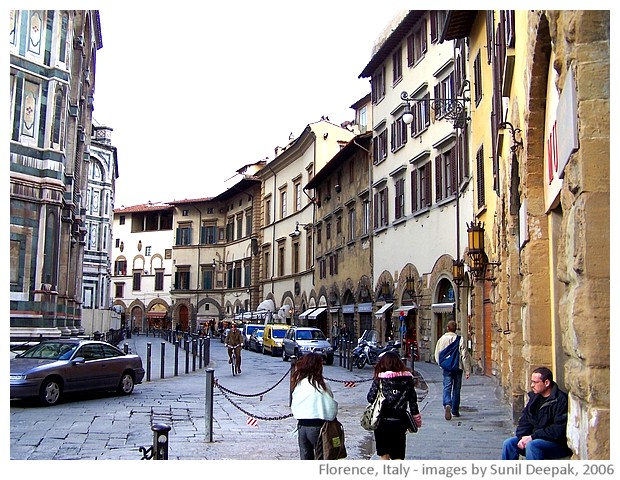 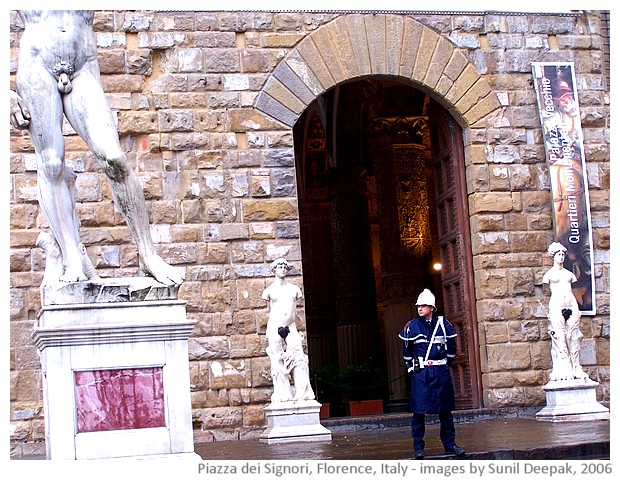 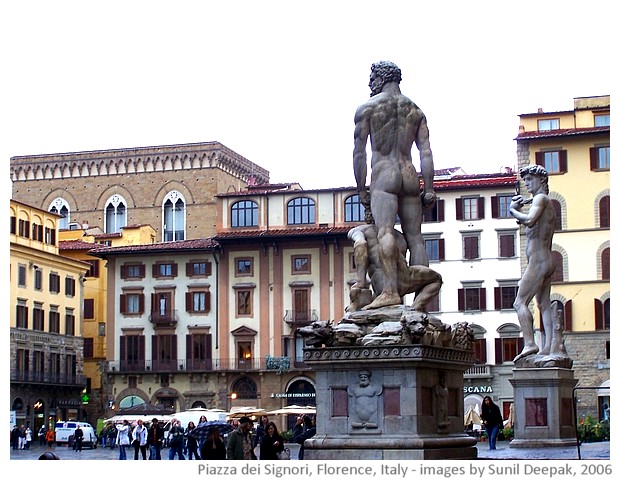 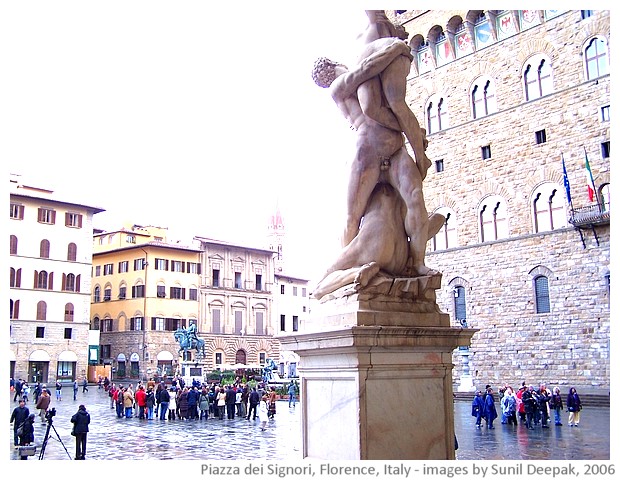 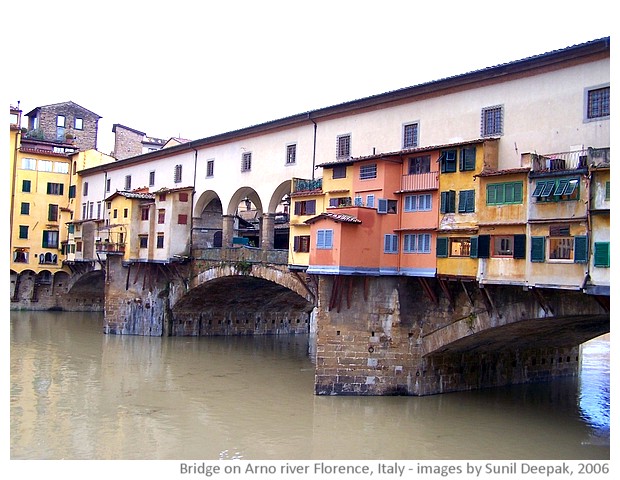 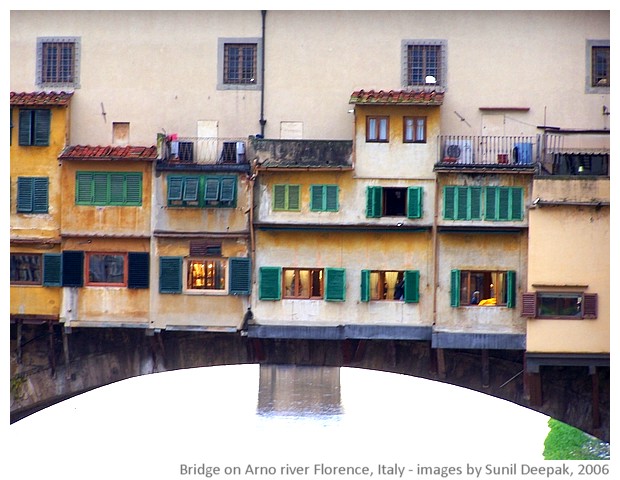 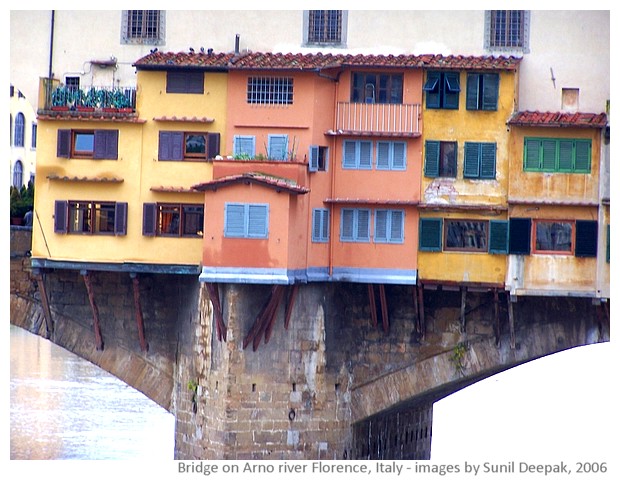 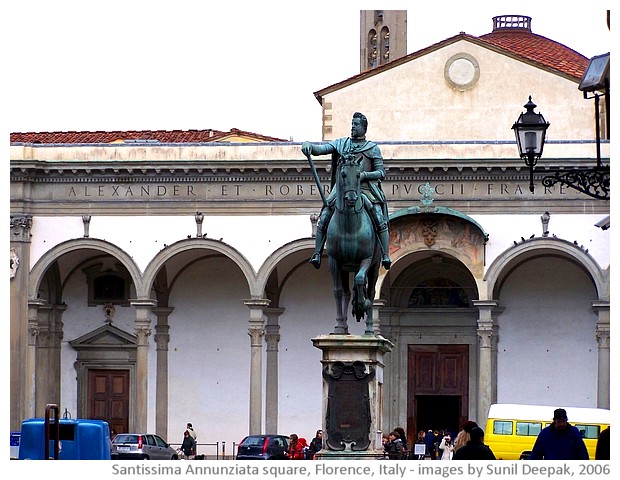 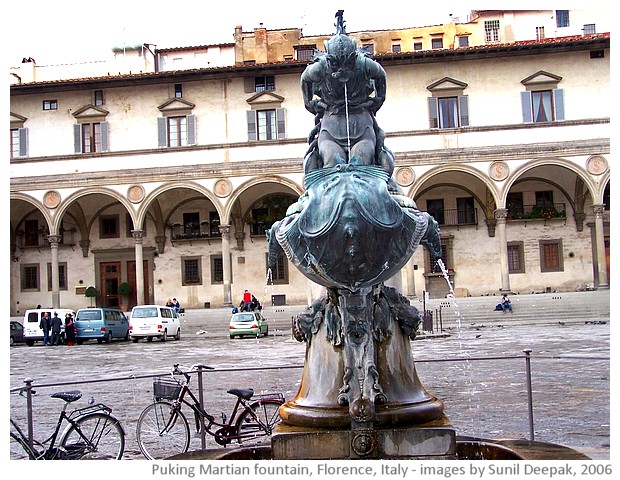 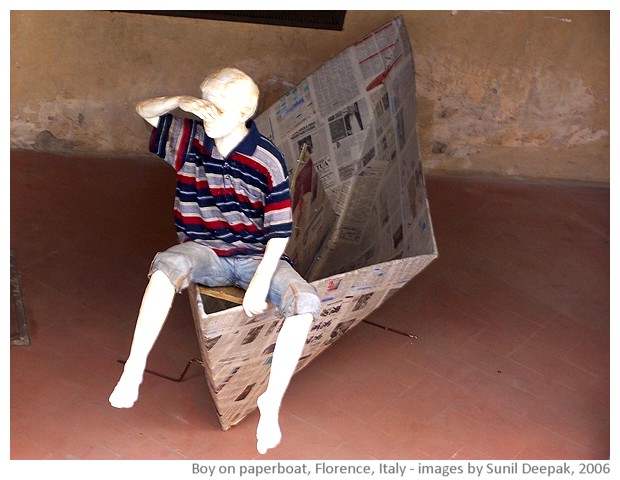 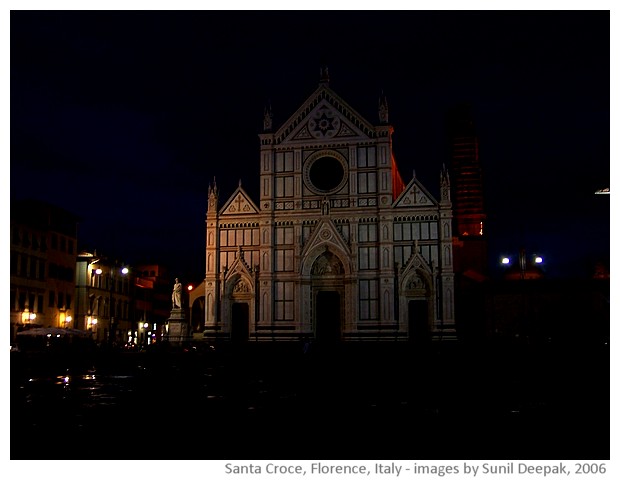