During the night the temperatures still go down to 2-3 degrees centigrade but I can already hear the birds chirp outside my window. They are few and their chirping is blunted by the blinds drawn close and the windows shut tight to keep out the cold. But they are there in the morning, the male birds, testing their songs, doing riyaaz for the mating games that should start any day now. I can imagine their future mates listening to them, shaking their heads with the bemused smiles, waiting for the fun times to begin.

In another 2-3 weeks, their nests will be ready, filled with eggs. By end of March, the hard rock concerts will start, as the baby birds will wake up and start screaming for their breakfast. Just outside my window there are three plane trees. They are one of the favourite places for these birds, and at their peak, their noise matches the cacophony of Chandni Chowk any day.

I don't know why, but noisy birds make me somehow think about the Mangeshkar family. Lata, Asha, Usha and Hriday. I can imagine them as kids, all together at home, chatting, laughing and making noise, chirping and twirling.

Our house is at the corner of our apartment block, surrounded by trees on three sides, all of them taller than our second floor windows. On one side, the window looks out at a row of tall poplar trees, behind which you can see a few lime and pine trees. The living room window opens to a group of maple trees with a lone, tall silver lime in the middle. Yet the birds prefer only the plane trees close to my bedroom, there are no nests on poplars, lime and maple trees.

After the big snowfalls in Bologna in the beginning of February that lasted more than two weeks, over past few weeks, bright sun had come out. But it was still cold and the snow took almost three weeks to melt. Then finally last week, the temperatures improved to a balmy 13-14 degrees centigrades.

Suddenly you can feel that spring is coming. Like a shy bride, her head still covered with a veil, peeking out surreptitiously, touching the water in the puddle with her toe to see if it is too cold. Nude thin branches of dark trees, like fakirs doing penance, have tiny gems that can be easily missed if you don't look for them. In another week, they will open into tiny tender green leaves. Roses in the garden in front of our front door have a couple of newly born red coloured leaves at the tip. 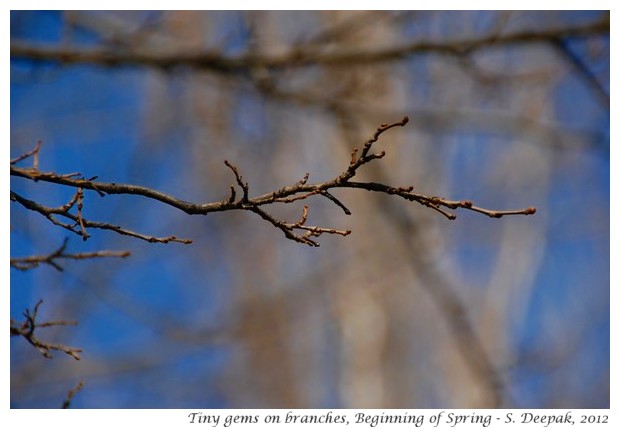 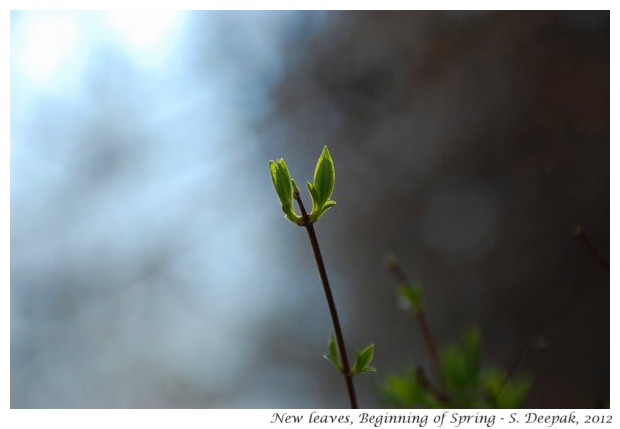 The evergreens don't need to wait for the new leaves to come out, they are already getting ready with their flowers. Among the trees in our park that had lost all their leaves during winter, there is just one tree, that has no leaves but is already full of flowers. They are simple looking flowers, without any bright colour or perfume. I think that it is a beech tree but I am not sure.

Why did this tree not come out first with leaves, like the other trees, I wonder. May be it wants to take advantage of this time, when it does not have to compete with other more beautiful flowers, so that birds and insects can help in its pollination?

In the park, there not many children, perhaps because it is still cold. There are just a father and son duo, doing martial arts practice with a stick. The man moves the stick. It twirls in his hands in fluid dancing motions, as it cuts the wind above his head. The child looks at the father and tries to copy him. The man repeates the movements, doing it more slowly this time, showing the boy where to put the feet and how to turn at the waist. Watching them is so beautiful.

Brando, my dog keeps me company in the park. He is completely deaf and can hardly see because of cataract in both eyes. He waits for me patiently, while I click pictures. Till a couple of years ago, it was difficult to go out with him on photography trips because he was full of testosterone and fought with all the male dogs that we encountered. Now he is quiet as lamb, happy for any chance of sitting down and resting.

A man with his dog passes close but Brando does not look up at that dog. Earlier they used to get into barking matches, refusing to stop. "He has become deaf?" the man asks me, shaking his head.

"Oh, he won't last very long now. Remember my other dog, the white one? He became like that, couldn't hear or see and within one month he was gone. This one will also go quickly", he says mournfully, shaking his head.

"As long as he does not suffer", I murmur as we walk away, not telling him that Brando has already been deaf and blind for more than a year. 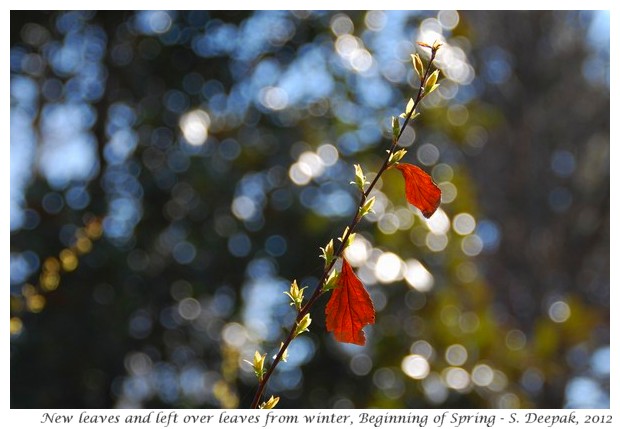 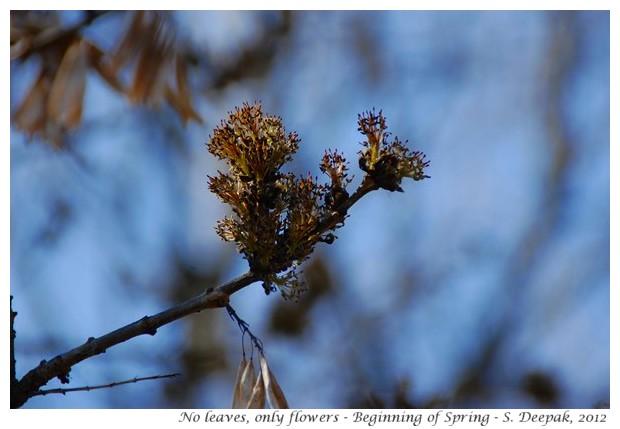 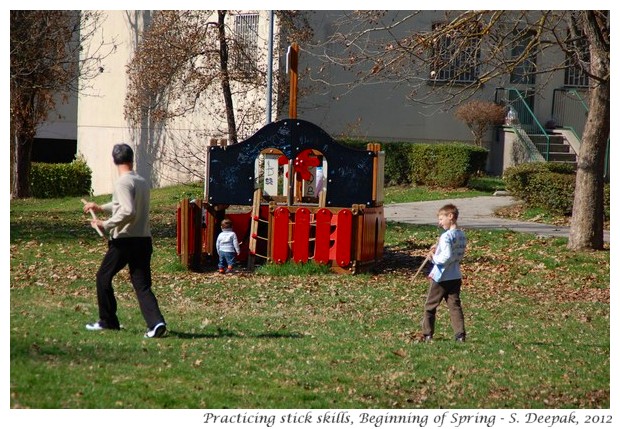 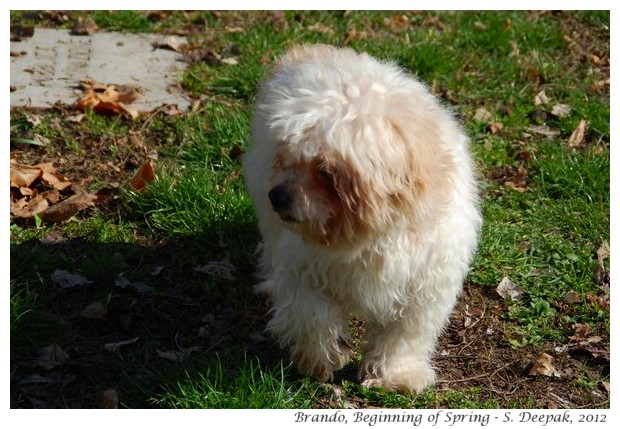 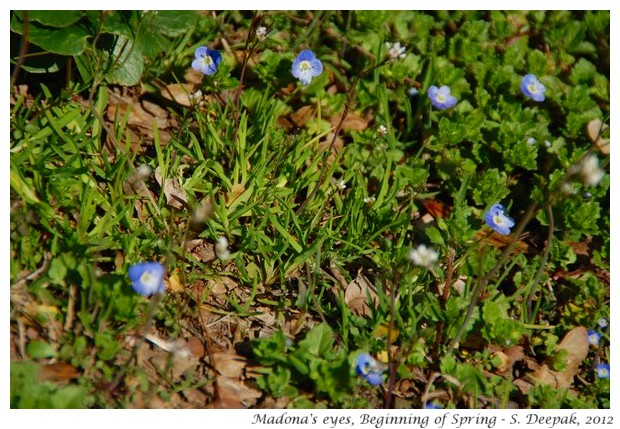 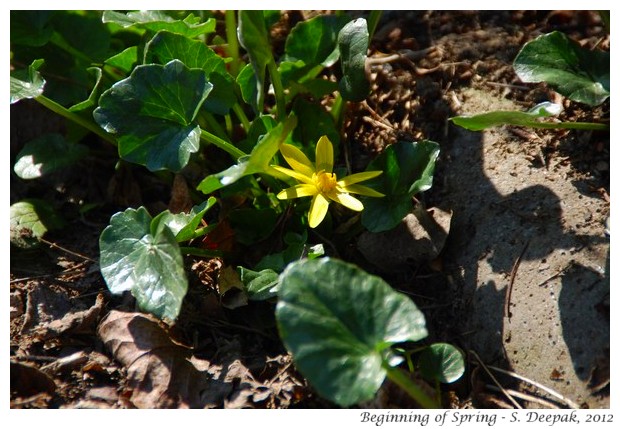 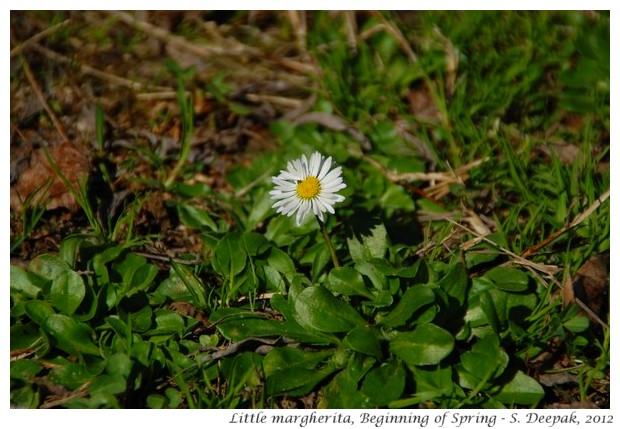 At the other end of the park, where sunlight falls for the whole afternoon, there are already some flowers. Tiny white margheritas with yellow circles in their centre. Tiny purple coloured flowers are also there that the Italians call "occhi della madonna" (Madona's eyes). I can also see a few small white flowers and a couple of shining yellow star like flowers.

By next week, there will be hundreds of these flowers. In 2-3 weeks, there will be hundreds of thousands of tiny flowers, covering every inch of the park, along with cherry, jasmine and horse chestnut flowers on the trees. And the spring would have forgotten its veil, admiring herself in the mirror, laughing with abandon. And early in the morning, I will wake up with the cacophony of the chirping birds.