A day in the Alpine paradise of Maranza

During our holidays, one day we went to Maranza, high up in the Alps near Italy's border with Austria. It was a beautiful day, and it was  an amazing place with verdant hills and incredible views of alpine valleys and high mountains. 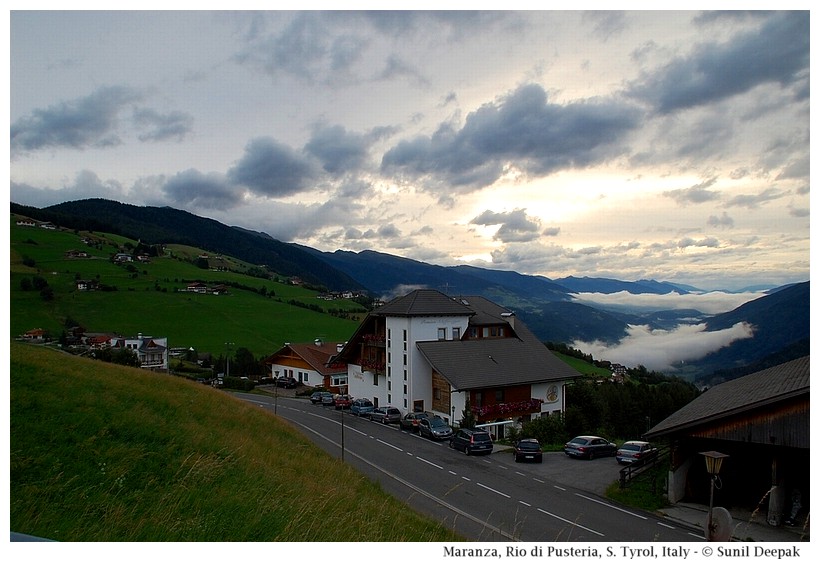 Maranza is a tiny mountain commune with just 450 inhabitants. It is located in the mountains above the Isarco valley in South Tyrol (Alto Adige) region of north Italy, close to the border with Austria. 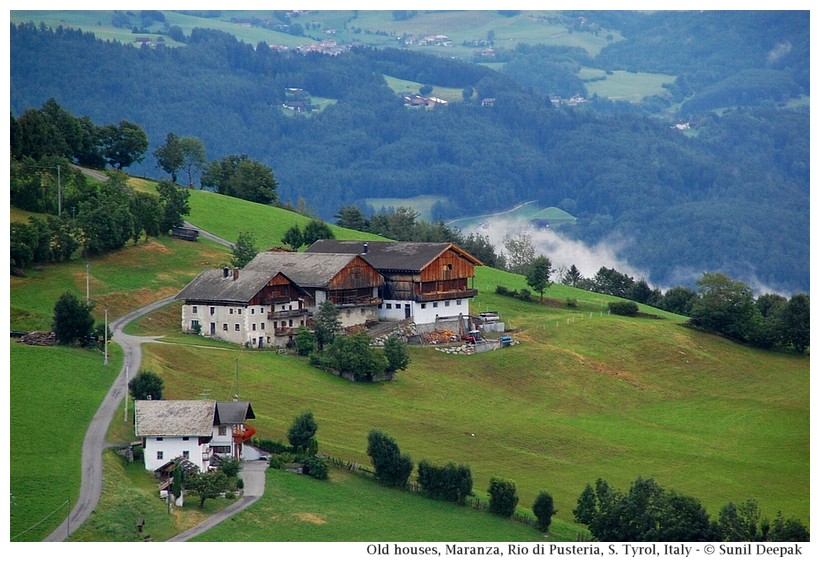 We started after lunch. The cabin-car journey took just 10 minutes. It was a very thrilling ride with amazing views. However, if you are afraid of heights, do not take the sky-lift!

The initial half of the cabin-car journey was sloped at an angle so it passed just above the trees and close to the hills. As we rose up, below we could see the Rio di Pusteria town and the lake. 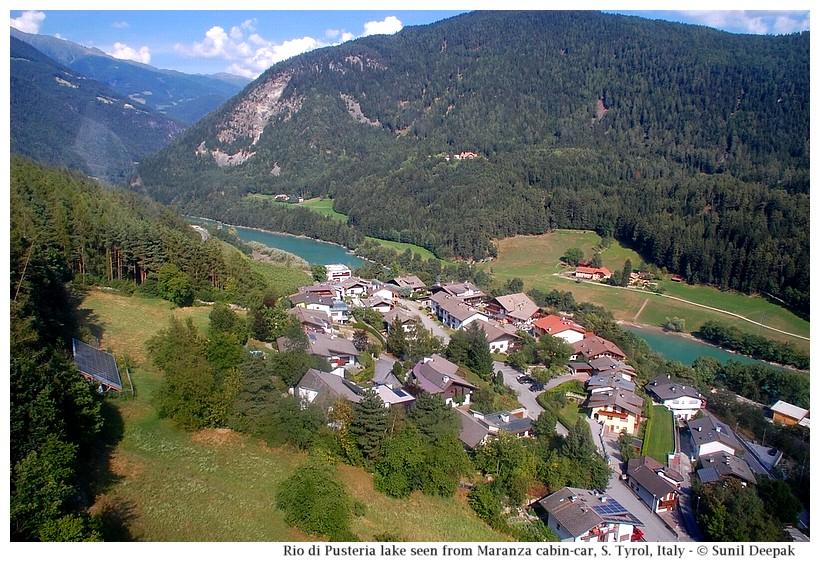 The second half of journey was almost vertical with breath-taking views of the town below. Some persons were afraid of looking down during this part of the journey. For about 5 minutes, it felt as if we were floating in the air. So if you suffer from acrophobia, you are warned. 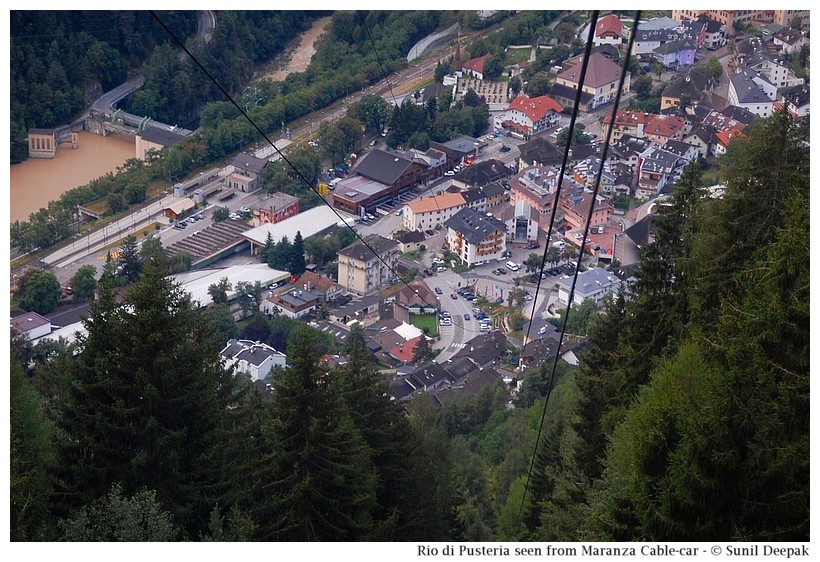 A walk towards Gitschberg mountain

As we came out of the cabin-car station in Maranza, we found ourselves in an open area. It was a nice and sunny day. We were in high plains with scattered quaint wooden houses with their balconies overflowing with flowers. 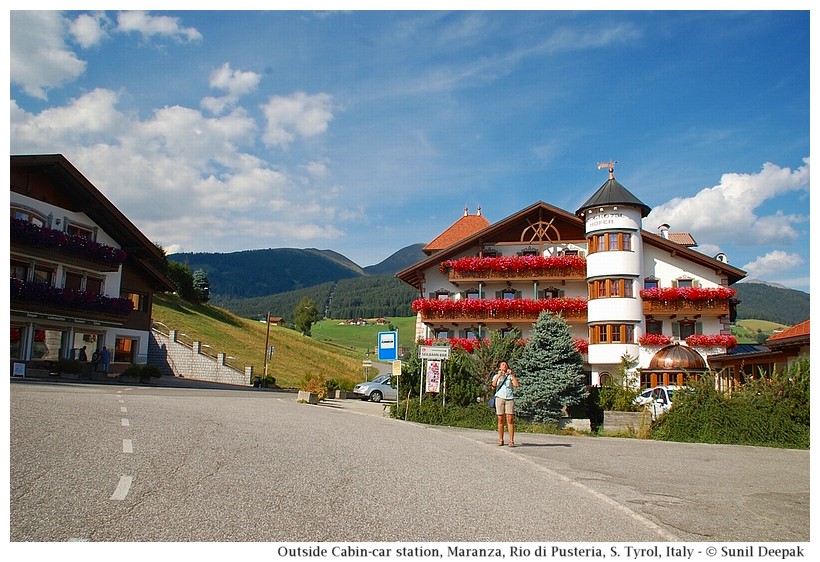 To the left was a road going to the San Giacomo church, known for its legend of the three virgin saints. Another road on the right, went towards Gitschberg, the high mountain above Maranza. We took this second road.

Along the road, there were some old wooden farm-houses with barns, like the one in the image below. 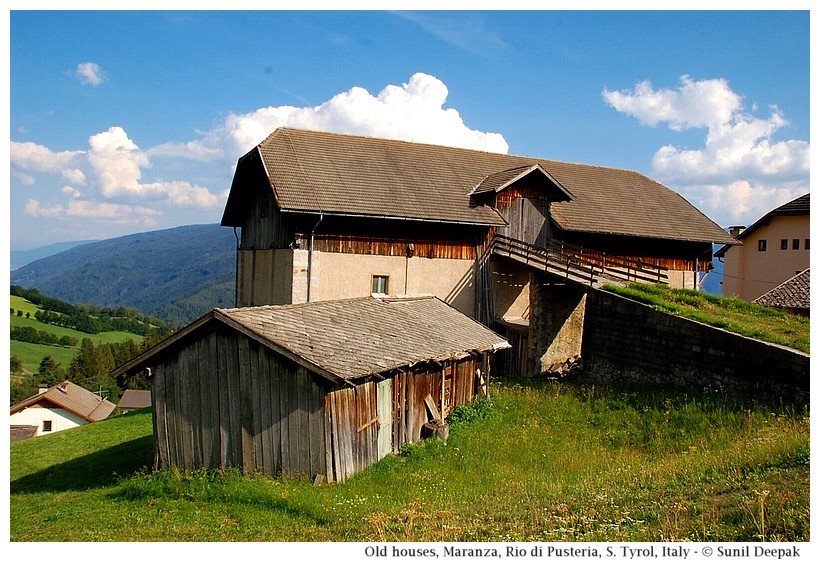 The view of the tiny houses filled with flowers across the green hills was beautiful. In one of the hotels below, we could even see a swimming pool with people sitting around in bikinis.

Our walk ended at the cabin-car station, which took the people to the top of the Gitschberg mountain about 800 metres above, almost like the difference between Rio di Pusteria and Maranza. 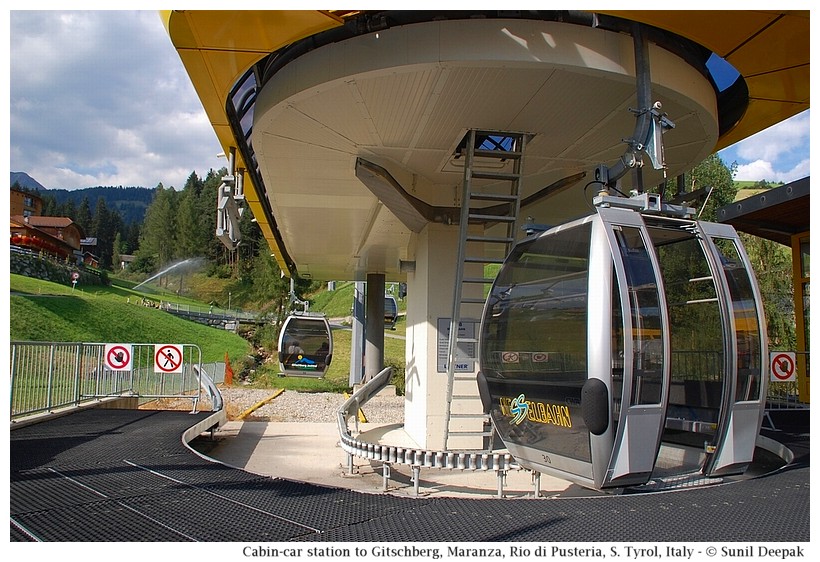 In winters these cabin-cars are used for reaching the skiing slopes. In the summer, tourists use them to go up to the mountain for the panoramic views. Our sky-lift free-pass was valid on these cabin-cars as well. However, as we only had that afternoon in Maranza, we decided not to go up to Gitschberg and instead explore the local surroundings. 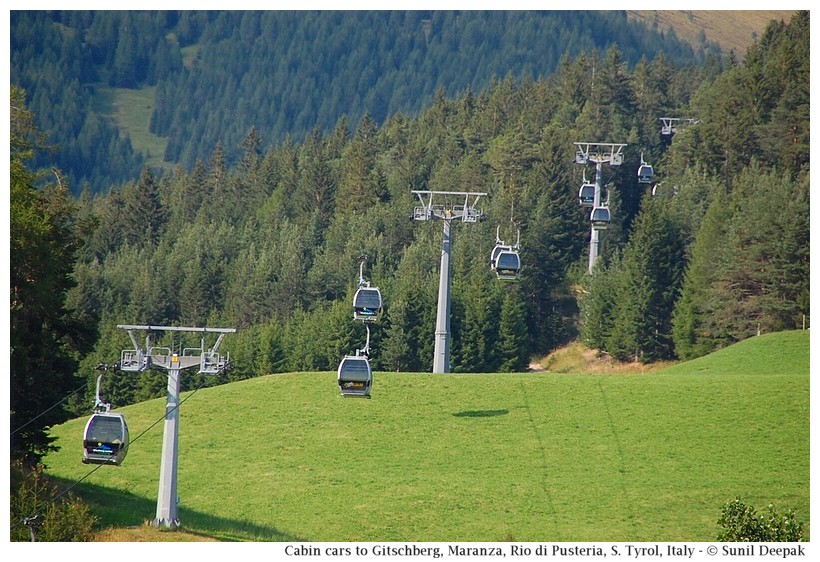 We found a small family run restaurant near the cabin-car station, where we stopped for a coffee and a delicious cake, while watching the cabin cars going up and down.

A walk on the Panoramic road

In Maranza you have different options for walking and trekking. You can walk to Vals (Valles) and then take the cabin-car to go towards the skiing slopes of Jochtal. It is also possible to follow one of the trekking routes. For example, trekking route n. 16 takes you to Wiersehutte in about an hour and a half. More adventurous persons can take the trekking route to Seefeld lake, which requires about 4 hours of walking and mountain climbing.

Instead, we decided to be more relaxed and take one of the roads going up the hill in front of the cabin-car station - the road was called Via Panorama. With old wooden fences and occasional houses, it was a beautiful road (image below). 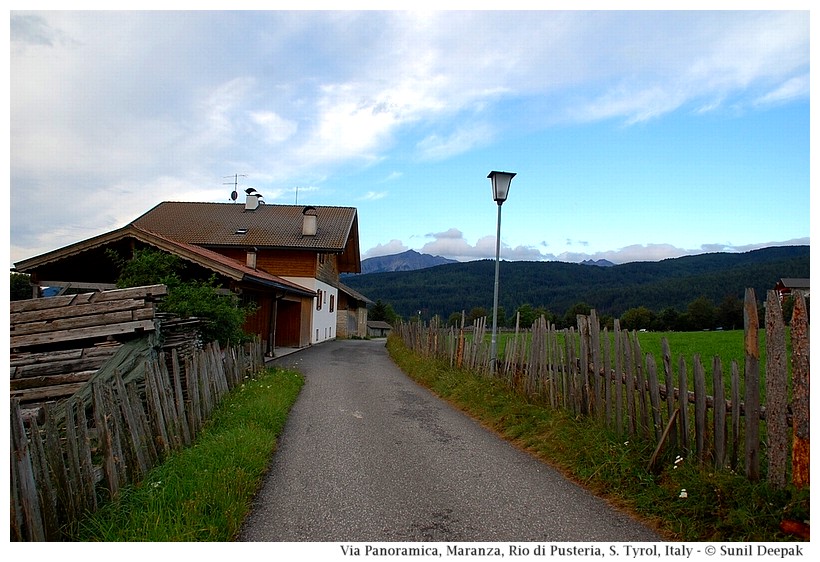 True to its name, Via Panorama also led us to beautiful views of the surrounding Alps as you can see in the image below. 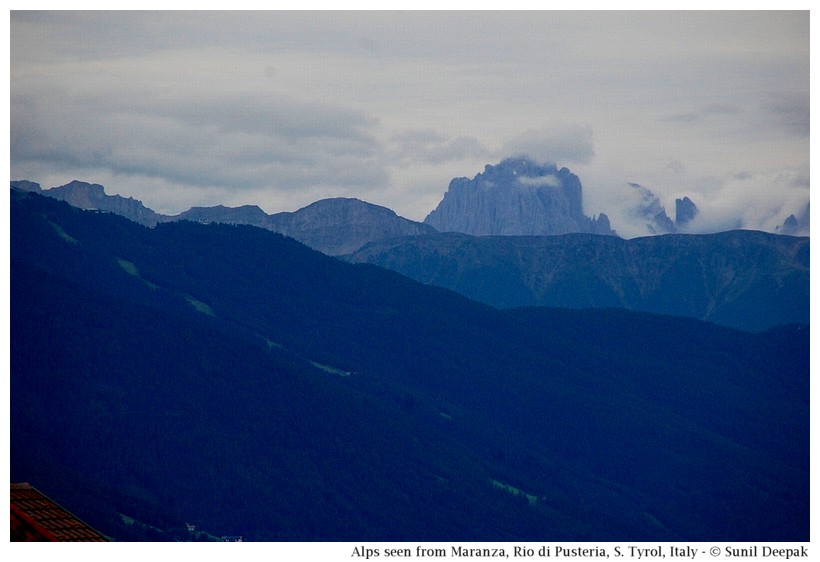 Below us, to the left we could see the Maranza town and the San Giacomo church. It was an unhurried and relaxing walk. The road did go up and down, but it was not a tough walk. 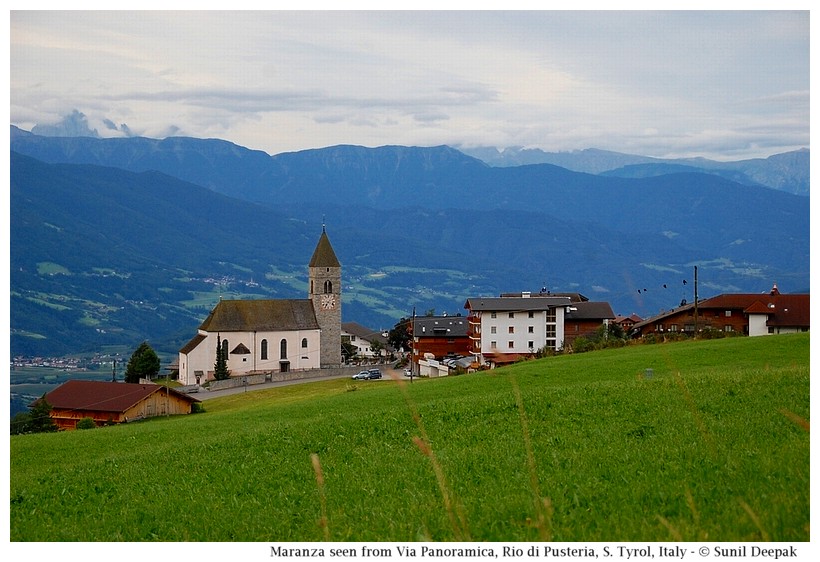 From Via Panorama, passing through Viccolo Kossler, Via Aigner and Via Aussereck we went all around and came to the San Giacomo church from the back. 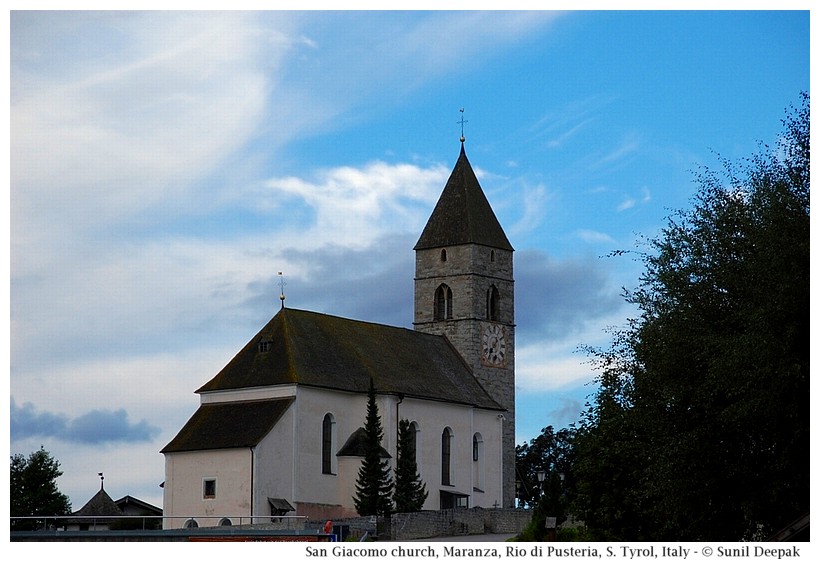 By this time, there were a few clouds hiding the sun. It felt colder and evening darkness was arriving. We could see some thick white clouds creeping in the valleys below. 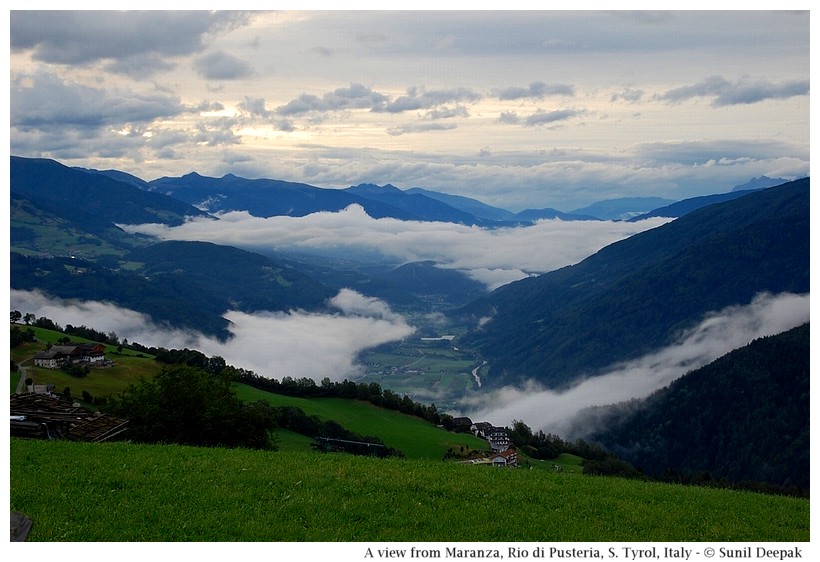 So we decided that it was time for us to go down.We went back to the cabin-car station and took the sky-lift. The journey back to Rio, floating in the sky-lift was as thrilling as it was on the way up.

In my memories, the day spent in Maranza is an ideal holiday - filled with verdant hills, flowers and quaint houses.

I wish that we had more time to visit Gitschberg and Jochtal mountains. Perhaps we will have that opportunity during another holiday! 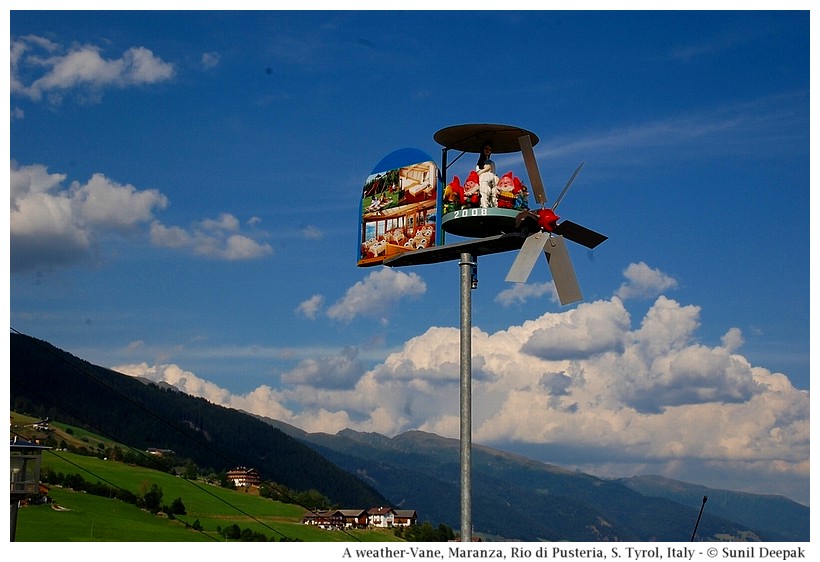 I want to close this post with an image (above) of a beautiful weather-vane I saw in Maranza - it has tiny statues of Snow-white and the seven dwarfs.